Comida Catering Co Is Moving Out of the Central Market

The Adelaide favourite is parting ways with its popular market stall in favour of a stronger presence in the East End. 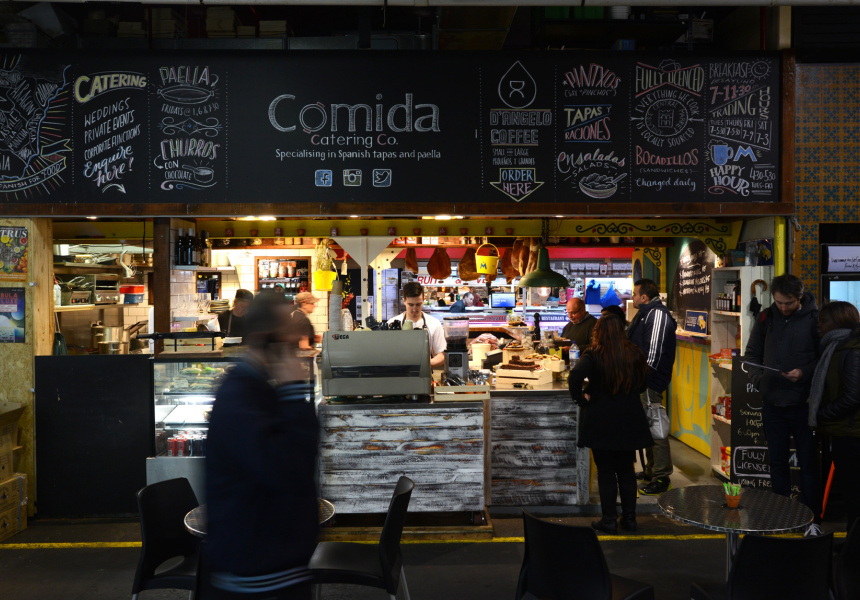 After almost five years, Central Market favourite Comida Catering Co (and its famous paella) is moving out of stall 11.

Owner and head chef Brad Sappenberghs tells Broadsheet he chose not to renew Comida’s lease due to the redevelopment of the adjacent Central Market Arcade, which will begin next year. “The redevelopment of the arcade put me off a fair bit,” he says, adding the current traders “are all dubious as to what’s coming next”. “It’s all getting totally demolished, and effectively starting again from afresh.”

Sappenberghs forecasts future disruptions based on those he experienced during the installation of Chemist Warehouse (directly opposite Comida). “Not a lot of people were overly keen to sit there [at Stall 11] …There were power tools, there was dust.”

That’s not to say he’s shutting up shop. Instead, he and the team will consolidate their presence at Roxie’s, where they’ve been operating for 12 months after moving into the Chateau Apollo kitchen next door.

Sappenberghs says he’ll bring most of Stall 11’s existing menu over, joining Roxie’s current line-up of tapas, raciones (larger portions) and wood-oven pizzas with a Spanish slant. He also promises dedicated paella nights, and plans to tap into the East End brunch scene. The idea is to “punch through [Roxie’s] brick wall”, he says, displaying a fridge full of “our classic little brekkies that we do in the markets”. On weekends, you can expect a “full breakfast of plated eggs [and] poachies inside Roxie’s”.

In the meantime, Comida will continue to trade at the Central Market until September 21. Sappenberghs and the team will say goodbye to the site with a pintxos party this month (date still to be determined) in celebration of all the “regulars and suppliers who've supported us over the last five years”.