Coffee Branch Is Back

One of Adelaide’s first specialty espresso bars has reopened under new – but experienced – management. 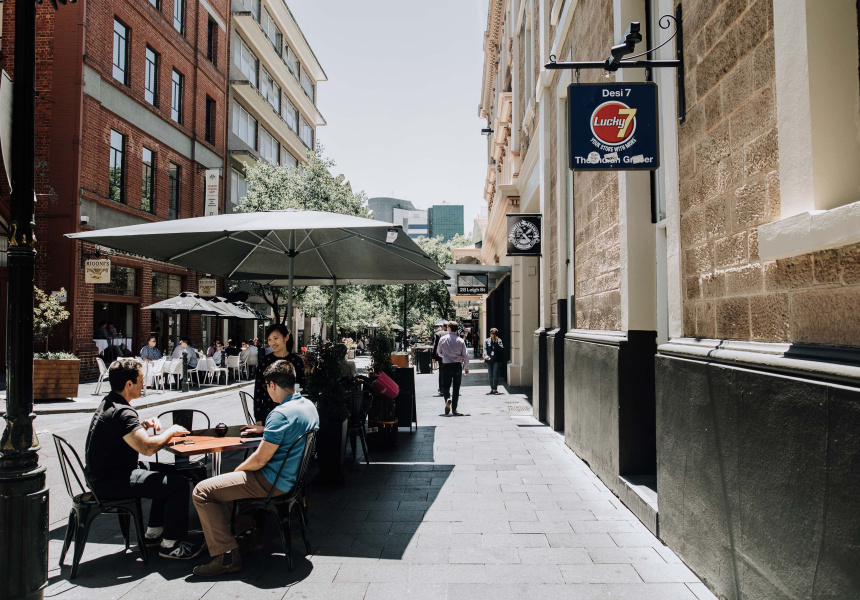 In May, a “closing for renovations” sign appeared in the window of one of Adelaide’s most beloved coffee shops. The doors quietly closed and Leigh Street icon Coffee Branch fell dormant.

It became clear the sign was a euphemism. Though the business was never on the market officially, owner Aaron Martin was putting his feelers out for someone to take it over. Word passed along the industry grapevine, eventually reaching Caffiend Coffee Company’s Kostas Trakas. We’re glad it did.

Trakas was weeks away from opening his second Caffiend store on Synagogue Place, so the timing wasn’t great. But, “When the lease came up [Martin] was ready to move on and I was ready to take over,” Trakas tells Broadsheet.

The coffee shop reopened in November. It’s pretty much the Coffee Branch we’ve always loved – same name, same poky layout – with just a few tweaks to the decor and a fresh coat of paint. Most of the long-time fixtures (including barista John Langdon) remain.

One key difference may not be obvious to many. A new San Remo espresso machine has replaced the hardworking Synesso. And, more importantly, the coffee coursing through it now comes courtesy of Caffiend (of course). Coffee Branch had almost exclusively served Five Senses coffee from day one. Alongside Bar 9, Coffee Branch was influential in establishing Adelaide’s specialty-coffee culture, and Five Senses was a big part of that.

Unlike many of its contemporaries Coffee Branch never cared too much for food – what it did offer was simple. In this new guise, the menu has been expanded slightly. There’s a bacon waffle-basket with haloumi, brioche bun with all the breakfast trimmings, rudimentary smashed avocado, and granola.

But grab-and-go is still the flavour of the day. Swing by for baguettes, savoury and sweet croissants, pastries, cakes and homemade slices.

Whistle & Flute’s Josh Baker owned Coffee Branch before Martin. “I’ve got a huge amount of respect for what [they] originally did with the place,” says Trakas. He calls it, “One of the seminal venues [in Adelaide].”

Taking over the business “was a no-brainer as far as we were concerned” he says. That “we” is his family. Trakas is busy managing (and covering the distance between) Caffiend’s Hahndorf and CBD locations. His father-in-law, Leon Glouftsis, is officially running Coffee Branch, supported by Trakas and his wife Tamika (Glouftsis’s daughter).

It’s always been a family affair. Baker often worked at Coffee Branch with brothers Tobias and Jacob. The new custodianship feels apt: it’s the closing of one circle and the opening of another.