Pastry chef Chaveli Goya has drawn on memories of her great-grandmother in Chile to create a homey cafe serving original tea blends (including one that tastes like a cinnamon bun when milk’s added), plus chiffon sponge cakes, cruffins, Chilean pastries, Basque cheesecake, and more. 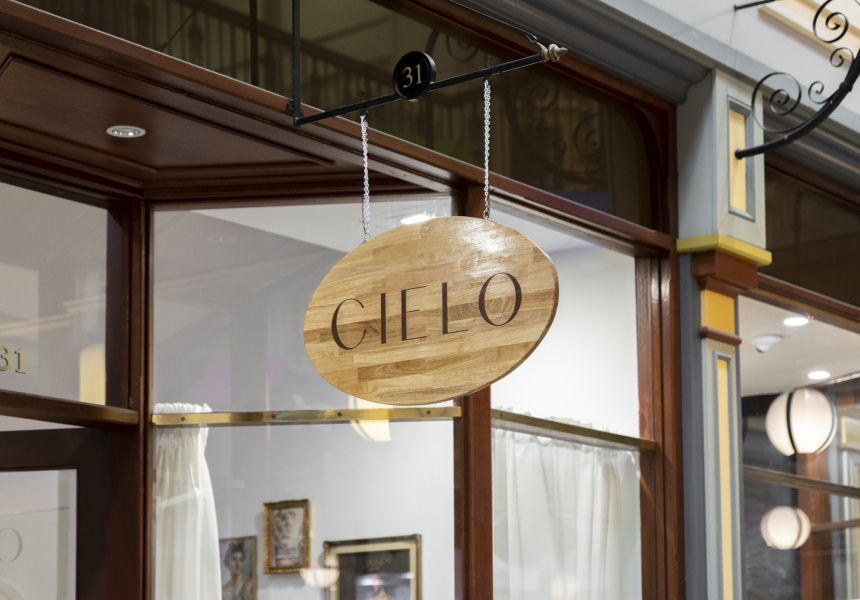 When Adelaide Arcade opened in 1885, an original design feature was its tea rooms, occupying a spacious chamber below ground and accessible only by an ornate set of stairs (that is still visible today, below a glass floor). More than 100 years later, a new venue – Cielo, named after the Spanish word for sky or heaven – immediately evokes that history.

“I get people that, as soon as they come in, mention the old tea rooms, or say ‘There’s nothing like this anymore,’” says owner and pastry chef Chaveli Goya, who previously worked at Shibui Dessert Bar, Chicco Palms and Appellation at The Louise. She also runs her own tea business, Fresia and Cassia.

For Goya, who has always dreamed of opening a venue on a farm, Cielo is mainly the result of luck and timing. “I was trading [with Fresia and Cassia] at Plant 4 Bowden,” she explains. “They asked me if I could do pastries, so I started doing that, and then a customer who worked for Renew Adelaide came in.”

That customer would eventually persuade Goya to apply for the initiative, which connects people with property owners to trial their business concepts. It helped that the Adelaide Arcade location came up, too. “I’m obsessed with the fact that I’m in the arcade, because it is such an old building,” says Goya.

The former retail shop is now a relaxing, gentle space filled with old-world charm. Look around and you’ll notice thoughtful details: pastel vintage chairs, vases of flowers, gold-framed paintings, a record player. The winsome room feels entirely appropriate in the arcade, and homely – the result of Goya’s efforts to reflect the memories of time spent in Chile with her great-grandmother. “It’s all based on my great-grandma,” says Goya. “I wanted people to feel like how I felt when we had tea at her house.”

Gathering with family and friends to drink tea is incredibly popular in Chile – in fact, tea time is something of a fourth meal. It was months spent with her family in Chile that sparked Goya’s passion for tea; re-creating the tea she used to drink with her great-grandmother would form the basis of her tea business and eventually Cielo. Order the signature blend – a black tea with cinnamon – to taste the tea that started it all. “It sounds so simple, but the way that it brews is so nice,” says Goya. “When you add milk to it, it’s like a cinnamon bun – I get people who say that it’s like a pudding, too.”

Just above the tea room is a small kitchen where Goya bakes all of her pastries on-site. “I can’t even explain how small it is,” she says. “It would be an office for normal people that would have a retail space, but we have an oven in there and two benches. And a little storage shelf, and two fridges – but they’re stacked on each other. It’s tiny, but we manage to make everything in there.” With the help of her mother, she bakes a line-up of croissants, cruffins, Basque cheesecake, Chilean pastries with house-made caramel, and popular chiffon sponge cakes filled with a preserved rose-petal jelly.