Silvia and Peter de Marco know their way around a pizza oven. That’s why they went straight to Naples and “The God of Pizza Ovens”, Stefano Ferrara, for their new cooker. “She’s a little monster,” explains Silvia. “She’s the heartbeat of Chicco Palms.”

The siblings, with Phillip Tropeano, Natalie Albany, Ernesto Sestito and Domenic Maurici (who between them run Pizza e Mozzarella Bar, Borsa Pasta Cucina and Chicken and Pig) form the team behind Chicco Palms. It’s a California-inspired pizza restaurant and bar with a breezy, Palm Springs vibe. We last visited the site – on Henley Beach Road in Brooklyn Park – back in October. Since then the few remnants of the former Barnacle Bill identity have been removed. Standing in their place is a new eatery offering old-school hospitality.

Roman-style pizzas and Italo-American dishes – such as spaghetti and meatballs, gnocchi pomodoro and home-baked panini (served at lunch only) – make up the menu. The drinks selection firmly grounds Chicco Palms in a contemporary Australian setting. Wines are from Italy and SA only, and the tinnies are served in custom, red stubbie holders, which Silvia says will be available to buy soon (“so please stop pinching them”).

There’s also the Palm Freeze – a frozen cocktail with rum, mango, white wine and lime – that has “next stop, the beach” written all over it.

Chicco Palms also offers a giro (literally “to go around”) dining option for groups of four or more. For $25 a head you get a selection of pizzas to share. The $35 option comes with antipasto too. And for $45 you get the lot – pizza, antipasto, pasta and roasted meats. “The aim is to have you rolling out the door,” says Silvia. “We’re all from southern-Italian backgrounds and it’s embarrassing for us to see no food leftover.”

MASH Design’s James Brown – who also holds a stake in the project – has remodelled the former fish ‘n’ chip shop into something very cool. A large extension with porthole windows and a crisp coat of white paint now stands behind a besser-brick façade. Vintage photographs hang inside and kitsch checkerboard linoleum covers the floor and walls. There’s a resemblance to fellow dough-slingers Sunny’s, and even Melbourne’s Good Heavens, which also cites Palm Springs as its key inspiration. With our similar summer climates and penchant for daytime drinking, Cali-cool is understandably on-trend.

Silvia says she loved the suburban bar culture of Melbourne, where she lived for seven years, and sees Chicco Palms as a step towards decentralising the scene here in Adelaide. So far the local response has been overwhelming and it’s matched by the number of people travelling across the city to try pizza, Chicco style. 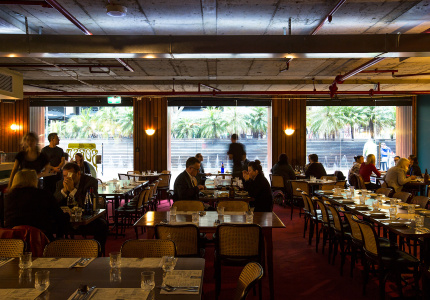