“Sustainability is a great by-product, but we’re still trying to make the best burger.” 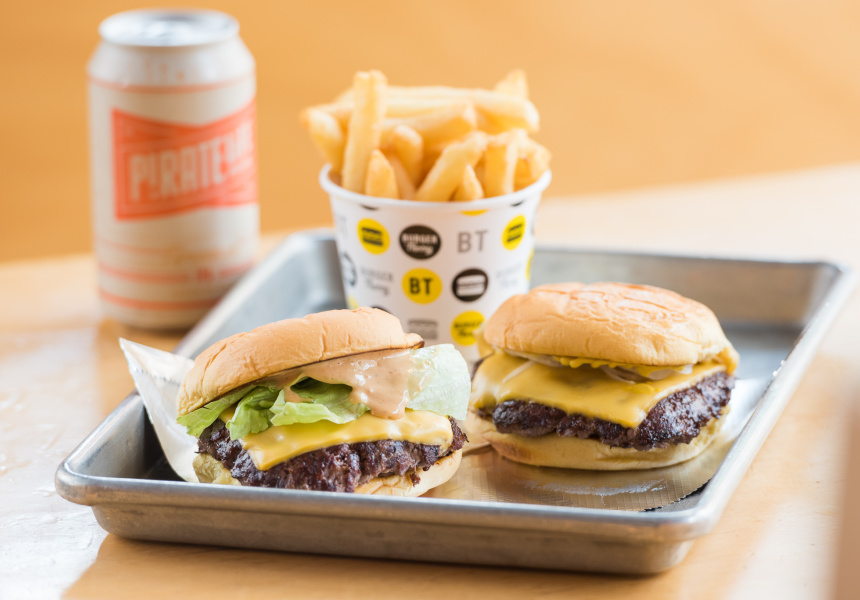 “The beef dynamic has totally changed,” says Robert Dean, co-founder of food truck-turned-burger joint Burger Theory. “All the cuts we were using became more popular, which put pressure down the line,” he says. Beef prices increased by 60 per cent a couple years ago. Dean and business partner Dan Mendelson had three choices: up their prices, use cheaper cuts, or opt for something else entirely.

Barbequing a few beef-and-kangaroo sausages from Something Wild got their cogs turning. Earlier this month a rebranded Burger Theory opened its doors and is grilling kangaroo-based patties in place of its signature house-ground-beef blend. A sign on the wall states its environmental impact is “the lowest of any patty on the planet.”

“The first [the beef patty] comes from a familiar but introduced species raised for slaughter on cleared land; the second [the kangaroo patty] comes from a small percentage of a native species culled to manage its population,” the team states on its website.

An increase in kangaroo numbers has initiated calls to up incentives for shooters. But the choice to serve roo-based patties doesn’t make sense for everyone.

“Where some of the sensationalists come from is any farmer can get a license to shoot roos,” Dean says. “That’s not for meat. They’re not trained. The guys harvesting for meat are almost surgical … they’re far more efficient and humane.”

The menu has gone from 10 to four options (chicken and pork also got the chop; the falafel burger remains as the vego option). But Dean promises rolling specials, the best of which will end up on a secret menu.

The online backlash hasn’t translated in-store. “So far so good,” Dean says. “The vast majority of people who make it through the doors enjoy it ... we’re exceeding numbers at this time on other years.”

Kangaroo aside, “some regulars are no longer regulars” because of the change in burger style, he says.

So, why not just add a roo burger to the existing menu? “We’re all-in here,” Dean says. “We genuinely think it’s better than our previous burgers. If we’re thinking that but hedging our bets, I don’t think it’s ‘gonna cut it.”

Long-standing beef supplier Richard Gunner of Something Wild grinds the hybrid patty. It adheres to the same “golden ratio” as before – 80 per cent meat, 20 per cent fat – but blends mostly kangaroo meat with fattier cuts of beef, which help to bind the patty.

You wouldn’t pick it in a blind tasting. “You don’t really notice the roo,” Dean says. “There’s just something extra to the beef flavour.”

The choice to import a potato bun from the US might be inconsistent with the brand’s newfound sustainability. But, despite appeals to Tip Top, no one in Australia bakes anything similar. “Sustainability is a great by-product, but we’re still trying to make the best burger,” Dean says, frankly.

There are contradictions in their message, but the result – a better burger with less reliance on farmed meat – is ultimately a good one.

Kangaroo isn’t the only native (or wild) ingredient on offer. Karkalla (aka pigface – a native succulent) substitutes pickles in the cheeseburger, and there’ll soon be wild-bore bacon. “You can really only get [these ingredients] at high-end places,” Dean says. “[But] there’s an abundance of the stuff.

“Is the burger the platform to introduce them to the mainstream?” We’ll be watching keenly.