Rally your friends and family for some good old-fashioned Italian hospitality – but a helluva lot rowdier. “It’s like you’re at … someone else’s wedding. You don’t have to ask if you want another glass of wine.” 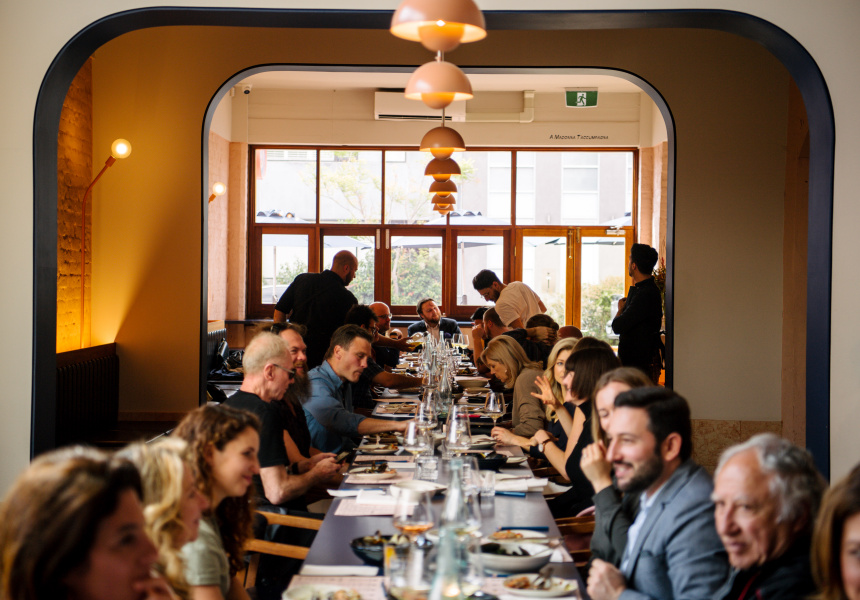 Bingo reminds me of one thing: school camp. So, you’d expect something just as drab from the southern-Italian equivalent – tombola – right? Wrong.

The Neapolitan game is the star of the show at a new monthly series of long-table Sunday lunches at Madre, the urban spin-off of McLaren Vale pizzeria Pizzateca. And since partaking last month, I’ve been itching for another round.

Before I even step foot in the door, a Cynar Spritz lands in my hand. With this kind of welcome, you can expect something a helluva lot rowdier than the usual Madre experience. “Think of it like this,” says co-owner Tony Mitolo, “we’re in Naples now, where you’re gonna spill some wine on your collar and some olive oil on the table”.

Forty of us take our seats around one long table. Handsome placemats spell out the agenda for the afternoon. There’s a progressive, six-course menu; matched – and free-flowing – vino and cocktails; and a bingo-like tombola board.

We kick off with platters upon platters of antipasti, transition to seafood with zesty marinated octopus and pancetta-rolled prawns, then hit the killer crisp-skinned porchetta and zucchini scapece combo.

Mitolo isn’t mucking around when he says “free-flowing” drinks. “It’s like you’re at your uncle’s or your nonna’s – or someone else’s wedding,” he says. “You don’t have to ask if you want another glass of wine.”

Then there’s the tombola. In between courses, Madre’s head honcho Ettore Bertonati emerges from the kitchen to shake up and pull numbers from a wicker tombola drum. It starts out pretty tame. Admittedly, I’m more interested in the porchetta. But Mitolo reckons “it’s the perfect way to break down barriers between people who don’t know each other – because everyone gets so loose”.

He’s not wrong. By the final round, and after making a last-minute comeback, I’m many drinks down and much more invested in the outcome of the game than I could have ever expected. (And I think it’s fair to say the same for my very vocal dining companions.)

My game face lapses only momentarily as Bertonati blankets the table with his Neapolitan-style pies (made with seawater). So, when someone yells “tombola!” from across the room – claiming the quintessentially Italian prize of freshly baked bread and wine – I’m cut. It’s clear my southern-Italian roots have taken hold, so I do as any good Italian would: wallow in the dessert triad of panna cotta, rum baba and cannoli.

Madre’s next long Sunday lunch is on November 15. Tickets cost $180 and are available online.