The Festival at Basket Range Hits This Weekend

A celebration of the most down-to-earth winemaking culture in Australia. 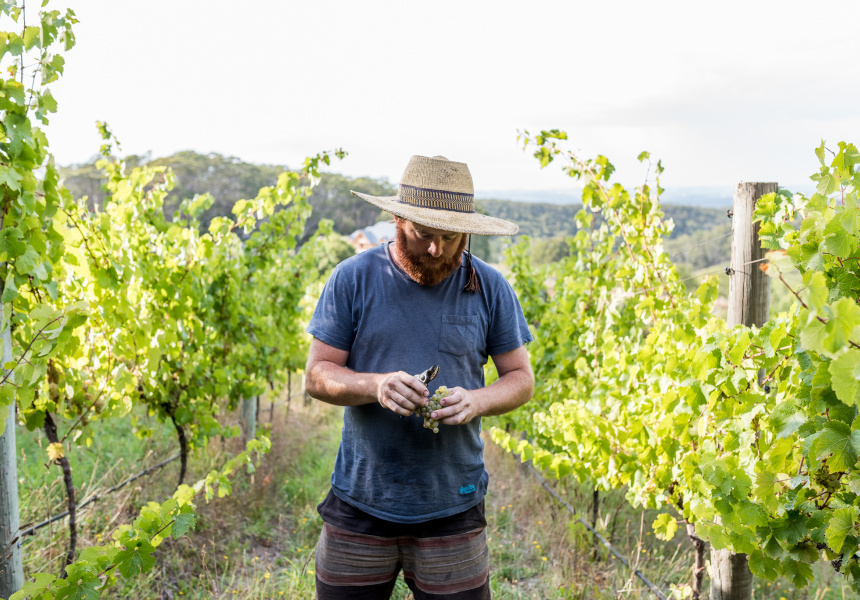 There is a small valley – a basket – in the Adelaide Hills filled with small parcels of fertile land and some of the most progressive wine minds in the country. This Saturday they’re getting together to toast the end of the 2017 harvest, and you’re invited.

The Festival at Basket Range is an extension of the casual monthly (or thereabouts) catch-ups between winemakers from across the region. Gareth Belton, who runs Gentle Folk Wines, says these gatherings (and the hangovers that inevitably follow) are just one of the area’s nice little idiosyncrasies. “We rock up, sit around a big table, laugh and talk shit, and try to get things done. But we get sidetracked pretty easily,” he says.

Manon winery’s Monique Milton (whose farm is technically in Forest Range – the ridge that overlooks Basket Range) echoes this community ethos. “We all run our own individual ships, but whenever there's a question or an idea or someone’s stuck with something … you can ring anyone for amazing support and guidance."

Much like the area’s wine, the festival grew organically from ideas shared among the hive mind. It was conceived to cap off the busy harvest season and generate a bit of chatter about what everyone had been up to.

“When the idea of the festival came up it was a no-brainer for Sophie and Sarah to organise it,” explains Belton. He’s singling out Sophie Button (who operates Commune of Buttons with her brother, Jasper) and event guru Sarah Carlson (who previously coordinated The Picnic at Marble Hill). Carlson says the day is about “groundbreaking artisan wines, delicious food and great music all served on top of a hill where you can really breathe”.

Button and Carlson are in charge of wrangling more than a dozen winemakers spanning the old guard and the new (including Jauma, BK Wines, Lucy Margaux, Ngeringa, Charlotte Dalton Wines, Ochota Barrels, The Other Right and Basket Range Wine).

While there will be a focus on natural and skin-contact wines – those for which the region is most renowned – there will also be some debut drops and more familiar, top-end plonk (what Belton calls his “semi-serious, semi-expensive stuff”).

“Everyone is an artist, but everyone paints their own picture,” says Milton. “We all have our own spin and our own beliefs in winemaking … I think that's what keeps all of us very enthused – everyone's wines are so different.”

Chef Tim Bourke (South West Supper Club) has partnered with nearby Tansley Farm and will serve dishes that feature its sustainably produced lamb. The Summertown Aristologist will also cook dishes in line with its “humble food” ethos.

Basket Range is a 25-minute drive from Adelaide. For Milton, “it’s the most remote, magical little spot in the Adelaide Hills. It's this beautiful basket of goodness.”