The Greenock site had also been a family home, a carpenter’s shop, an undertaker’s and a petrol station – then it was abandoned for half a century. Now it’s been transformed into a rustic regional eatery with an on-site coffee roaster and providore. 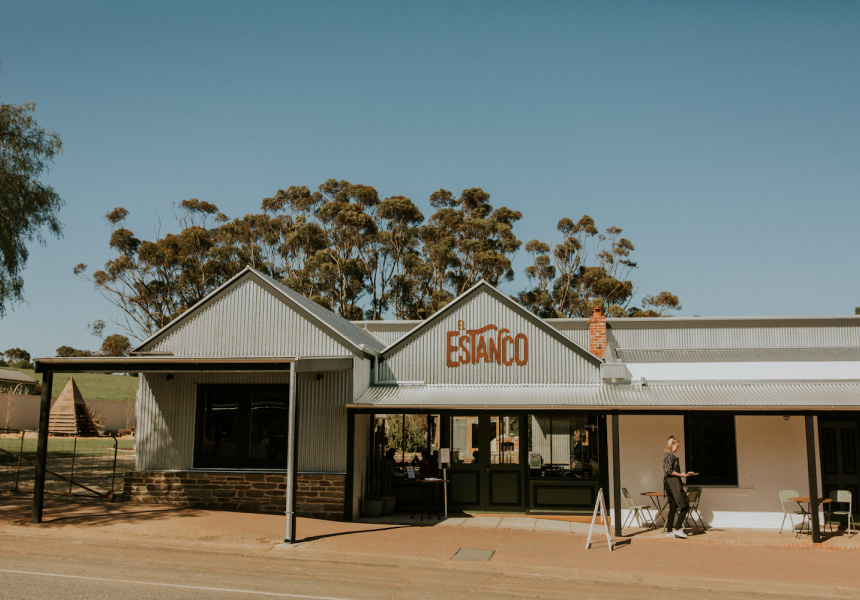 Abby Osborne isn’t quite sure how to describe El Estanco. “We're not a breakfast place or a bar or a Colombian restaurant,” she says, but there are elements of all three. There’s also an on-site coffee roaster, a small produce store and a large pizza oven.

Though it defies categorisation, the Greenock eatery (which Osborne runs with her partner, Julian Velasquez) has developed a loyal following since opening in 2016. The original venue, in a converted family home on the Barossa’s far west, was full of character but presented some significant challenges.

“I loved it,” Osborne laughs fondly, “but we’ve actually got stuff that works now!” In place of the cramped kitchen with a single four-burner stove, the new venue (which is literally across the road) has a spacious commercial kitchen with room for a dishwasher, plenty of prep space and a custom-made Argentinian-style grill.

Velasquez is keen to point out that the last addition has many functions. “We don’t want to be a steakhouse,” he says pointedly. “We use it for more delicate things – we put seafood on there, toast, we smoke things.”

Though he and second chef Verónica Tobón Arango are both Colombian, their pan-American cuisine incorporates Mexican, Argentinian, Peruvian and Spanish influences.

Gone is the all-day menu, replaced with distinct breakfast and lunch options including molletes (toasted flatbread), empanadas and bistec a caballo (flank steak on rice with onion and tomato salsa, a fried egg and smoky sofrito).

And the legendary chilaquiles are still perking up hungover diners on a regular basis. The plump kernels of hominy, sausage and tortillas, softened in a rich ancho chilli salsa and buried under a mountain of fluffy eggs, avocado and crumbled queso fresco, are the ultimate breakfast comfort food.

Behind the bar, a bottle of Diplomático and cocktails like the Pisco Sour and Paloma nod to the cuisine, while local wines share space with options like the “smashable” house white, a blend of greco, sav blanc and chardonnay from Ricca Terra in the Riverland. “You’re not going to find a big Barossa shiraz here, it’s not the style of food that we cook ... it’s something fun and different,” Osborne explains. Besides, “If people want Barossa wine they can go across the road”; there are four cellar doors within a couple of minutes’ walk.

One of the biggest differences in the new El Estanco is the amount of natural light. An interior dining room with a chesterfield and several vintage armchairs preserves the cosy feeling of the former venue. But windows surrounding the kitchen and dining areas make the rest of the space noticeably brighter and more open.

Getting it that way took more than nine months of hard work, due to the property’s dilapidated state. “As in, you’d hit a post and it would fall over,” Osborne says. Like El Estanco, the building had served many purposes. By turns a family home, carpenter’s shop, an undertaker’s, a general store and a petrol station, it had been abandoned for half a century when the couple stepped inside.

Fortunately, there was plenty worth keeping; as they peeled back layers they discovered the original walls of red brick and local bluestone, old fireplaces and some pressed-tin ceilings. The couple even unearthed an old coffin, which Velasquez suggests might make an appearance for a Dia de los Muertos celebration. Now the original features have been joined by high ceilings, polished concrete floors and comfortable banquettes set against the walls.

With room to spare, Osborne and Velasquez invited some friends to share the space. On-site coffee roaster Charlie Black provides single origin and a house blend, plus bottles of cold drip to take away. Diners can also head home with ciabatta or loaves of sourdough, as well provisions and crafts from the tiendita, a small store near the entrance, which sells ceramics with a gorgeous dark green “El Estanco” glaze from Really Useful Pots, plus tea and even salted caramel.

“El Estanco means ‘the corner store’,” Abby explains. “It’s a meeting place where you can buy and trade, have a coffee or a beer and meet your mates.”