The Central Market favourite has moved to a larger site and added a deli and cafe. Expect reimagined Middle Eastern breakfast classics, organic coffee and house-made pickles and hot sauces to takeaway. 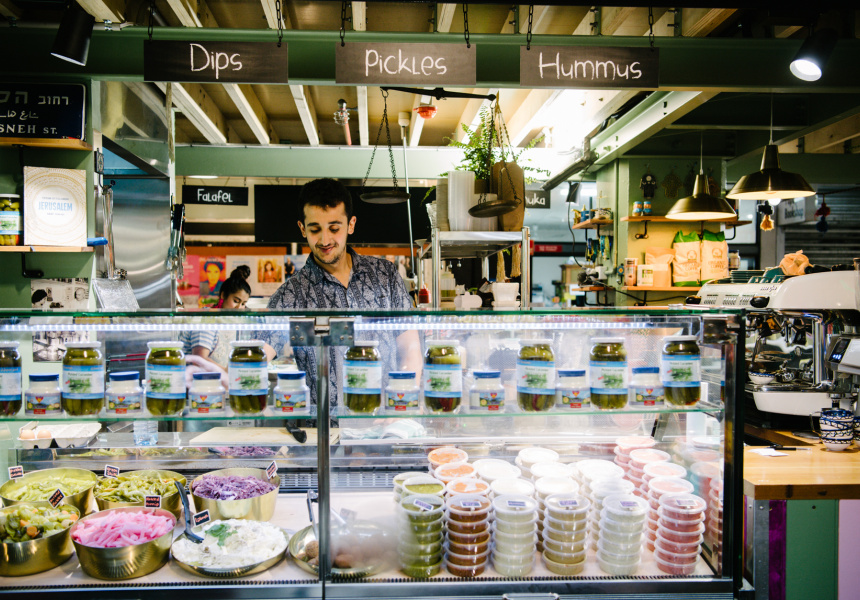 He’s visited countless markets in the Middle East and Southeast Asia, but Mitch Aldawsari’s eyes light up the most when he’s asked about Adelaide Central Market. “Every human being that lives in Adelaide must visit it,” he says. “Markets are where we start learning about different cultures and where food comes from. The business owners are very helpful … this market is a good place to be in.”

Aldawsari has become known for producing some of the city’s best falafel at his market stall, Real Falafel, which also has a presence at Plant 4 Bowden and events such as Womadelaide. Last week he closed shop on the old stall and moved to a larger site in the market (replacing Piroshki Café). The expanded Real Falafel stall comes with a cafe and deli attached.

The existing menu – Aldawsari’s renowned falafel in pita pockets and bowls with fried potato, hummus, pickled cabbage, tomato, cucumber and tahini; and sabich (pita filled with eggs, eggplant, salad, tahini and amba – a pickled-mango sauce) – is still available. New to the expanded shop are Middle Eastern breakfast classics such as shakshuka (two types – classic and “messy”, which is a scrambled-egg version); and an “Arabian smoothie bowl” with tahini, dates and cinnamon. “All the ingredients are absolutely wonderful,” Aldawsari says with a grin.

The menu is entirely vegetarian, with plenty of vegan options. They’re also serving organic coffee, and a liquor licence is on its way (Aldawsari says he plans to sell drinks from Sparkke).

The new deli is stocked with Middle Eastern hot sauces and other imported condiments, as well as products used in the menu – such as falafel; dips like hummus, tahini and baba ganoush; plus house-made pickles.

This latest iteration of Real Falafel was a four-year dream in the making for Aldawsari, who moved to Australia from Saudi Arabia in 2015. “I set up a goal that I had to have my own business by 2020, and I did it by 2018,” says Aldawsari. “When I first came [to Adelaide] I couldn’t speak English, so I studied English. Then I started working as a dishy, then a glassy in a nightclub, then for a chicken factory, and a restaurant … I know it’s not fair [how much I worked], but if you’re passionate, you have to do it.”

The new store's bright, colourful fit-out took about six weeks. Much of what you’ll see – like the decorative cushions in the dining area – is from the Middle East (specifically Egypt, Jordan and the United Arab Emirates). The interior wall features an artwork by Adelaide artist Azzurro Batic.