With a bigger dining room and former Hentley Farm chef on board, the Prospect Road pizzeria has introduced a new, freewheeling Italian menu not bound by tradition. “I like contemporary Australian food, because there’s no boundaries,” says Wilson (who previously worked at Hentley Farm, Bistro Dom and Orana). “We’re such a multicultural country. We can take influence from other countries’ cuisines, and that’s okay.”

Wilson’s reimagined vitello tonnato is a veal tartare with bonito mayonnaise and bonito flakes, served with potato fritters. (It's reminiscent of Nido’s rootello bonnato, which also used bonito mayo). And it's one of a range of menu items arriving in conjunction with a newly expanded dining area.

The Studio Gram update, which seamlessly adopts the existing look of the restaurant, almost doubles Anchovy Bandit’s capacity; in a Covid-less world, the restaurant has gone from seating 55 to 104.

A new pasta extruder sits pride of place on a bench overlooking the kitchen. “We were dead-set on doing pasta. That was one of the big things for the expansion,” co-owner Alex Bennett tells Broadsheet during our visit. “His [Wilson’s] pasta bench was always going to be a big part of the space. Bringing the kitchen into the space was also a big focus for the ambience.”

New pasta options include spaghetti with XO pipis, green garlic and tomato; pappardelle with lamb ragu and parmigiano; fusilli with pesto, broad bean and stracciatella; and tortellini stuffed with ’nduja in a chicken broth.

Coffin Bay oysters with chilli and blood orange vinegar; king prawns with fermented chilli butter; and asparagus with macadamias, capers and bottarga round out the new menu. Pizzas, of course, are still available.

A new focus on alcohol-free options such as mocktails, kombucha and fresh juices will add to the already-extensive drinks list. “We’re fermenting lots of stuff, and we’ve got all these extra juices and things that the bar can use for cocktails … there’s all these little syrups floating around, which is cool,” says Wilson.

Freshly made pastas, sauces and pickles to take away will be sold at Bottega Bandito next door, a new neighbourhood deli from the same team, scheduled to open this month. The six-turned-three-day “circuit breaker” delayed the build.

“Having to close for three days made [our builders] have to cram more work in,” says Bennett. “A few things, because of that closure, probably won’t line up on our timeline. But we’re really hoping for December.” The deli will offer twists on brunch classics (think an Italian eggs Benedict), house-made pastries and Dawn Patrol Coffee. 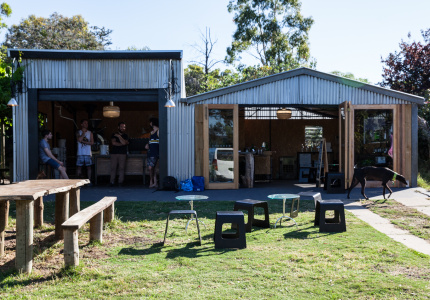