Including a parmi with Japanese and German accents, and a buttermilk fried chicken burger made with a recipe borrowed from His Majesty. 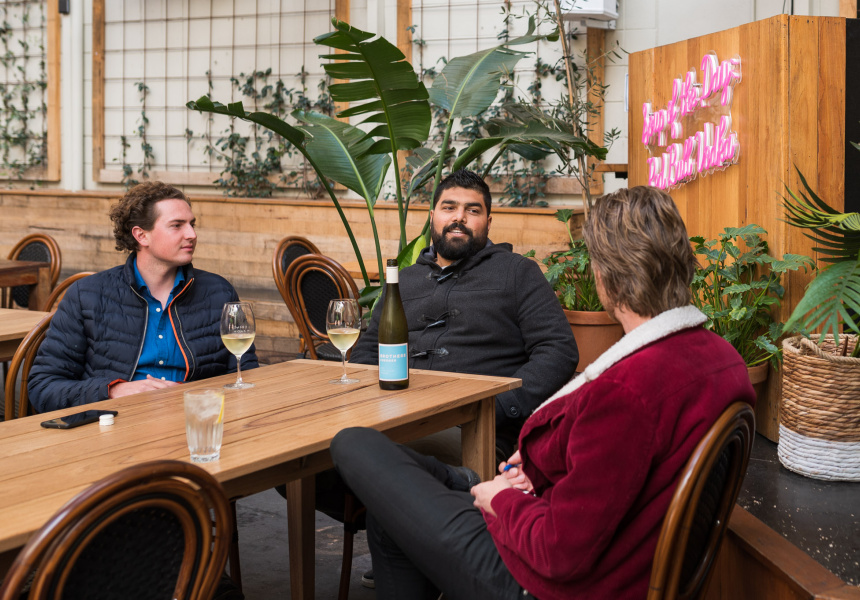 Before landing a gig at Hindley Street’s West Oak Hotel, chef Krish Dutt had never eaten a parmi. But when you consider his previous post was chef de cuisine for the royal family of Jordan, it’s perhaps forgivable that pub grub isn’t his go-to.

It was West Oak co-owner Hugo Pedler who introduced him to the classic pub parmi, putting it at the top of the list of “must keep” dishes when Dutt joined the team. He was up for the challenge.

“I’ve probably gone to 20 different pubs to try their parmies and see how they taste,” Dutt tells Broadsheet. He discovered around 80 per cent of venues, according to his calculations, were using pre-made schnitzels – just frying them up and whacking them out. So he created a version to call his own.

“I use a lot of Asian influences in my cooking,” says Dutt. “I went to a katsu – which is Japanese fried pork with lots of panko crumbs, so it’s really crispy.” With that as a base, Dutt thought back to his time in Germany. “They usually do their schnitzels in clarified butter on the grill, to give more smokiness. So our panko crumbs are toasted in clarified butter to get a little more flavour,” he says. Each chicken breast is marinated in sriracha sauce, mustard, black pepper and other seasoning. After 24 hours, “we egg wash and crumb it, and then it sits back in the fridge for at least a day”, Dutt says. And the secret ingredient for that extra crunch? Doritos.

Right now, the kitchen is prepping between 60 and 80 kilograms of chicken every two days. “Yes, our labour costs went up a bit, but we wanted to do it right,” says Pedler.

Dutt’s revamped menu still reads as traditional hotel fare, but, as with his parmi recipe, it’s informed by his travels around the world. He’s also putting up a buttermilk crispy chicken burger with a recipe borrowed from the King of Jordan. “I haven’t changed a thing in there. I’m using exactly what he uses,” he says.

So how did he come to be swapping recipes with King Abdullah II?

After running the kitchen at Madam Hanoi for its first three years, Dutt moved to Jordan to cook for the royals, at the invitation of an old friend. “He thought he was sending me a private [Facebook] message, but he posted on my page saying, ‘Hey Krish, His Majesty would like to try your food. I have a job opportunity for you.’ A lot of people saw that.” He couldn’t turn it down.

He relocated to the palace compound, where “everything was done in house, [even] making our own cheeses”, says Dutt. “We had our own dairy farm. We had our own vegetable farm and our own beef.”

During his time as chef de cuisine, he travelled to 22 countries – including most of Asia – and worked with chefs at Michelin-starred restaurants all over the world.

When his tenure finished, he came back to South Australia – just in time to go into lockdown. “I was so bored,” he says. “I ended up contacting one of my friends and asking if they knew of any gigs.” They introduced Dutt to Pedler – who had an opening for a chef at the newly renovated Joe’s Kiosk.

“We all worked really well as a team, so I said, ‘I’ve got this pub in the city. Do you want to come and do some consulting work?’” Pedler says.

At that stage Joe’s was only open on weekends, so Dutt had time to spare. Now he’s putting in at least 40 hours a week across both venues. “Every day I’m on the pans … It’s great.”

“We’ve also put a lot of vegetarian and vegan options on the menu,” Dutt says. He resisted adding an eggplant parmigiana, opting instead for a soy and barley-based meat alternative which he tops with cashew and coconut cheese. “After eating 20 other pub parmies I found out a lot of them do eggplant and cauliflower, so I wanted to be a bit different,” he says.

“We’re not a crazy gastro pub – but what we are doing is bringing that fine-dining focus into a pub atmosphere, and it’s working really, really well,” Pedler says.

“We’re not so much a student pub. We’re more of a faculty and medical staff venue, so that need for high quality food is definitely there – especially over lunch times. We hadn’t executed it as well as we’d hoped to, until Krish came on board.”