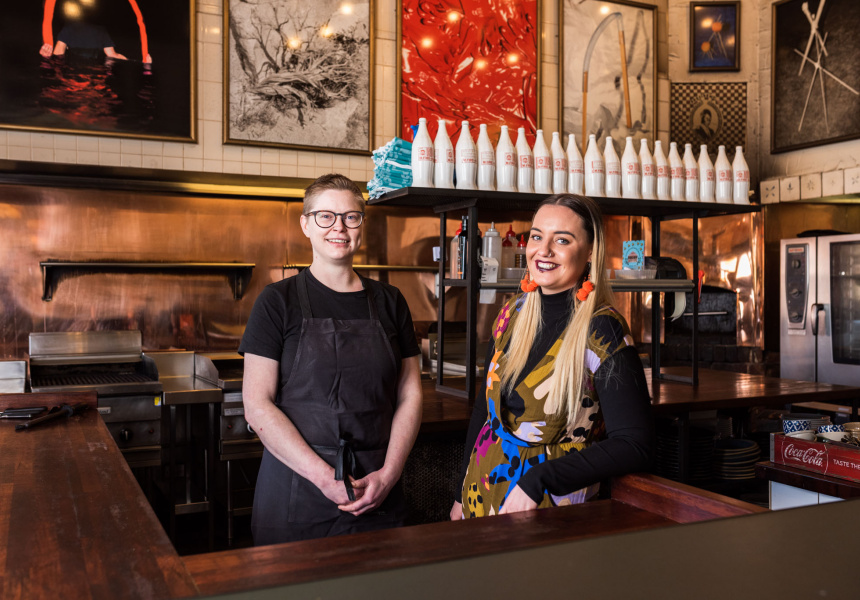 For one night in November, Duncan Welgemoed’s Africola will transform into a Middle Eastern dream.

That’s the aim of chef Lauren Southwell and colleague Jenna Eerden, who will take over the running of the front-of-house from Nikki Friedli.

“Middle Eastern is a cuisine I’ve always been interested in,” says Southwell, who moved to Adelaide three years ago from Melbourne, where she worked at Cumulus Inc in the CBD and Rumi in Brunswick, a much-loved fixture of Melbourne’s dining scene since opening in 2006.

It was Joseph Abboud’s brand of vibrant Middle Eastern cuisine at Rumi that gave Southwell the idea for her Broadsheet Kitchen concept. “The way he approached the simplicity of Middle Eastern food in a refined way definitely inspired me,” she says.

While the menu for the Broadsheet Kitchen takeover is still a work in progress, Southwell and Eerden have been bouncing around several delicious-sounding ideas. The dinner will follow a three-part format. “We want to do snacky bits at the start, like pickles and nuts,” says Southwell. “We don’t want to give too much away but we have a fun dessert planned – we’re going to use liquorice.”

Following Middle Eastern tradition, it will be a feast to enjoy with friends. “The whole idea of sharing and using your hands – that’s the way I like to eat,” says Southwell. Plenty of bread will be on hand to mop up leftovers from the plates. “Cutlery is not essential for this dinner.”

Eerden, who moved to Adelaide from Auckland six years ago, says the service will be formal-slash-casual. With a background in wine marketing, she’s looking forward to the opportunity the takeover presents to get to know local producers. “We’re pretty spoilt in Adelaide in terms of wine,” she says. “There are so many fun, vibrant, really unique natural wines coming out.”

Of course, Adelaide is famous for more than its wine. “We have such an amazing selection of produce in the Hills and around Adelaide,” says Southwell. “With any kind of Middle Eastern food, the ingredients need to be the main event. You don’t want to mess around too much with crazy techniques because that’s not what the food’s about.”

Eerden and Southwell are relishing the challenge to flex their respective skill sets and the chance to collaborate on a concept from start to finish. “For me, it will be about having a really solid plan and testing everything beforehand,” says Southwell. “I know that I can’t jump into something and wing it.”

Welgemoed and Friedli have remained hands-off during the planning process, entrusting Southwell and Eerden with total creative control. “We consult with Nikki and Duncan, but they’ve basically left it to us to do whatever we want,” says Southwell. Welgemoed is “there if we need him, but he hasn’t asserted any of his own ideas. I think he’s more interested to see what we’ll come up with without his help.”

Welgemoed is a formidable presence in the kitchen and a great teacher, says Southwell. “I love his big personality. He really lifts the mood of the kitchen … but he’s still a taskmaster.”

Eerden is equally effusive about working at Africola under Friedli. “I’m constantly being challenged,” she says. “No one day is the same. Nikki is amazing. She’s been in the industry for so long; there’s so much I can learn from her.”

Seating at the feast will be communal and outside, at the bar, or standard inside tables. Get in quick - doors will open at 6pm to be seated at 6:30pm and there is only one sitting with 75 seats up for grabs. Book a spot now either online, by email on info@africola.com.au or phone on 8223 3885.

Broadsheet Kitchen’s Middle Eastern Takeover at Africola is on Monday 25 November at 4 East Terrace, Adelaide. Tickets are $65pp for food only – drinks available on consumption. All dietaries must be given at the time of the booking as venue cannot guarantee it can accommodate on the night.