Adelaide’s Dessert King is Taking it to the Streets

Devour’s Quang Nguyen is bringing back the ice-cream truck. 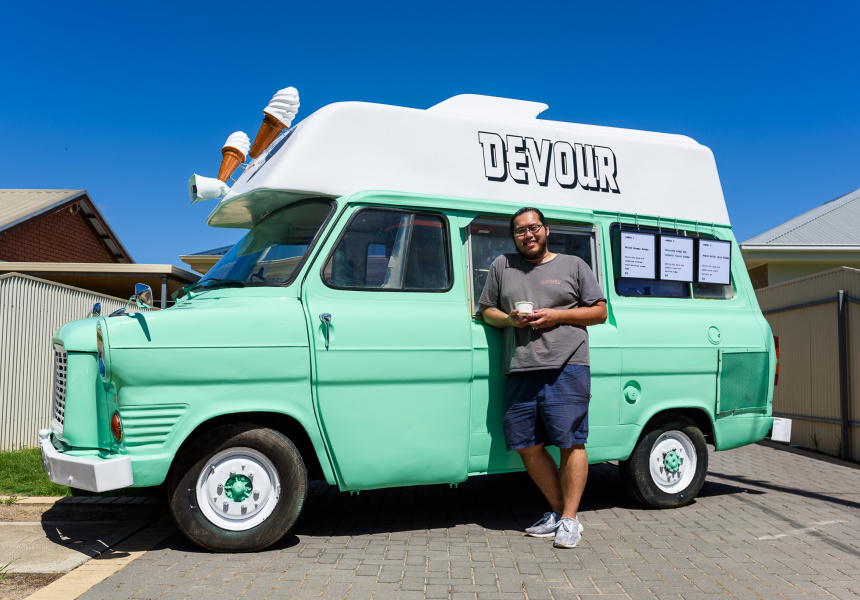 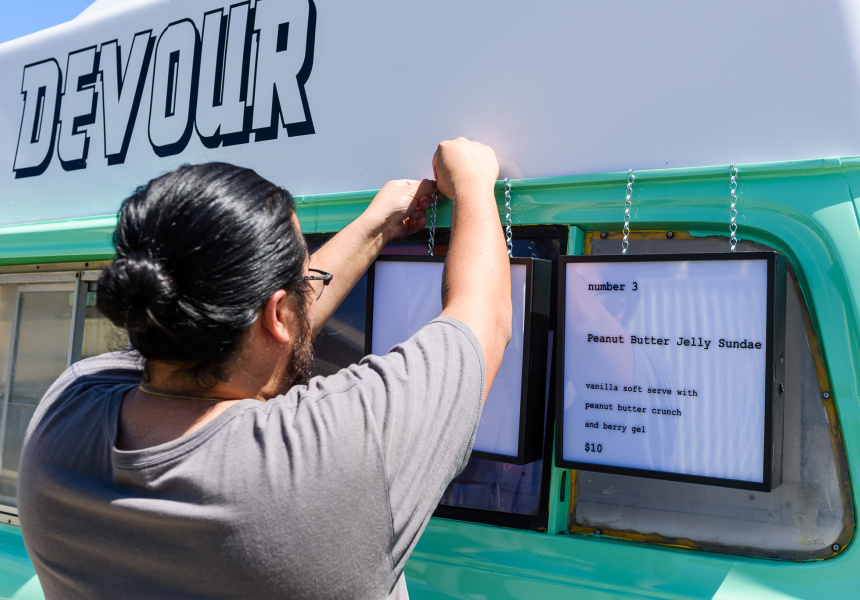 It took Quang Nguyen (Devour, Third Time Lucky) eight long years of searching before he was reunited with his lost love. But there she was; 30 years old and still as stunning as ever. She’d done plenty of travelling and looked a little world-weary, which only added to the seduction. Plus, her original soft-serve machine was still in perfect working order.

Owning a vintage ice-cream van had always been a dream for the dessert-obsessed chef, but the perfect rig had proved illusive – or perhaps he’d already let it slip through his fingers.

After passing on the yellow-and-white 1987 Ford Transit when the two first met all those years ago, Nguyen says he “looked at a lot of rust buckets”. “I can’t believe I didn’t buy it the first time around. But then my brother managed to track it down. It was still in use – and with the same owner.”

Audrey – as she’s been named – has always served as an ice-cream van and came with all-original gear. “We’ve added a second, bigger soft-serve machine and she’s [had] a paintjob,” says Nguyen. He’ll keep adding to the fit-out – benchtops, a deep fryer, fridges – as his concept around Devour's dessert van develops.

The long-term goal is to create a mini pastry kitchen serving ice-cream and hot desserts at festivals, small events and weddings.

The pair’s first outing was Here’s to Now. “We just ran with a couple of ideas,” says Nguyen. “A sundae with salted-caramel fudge and caramelised cornflakes, and a choc-top in a doughnut cone.”

Those who missed out on these don’t have long to wait for another chance. Nguyen’s next gig is The Royal Croquet Club, which opens this week. He’s promised four all-new menu items, including a peanut butter jelly sundae and a chocolate fudge and confetti sundae.

“Making soft serve is very different from regular ice-cream,” says Nguyen. “The recipes vary a lot depending on flavours.” He’s enjoying experimenting with ideas and – as anyone who’s attended a Devour Dessert Night will tell you – has some pretty wild ideas up his sleeve.

“It's something that’s going to be heaps of fun for us. It’s all about creativity and playfulness.”