Eating “out” looks very different right now. As many of us turn to takeaway, restaurants are adapting by introducing their own delivery platforms to keep staff employed and avoid the big players’ high fees. Now more than ever, it’s important to support local businesses. Restaurants, pubs, bars and cafes across the state have closed in droves – some temporarily, others permanently. The rest have pivoted to takeaway (and delivery) to try to survive.

Some businesses have signed up with the big players in the food-delivery game, but those platforms charge venues up to 35 per cent in fees, encroaching on already-thin margins. (An online petition is currently calling on food-delivery platforms to drop or reduce their commission charges.)

To combat this, some local operators have launched their own delivery services to keep the money in the till.

“It’s a combination of our favourite dishes, as well as dishes from our restaurants. Everyone’s got a bit of a different take on it,” Baker told Broadsheet last week. “Terry’s curries are elite, so he’s doing a lot of favourites from his restaurant. I’m doing a lot of things that I love to eat at home. I’m doing a gorgeous little tagine … it’s more comfort-food type stuff.”

The Zahras want to ensure that local hospitality staff remain employed throughout the Covid-19 crisis as delivery drivers and riders, rather than outsourcing the work to third-party platforms.

“In light of the significant downturn in our industry, we have been forced to think outside the box,” Che said in a press release. “After being approached by [My Kingdom for a Horse owner] Emily Raven … we came up with the idea to use her waiting staff as delivery drivers, which helps keep staff employed whilst having food and beverages delivered to customers with the option of zero contact.

“Restaurant Runner is now offering this model for all interested food businesses to help retain staff and keep people supporting local business.” My Kingdom For a Horse has since closed temporarily.

Star sommelier Liinaa Berry has launched a drinks service called Wine Convive that delivers a curated sixpack of wines to your door. Berry will also share video content – available to members only – of her and other wine-minds talking about the drinks.

“A convive is a drinking or eating companion, which we all need,” Berry said in an Instagram post. “We aren’t meant to be lonely creatures. Throughout these times, we all miss our encounters with bartenders, chefs and sommeliers. These interactions [were] a fundamental part of why I adored my guests and enjoyed finding the right wines for them ... I can still do that now if you want to have me or other somms as your online convive. This is not just me, this is a collective.”

Wine Convive will be repping wines by Aussie producers such as Charlotte Dalton, La Petite Mort, CRFT, Brash Higgins and Wines by KT, as well as some international winemakers.

His new project, Big Easy Drinks, offers same-day delivery of local beer, wine and spirits within metro Adelaide for orders placed before 2pm. The drinks are curated by Brown and the bartenders from his respective venues, who’ll deliver them to your door.

“If we can employ even two people that’s a win for us, after having to say goodbye to so many,” says Brown. “We’re not just going to sit down and take it. We’re going to keep kicking and screaming, and do our best to keep our staff employed.”

Brown intends for Big Easy Drinks to go national. “It was really important for us to continue working with our suppliers. In times like these, it’s more important to support local than ever… So we’ll hopefully be providing some local producers access to a broader market,” he says. “People like Never Never, we’re quite close to, so being able to send their stuff nationally is amazing.”

“Now’s the time for everyone to think local,” he adds. “And think about the businesses they really want to support.” 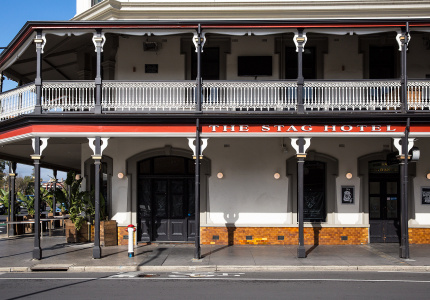