Adelaide Dishes We Can’t Live Without

From seven of our city’s most-loved institutions come seven signature dishes that have stood the test of time. 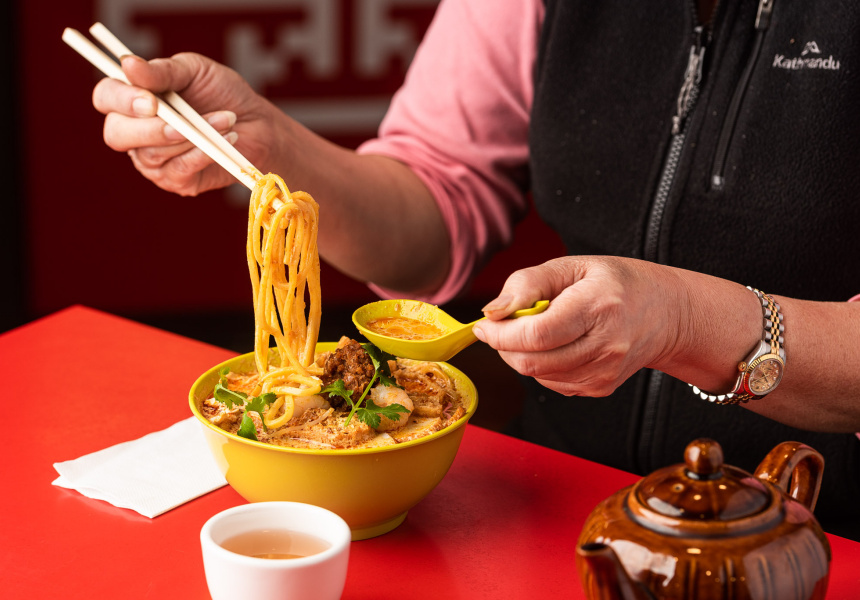 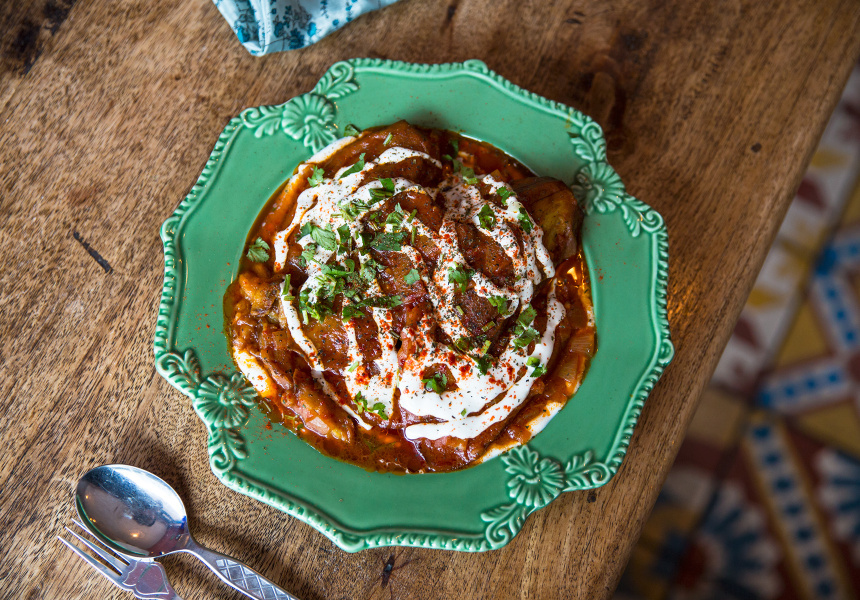 A lot of what we see in restaurants today is trend-driven – fancy crustless sandwiches, ferments and made-for-Instagram desserts. And while trends undoubtedly drive innovation, which puts Adelaide’s restaurants onto the national stage, there’s always a case for the classics – the simple, the traditional and the flavour-over-form.

Sometimes all it takes for a restaurant to imbed itself in our city’s DNA is one dish. We spoke to institutions across Adelaide about those dishes – the ones that have been on the menu for so long it’s almost impossible for operators to remove them for fear of revolt – to find out where they’re from, how they’re made and why they’ve earned a spot on the city’s culinary mantelpiece.

At Parwana, the Ayubi family’s history is on every plate. The recipes hold a small piece of a country left behind more than 30 years ago when the family fled Afghanistan at the height of the Soviet-Afghan War.

Few dishes have been adopted more fiercely by this city than the signature eggplant, banjaan borani. “My family have had it for as long as I can remember,” says Durkhanai Ayubi. “It’s not something we came up with to try and wow people.”

The shiny, purple-skinned orb, forever immortalised as the most phallic of emojis, gets the respect it deserves here. Slices of it are simmered in a spiced fresh tomato sauce until the inside flesh pulls apart effortlessly. Then it gets a fresh hit with a drizzle of garlic yoghurt, and a sprinkling of mint and paprika.

It’s been on the menu, unaltered, since Parwana opened on Henley Beach Road in 2009. Ayubi can’t quite quantify the restaurant’s eggplant intake. “But this stat’s a good one!” she says, chuffed. Parwana is at Womadelaide every year. “We usually go through about 500 kilograms – half a tonne – of eggplant that long weekend.”

Diehards know to book ahead. Forgetting, or holding out the naïve hope of snagging a walk-in table, is a soul-crushing mistake made by many. Not least a New York Times critic on a Tuesday night last year.

Of the few Chinese restaurants on Gouger Street in the early ’90s, even fewer had dishes beyond the rudimentary for vegetarians. “Back then if you went to Western Chinese-style restaurants they only had something like mixed vegetables,” says Brian Shair, who moved to Adelaide from Hong Kong in 1991 and opened Ying Chow in 1994.

His answer: broad beans with bean curd and Chinese chutney. Or, as it’s better known, BBC.

Shair picked up the recipe from chefs in Shanghai-style restaurants in Hong Kong. “We stir-fry chilli and pickled cabbage [Chinese chutney] together with garlic, then we add the beans and bean curd,” he says. Somewhere in the realm of 300 serves of the glossy-green-bean dish are ordered every week.

“We never saw this dish before in Adelaide while we were creating it, but now so many restaurants do the same thing,” Shair says. One such restaurant, East Taste, is perhaps Ying Chow’s fiercest rival in the Adelaide’s-best-BBC stakes. For this very important investigation I conducted an Instagram poll in which Ying Chow received 61 per cent of votes to East Taste’s 39 per cent. #democracy.

But if one thing’s for sure: $10-a-bottle corkage means a meal at Ying Chow can get out of hand. Over-ordering often ensues. To see one table with multiple serves of BBC isn’t unusual – it goes quickly. As do the shallot pancakes and tea-smoked duck, both of which could have made this list on their own merit.

When Lucia Rosella opened her namesake restaurant in the Central Market in 1957, first on the menu were spaghetti bolognese and pizza with olives and anchovies.

“The only spaghetti [Australian] people knew in those days was in cans,” says her daughter, Nicci Bugeja, who now runs Lucia’s (and its next-door deli) with her sister, Maria Rosella.

Their mother, who died in 2002, left a blazing legacy. More than 60 years since opening, the restaurant is as jam-packed as ever.

Spaghetti bolognese is no longer groundbreaking, but it still reigns supreme here. Though the spaghetti vongole (with Goolwa pippis) and Friday-only beef lasagne aren’t far behind. “We probably go through 40 to 50 litres [of bolognese] on a Friday – our longest day,” Bugeja says.

She says those who grew up eating it, herself included, recognise no change in flavour. But it’s not just nostalgia. Like most dishes on the menu, “We still do it the way mum did it,” says Bugeja. “The butcher we get our beef mince from is Crittenden Meat Store in Findon, she always used them.”

Unlike most recipes for the meaty sauce, Lucia’s doesn’t use vegetables – “no onions, carrot [or] celery,” says Bugeja. “The secret is in browning the mince.” To that, homemade passata and a little bit of chopped tomato are added. Then it’s finished with basil and garlic.

Where else in Adelaide do activewear-clad gym-goers getting a protein hit sit so comfortably, and regularly, alongside six-figure-earning suits chowing down in-between court hearings or board meetings?

In almost 30 years on Moonta Street, “We haven’t changed a lot, and the menu has pretty much stayed the same,” says manager Brian Soong.

Order the signature dish, originating from the Chinese province of Hainan. There are some choices to be made: steamed chicken breast (skin off) or thigh (skin on), clear chicken or laksa broth, steamed Asian greens or none. And then there’s the rice. “We cook [it] with chicken stock from chicken we’ve cooked, instead of water, and add some ginger,” Soong says.

But if there’s anything more impressive than the chicken rice, it’s the speed at which it’s made. Spend too long spooning out sauces at the condiment station and your meal might beat you to the table.

This isn’t somewhere to linger for a post-meal chitchat. Both cuts of chicken are deboned for your convenience, and that of those waiting for your table.

Here, banquets are legendary. You’re knocking elbows with friends in a red fibreglass booth, hunched over a table littered with tinnies and wine bottles (corkage is free on banquets that are $22 or more), and waiting darty-eyed for the restaurant’s magnum opus – the falafel.

Jerusalem’s are some of the best in Adelaide. And owner Michael Mehri takes them very seriously. The menu reads “falafel (vegetable patties)”, and that’s about as much of the recipe as he’ll divulge. “I can’t tell you what’s in them – that’s a family secret,” he says, sternly.

The closely guarded recipe has been in Mehri’s family for generations, and he respects that. “Traditions must be traditional,” he insists. “A lot of people are trying to get on the bandwagon now, trying to add certain things to falafel – just destroying the culture.”

It was 1973 when Mehri’s father opened Jerusalem on Hindley Street. Middle Eastern and Lebanese food was a mystery to most Adelaidians. “It took a year just to expose people to falafel because they didn’t know what it was,” Mehri says. “It was a new dish, like most of our dishes, unless they lived in Melbourne or Sydney.”

Stodgy and super-dry equal falafel fail. These are not that. And though I hesitate to describe food as “moist”, that’s exactly what they are. Each is made fresh daily and cooked to order.

Husband and wife Charles Lo and Doreen Chiaw moved from Sarawak in Malaysia to Australia in 1988. The next year Lo and his siblings bought Asian Gourmet, which first opened in 1985. He and Chiaw took over in the early 2000s.

Regardless of who was at the helm, Central Market-goers have continued to wax lyrical about the Singapore laksa. Around 150 almost-overflowing bowls are slurped through daily, and more on Fridays – it’s the only day the special Sarawak laksa is available.

There’s an air of chaos when dining in. It’s usually chockas and the bright-red tables rarely sit flush on the floor. Consistency is reserved for the kitchen.

Making laksa paste from scratch is “quite a hard job”, Chiaw says. “We still use the same recipe as my husband’s [siblings] – we make the paste ourselves twice a week, and it takes a few hours to do it.”

Lo and Chiaw are as familiar to the market as the market is to them. Chiaw says they’ve forged decades-long relationships with some regular customers who have grown up in front of their eyes.

If you haven’t been to Fino you might be scratching your head at this inclusion. But everyone who has will tell you to get there, stat, and to save room for dessert.

Co-owner and executive chef David Swain lived in Barcelona for a few years before opening Fino Willunga with Sharon Romeo in 2006, and relocating to Seppeltsfield Winery in the Barossa Valley in 2014.

He learned a trick or two, such as how to make this kick-arse dessert, which is to Spain what the creme brulee is to France. “It’s the most simple thing – cream, eggs, sugar, orange and lemon peel, cinnamon, and a bay leaf. That’s it,” says Swain. “We infuse the cream, whisk up the eggs and sugar, and pour it together. Then we give it this amazing caramelised top.”

The result is a silky-smooth meal-ender that somehow isn’t overly rich or sweet, but hums with the infused citrus peel and cinnamon. It’s been on the menu since day one, and Swain predicts around 200 of these bad boys hit the pass on an average week.

Fino’s menu is anything but static. How then has something so simple stayed so steadfast for 13 years? “It keeps us honest,” Swain says. “You can open a restaurant and be dictated by a client base or the media. This is something we can always go back to. Like the really great European dishes, it stands the test of time.” 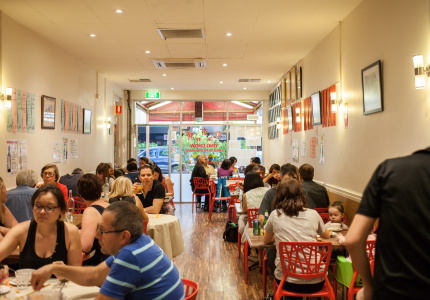