After peddling coffee and pastries from a pop-up caravan, A&K has opened a permanent venue at UniSA. 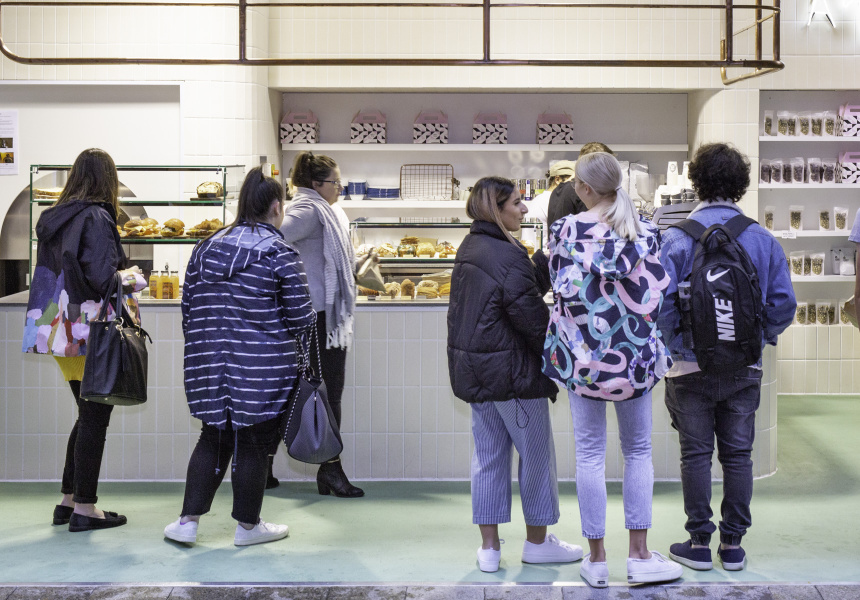 Abbots & Kinney has returned to the West End. It started as a tiny Friday-morning pop-up outside Leigh Street’s Coffee Branch some years ago, and now the bakery and coffee shop has new digs on the UniSA campus – between Hindley Street and North Terrace.

Trays of fresh pastries (all baked on-site) and D’Angelo coffee will perfume the courtyard from 7am Mondays to Fridays. There’s a pizza oven for turning out Roman-style dough wheels at lunch time, along with A&K’s famous savoury danishes, sandwiches, pies and more.

A&K is no stranger to the UniSA grounds. The A&K caravan has been a fixture on Fenn Place for the past 12 months, peddling a selection of pastries and coffee. “The University has been so great to work with,” says owner-baker Jonny Pisanelli. “They want good operators for students and they’ve made it so much easier for us [to set up].”

The new, permanent venue opened last week and already Pisanelli sees signs of it becoming a meeting place for students. “It’s about building a community,” he says.

The fit-out process was led by MPH Architects and Mossop, with design consultation from Studio-Gram. It’s a brighter, more youthful space than the Pirie Street flagship, with mint-green flooring and neon signage.

A university outlet may seem an odd choice for the business – whose Pirie Street store is crammed with suits and sensible heels most days – but Pisanelli is eager to engage with a new audience and grow his brand. “These [students] are the future of Adelaide,” he says. “It’s really good to be getting our products to them.

“If students are only exposed to [basic businesses] straight out of high school then, when they graduate and go out into the working world, this becomes the norm.”

Universities are under increasing pressure to improve on-campus culture, especially as online education becomes more appealing to those looking to balance life, work and study. Flinders University successfully revamped its dining hall – attracting the likes of Kutchi Deli Parwana, Pearl’s Pizza (from the team behind Burger Theory) and other street credible brands – as a means of marketing itself to school-leavers. Abbots & Kinney and Pearl’s Pizza already share a shipping container on the Adelaide Uni campus, and now UniSA is following suit.

By offering more boutique food vendors, universities are also encouraging graduates who respect craftsmanship across all industries. “In years to come, when their degrees are finished, they’ll be far more discerning about where they buy their coffee and where they buy their dinner … They’ll be more educated,” Pisanelli says. And isn’t that what university is about?