Abbots and Kinney Moves Into Croydon

The popular bakery arrives in the suburbs with its signature pastries, sourdough breads and – for the first time – gelato. 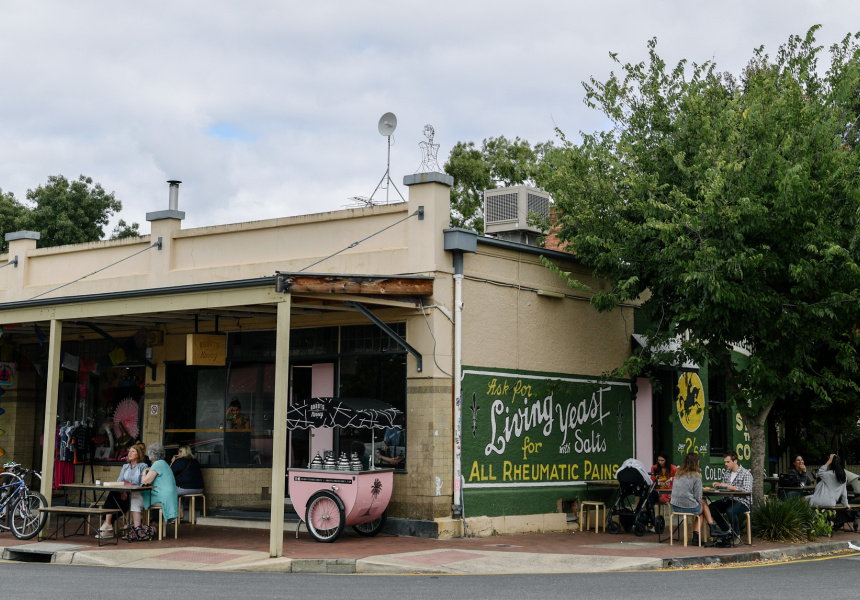 “I’ve always thought Abbots and Kinney was more of a suburban cafe; it was just situated in the CBD,” says Jonny Pisanelli. He’s just launched its fourth location – and first outside of the city – on Croydon’s Elizabeth Street in the former Red Door Bakery site next door to Billy’s Table.

“It’s a bittersweet situation,” Pisanelli says. But he’s spoken with Red Door’s Gareth Grierson about the changeover and has his blessing. Ironically, the two bakers were once (friendly) rivals for the location. “A month before Red Door actually opened – when I was [known as] From Scratch – we wanted to take that same site,” says Pisanelli. “Red Door took it and became what they became – which is great.”

Two weeks of heatwaves slowed progress, but doors finally opened at the end of January. Pisanelli tapped Crafty Design's Candice Papagiannis to freshen up the vibe. The once red door has received a lick of pastel pink paint and pink tiles now contrast an otherwise muted colour scheme of black paint, concrete and timber panelling. Capacity has increased, too.

Pisanelli’s signature pastries are turned out daily, along with pies, pasties and sausage rolls. There's also a focus on breads, with sourdoughs, ciabattas, baguettes and more served charcuterie style. “Customers can choose what bread they want … and we’ll slice the meat and assemble the sandwich in front of them,” he says.

When Broadsheet first caught up with Pisanelli, he was boarding a train from Rimini in northern Italy – where he’d been gleaning the secrets of making natural gelato – to Rome. He landed back in Adelaide just in time for the unveiling, eager to apply his new skills.

“We’ve got a gelato cart that will sit out the front,” he says, excitedly. Flavours will be blended daily at the bakery’s commercial kitchen, just five minutes away in Albert Park. Expect all-natural and vegan varieties – as well as custom flavours for events and weddings. Pisanelli says he’s “chomping at the bit to start churning”.

Another difference is the coffee. Abbots and Kinney’s CBD outlets have always used beans from Adelaide roasters D’Angelo Coffee, but at Croydon the house blend comes courtesy of interstaters White Horse Coffee. “I’ve always loved what they do over in Sydney,” says Pisanelli. “Dom [Majdandzic] has been a mentor of mine almost as long as [Tony] D’Angelo.”

The shop will trade between 7.30am and 3pm – for now. “It just depends on what people want from us,” Pisanelli says.

“The whole idea of coming to Europe was that we want to keep growing and evolving in what we do. We want to make sure that anything we add to our repertoire is on par with our pastries.”

This article was originally published on January 29. Menu items may have changed.