The Gilles Street shopfront for local labels Good Studios, BB Shoemaker and Emma Sadie Thomson is moving to Piccadilly next month, and adding a coffee stop and bakery to the mix. 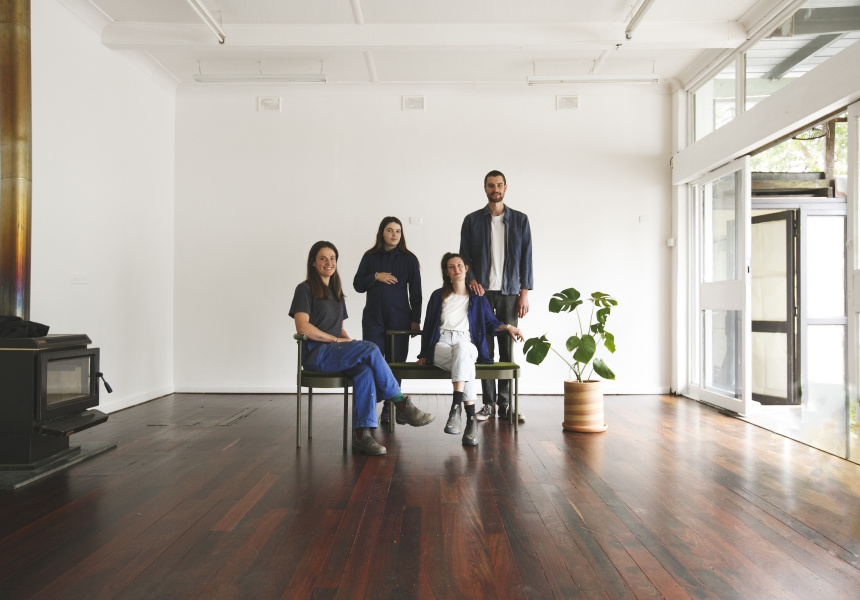 After almost four years on Gilles Street, Ensemble is moving on from its city digs to greener pastures. Owners Anny Duff of Good Studios, Beccy Bromilow of BB Shoemaker and plant stylist Emma Sadie Thomson have secured the keys to a new site – a former design studio in lush, leafy Piccadilly.

“For us it’s very bittersweet,” says Duff. “We’ve loved being in the city and in that space, and almost four years of growing from nothing to this little established hub … but after Covid we were forced to re-evaluate how sustainable our current model was long-term. And Hills prices are a lot more manageable than the CBD.”

Since opening in 2017, Ensemble has built a loyal following for its beautiful selection of locally made, sustainable clothing, shoes, accessories, jewellery, ceramics, plants and homewares. The collaborative retail space, studio and gallery has been a strong advocate for “slow” goods, and a champion of local designers and makers who share its values.

“During Covid we were forced to take stock and make a decision to either close the shop and just focus on keeping our respective businesses going … or put everything into growing Ensemble with a more sustainable model,” says Duff. “We all agreed this for us was far from over – and in fact the three of us coming together has meant we’ve enjoyed running our businesses so much more, because we’ve had that support from each other. And none of us wanted to lose that.”

Since closing Ensemble on October 17, Duff, Thomson and Bromilow have been busy readying the new shop for an early November opening. Duff is also busy preparing for the birth of her first child – and seemingly taking it all in her stride. “Better to move now when I’m 36 weeks rather than trying to do it when I’m 38 weeks and literally a hippopotamus,” she says with a laugh. “The girls have been amazing, they won’t let me up at the new space to paint or anything.”

The new site is a 20-minute drive from Ensemble’s previous digs, and much closer to home for Bromilow and Thomson, who are both based in the Hills (Duff has also purchased land in Norton Summit and will eventually also be based up there).

“We were dreaming that if the perfect Hills space came up we’d jump on it, and this just fell in our laps,” says Duff. “There’s so much scope to grow there. It felt pretty serendipitous.”

The new venue will mirror the city site with a retail space out the front and working studios out the back, which will double as an events space for art exhibitions, launches, pop-ups, workshops and more.

“It’s a maturing of sorts,” says Duff. “It’s pretty much the same model, we just have more space to work with. There’ll be a photography studio and potential artist residencies in the future. And there’s a couple of artist spaces across the road as well, so there’s already a little hub up there we’re hoping to build on.”

Many will be missing the one-two set-up of Ensemble and its neighbouring cafe Sibling (co-owned by Duff’s sister Caitlin Morse and her husband Nathaniel). They’ll be pleased to know the new site will have a coffee shop next door (formerly Piccadilly Kitchen), to be run by Bromilow’s partner Duncan Reid.

Reid previously worked as a barista at Sibling and a winemaker at Commune of Buttons. He’s also a noted baker, providing the inspiration behind the shop’s tongue-in-cheek name, Brid (“bread” pronounced in Reid’s native Kiwi tongue).

Naturally, the menu will revolve around bread. Expect sandwiches and toasties to eat in, plus loaves of sourdough and focaccia – made with organic and biodynamic flours – to take home. Reid also wants to introduce New Zealand’s real fruit ice-cream to Adelaide.

“In New Zealand you get it on the side of the road when you’re going on your summer holiday,” he recalls fondly. “It’s vanilla ice-cream and frozen fruit squished through a special machine … it comes out looking like pink soft serve. It’s real pretty.”

The shop will reflect Ensemble’s clean, modern aesthetic with big windows, lots of natural light, white walls and natural-wood finishes. “I want them to feel connected, not necessarily as one business, but working together aesthetically,” says Reid.

“One thing we’ve tried to build, having Sibling and Ensemble, is that it’s a destination,” adds Duff. “You can come and eat delicious food and have a browse. I think a trip to the Hills will emphasise that exact experience we always wanted to create.

“We were never able to rely on foot traffic, as the products we sell are at a price point that you have to invest in … you’re not gonna come in on your lunch break and splurge. I mean some people do, which is amazing. But we ultimately hope to encourage a conscious approach to buying.”

After the quick closure of the Gilles Street site, the team is gunning to open next month in time for festive-season shopping. “If people weren’t able to say goodbye, they’ll have more incentive to come and say hello again,” says Duff.

“We’re not gonna nap on it – we’ve got Christmas. As far as we’re concerned we’re not going anywhere, metaphorically. We’re just on the move to somewhere that means we can be around for a lot longer.”

Ensemble will open in early November, with Brid set to follow in December.