The mobile store will be dealing in rare vinyl this Record Store Day. They’re like the Pied Piper of vinyl – wherever Brooke Sullivan and Mark Cnotek go, record collectors follow. So this Record Store Day they’ll be going the extra mile.

The idea behind their mobile store is simple. Crackle & Pop Records takes vinyl to markets, cafes and wineries across South Australia and sells it.

“When given the opportunity we also love to spin records,” says Sullivan. “We pop up at wineries in the Barossa Valley, Clare Valley and McLaren Vale, too.”

She grins. “Wherever we can get a decent beer, wine or cup of coffee, we’ll be there.”

What started as one crate of music at Carclew Dusk Arts Market in 2014, now involves lugging 1500 records to Flinders Street Market, Gilles Street Market, The Wheatsheaf Hotel and various festivals. They’ve also been spotted at Bar 9 and at Steven ter Horst Chocolatier.

Crackle & Pop will next take up residence in the city’s Lindes Lane on April 16 for the annual international Record Store Day. DJs, including Troy J Been and Oisima, will be on the decks, and keep your eyes peeled for a special David Bowie release in the racks.

Every Record Store Day, independent retailers get a list of exclusive releases and limited runs from the founding organisation, which collaborates with record labels. The stores pick their preferences from the list, though there’s a bit of pot luck in what they’ll actually get. “It’s like Christmas for the retailers,” says Cnotek. “I’m confident we’ll have quite a good range.”

Like its ever-changing pop-up locations, Crackle & Pop’s regular stock is varied. “We’ve pretty much got everything,” says Cnotek. “From Johnny Cash to Wu-Tang Clan. We’re not elitist. We’re quite happy to have Taylor Swift right next to Slayer. It’s about getting music out there and enjoying it. The bigger the range, the better.”

Crackle & Pop also accommodates customer orders, calling in special requests from America and the UK, especially hip-hop. “We lived in London for two years,” says Sullivan. “Vinyl never really died out there. Resurgence was due in Australia.”

Both Cnotek and Sullivan work day jobs to keep their passion project spinning but while demand is there, they’ll keep going strong.

“We like collaborating with local, likeminded independents,” says Sullivan. “Pop-up is great and gives us our point of difference but one day we’d like to have a bricks-and-mortar store.” 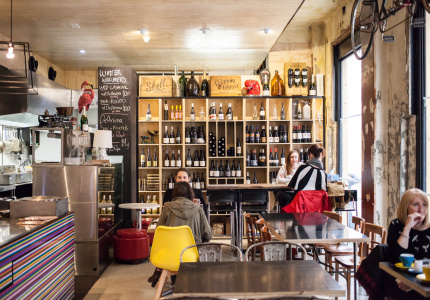