With more than 80 authors on the program, Adelaide Writers' Week can be a little daunting. We sat down with director Laura Kroetsch to get her top picks. 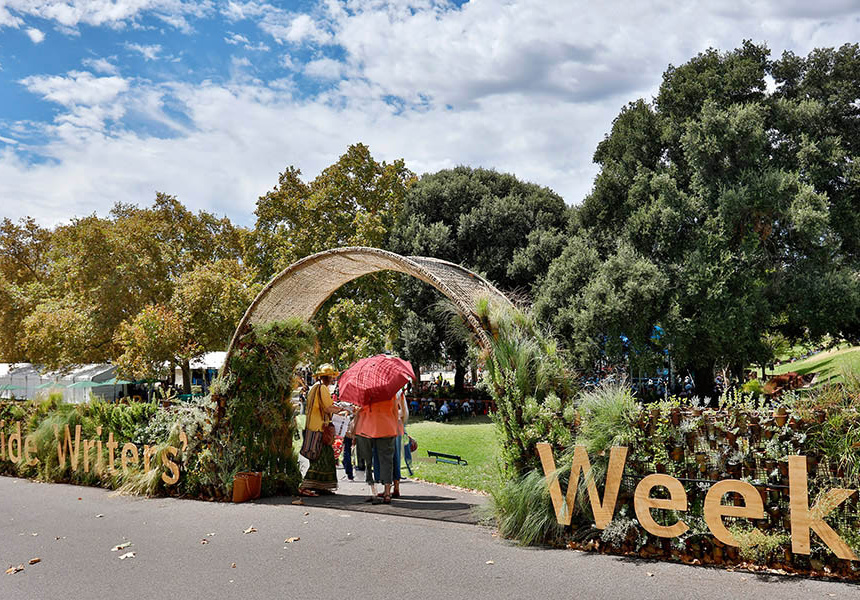 The Whitehouse broadcasts all of its press conferences via Facebook Live. Someone screen-capped one of the broadcasts. It’s an image of Donald Trump’s press secretary, Sean Spicer, standing at a podium. His face is almost entirely obscured by red angry-face emojis. The image is captioned “modern discourse”.

The problem with being in this almost constant state of reacting – of being as reactionary as social media and a lot of our news media require us to be – is it doesn’t encourage us to be empathetic. At best, it’s isolating. At worst, dangerous.

Adelaide Writers’ Week, which takes over the Pioneer Women’s Memorial Garden this week, offers a remedy to the outrage cycle. Director Laura Kroetsch sees the festival as a chance for people to stop reacting. “I think what Writers’ Week does – because it’s free, and it’s really important that it’s free – is create a safe place for people to come together and not necessarily agree with each other, but listen. It’s an opportunity to see people from other cultures, from other language groups and other walks of life they wouldn’t necessarily see, and they get to hear these really important stories,” she says.

“We forget quite often that behind the news is us. Just regular human beings… so this year I really wanted to have books that focused on regular people. People who are living with a one-child policy. People who are living in Palestine. What it means, and continues to mean, to be Syrian and living in a war zone. Because I think here in Australia, we can forget how privileged we are … not many people live the way we do. A lot of people who live here haven’t had to consider if the water that comes out of the tap is clean.”

The 2017 Adelaide Writers’ Week program is filled with writers who agitate, resist and force us to think further. It’ll tackle topics such as the refugee crisis, modern racism and, of course, Trump (possibly all at the same time). Here are some highlights:

Thomas Frank
A master political analyst, Thomas Frank’s newest book Listen, Liberal dissects the failings of the American Democratic Party. According to Kroetsch, the book changed and challenged her own beliefs about herself. “What is outlined in Listen, Liberal is how the American white middle classes stopped listening. They stopped listening to people of colour. They stopped listening to working classes. Which is a problem and it’s something the left simply cannot do.” Frank will be joined by Australian journalist Jeff Sparrow – who recently released a biography of civil-rights activist and performer Paul Robeson – in a conversation about the history, present and future of the Left.

Jessa Crispin and Lindy West
With the programming of Bad Feminist Roxanne Gay in 2016 the festival responded to the outpouring of feminist voices in the media. In 2017 two very different kinds of feminists will speak on their own brand of feminism. “I think we are in a really interesting moment in terms of what feminism is and what it means,” says Kroetsch. “A few years ago I chaired a session full of young woman, and I foolishly asked, ‘Who here is a feminist?’ and no one put their hand up. A lot of people shared the sentiment: ‘I believe in women’s rights, but I’m not a feminist, but I don’t know what I am’. That planted a seed. What does it mean if you don’t want this movement or you do?

“The thing with Jessa Crispin and Lindy West is they represent two different, but quite interesting parts of feminism. Lindy is from a quite active branch of feminism, which is online; it’s about how women have the ability to make something a feminist act because they do it. Jessa Crispin is on the complete other side of that argument. [To her] feminism is a political movement that involves political action and [she believes] this new brand of feminism is narcissistic. I know that young women prefer Lindy West, but I think they should also listen to Jessa Crispin because I think a lot of what she has to say is true.”

Yuri Herrera and Krys Lee
Mexican writer Yuri Herrera’s novel, Signs Preceding the End of the World, won the 2016 Best Translated Book Award and featured on the Guardian’s Best Fiction of 2015 list. This year he published The Transmigration of Bodies. Both of his novels navigate the tensions at the US-Mexican border. Krys Lee’s debut novel, How I Became North Korean, tells the stories of two people escaping North Korea. Both writers will be in conversation to discuss border crossing.

Kroetsch says she wants her program to provoke discussion and thought. “We're not addressing the refugee crisis in Australia and we're not addressing it well globally,” she says. “We're looking at the largest displacement of people in our history and it's something we need to talk about. I had an experience a few years ago where a woman came up to me and she said, 'I know what you're doing with all of this refugee stuff. And I'm not saying I agree with you, but I'm thinking about it’. And if you come here and get a different perspective, that's all I can ask ... that's all we want.”