Voices from the Uprising: Gardens Speak

A powerful sound installation at Adelaide Festival honours the unheard voices of the Syrian civil war. 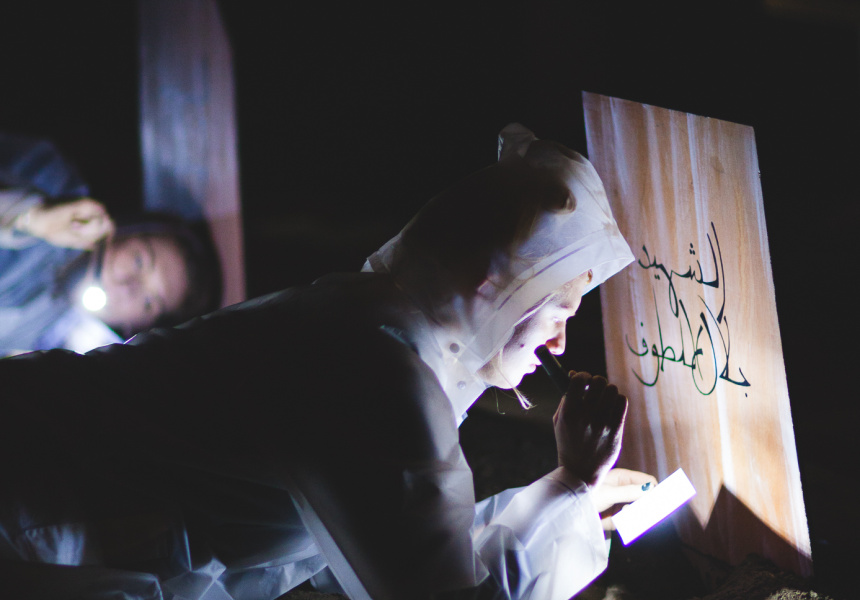 Adelaide Festival always pushes boundaries, but one artist is busting them open completely.

London- and Beirut-based artist Tania El Khoury brings her powerful sound installation, Gardens Speak, to the festival in March. Tonnes of dirt will be trucked into the Queens Theatre and 10 wooden tombstones will be erected to create a space for reflection, solidarity and understanding.

Ten visitors at a time will wear plastic coats and be guided by torchlight to one of many graves spread across the floor of the theatre. There, at the foot of a tombstone inscribed with the name of a deceased Syrian protester or activist, audience members will lie in the dirt to listen to the voices of the buried speakers.

Each narrative will recount the story of someone killed in the 2011 Syrian uprising. The stories have been carefully constructed through interviews with family members and audio traces of their final moments.

“These are the stories of people who, at the start of the Syrian uprising, were killed by the regime and buried in home or public gardens for various reasons,” El Khoury says. “Sometimes families couldn’t get to official cemeteries because of shelling.

“The regime was targeting funerals because they were places where those who died were celebrated as martyrs and because people showed and released their anger there.”

The stories told from beyond the graves belong to ordinary people; shopkeepers, teachers and activists, all taken too soon by the violence of the ongoing conflict. El Khoury believes telling these stories is important – to present the human face of war, too often silenced beneath death tolls and statistics.

“These Syrians wanted to change the regime, they wanted freedom, they dreamed of a better life. I think it’s inspiring to hear, but it also allows a humanisation that is lacking when we talk about ‘others’ in the West.”

Gardens Speak is bound to move visitors, but El Khoury insists the piece will not be overly distressing. “The audience is not going to be pushed or troubled. It wasn’t made with the function of shocking an audience. It’s very much gentle and, I think, an invitation to a space that takes care of the audience and makes them feel comfortable.

“Their own political views are allowed to surface and, [from there], their own ideas start to be challenged.”

The installation is one of a number of El Khoury’s recent pieces that focus on oppression, uprising and war. In the past she has created poignant installation works about student protests in London; the effects of the 2006 Israel-Lebanon War; and Syrian refugees who have fled to camps in Munich.

Gardens Speak is more than a series of poignant stories; it’s a full-body sensory experience. “I’m interested in allowing people to get to knowledge physically, rather than just cerebrally or just reading the news. It’s another layer of affect; through smelling, hearing, touching. It just needed to be like that.”

Gardens Speak will be open to visitors from March 4–18 at the Queens Theatre, Playhouse Lane, Adelaide. Tickets are available at the Adelaide Festival website.