“I want people to feel the absolute punch in the gut, the ache, that a lot of my mob actually feels when they’ve lost somebody.” 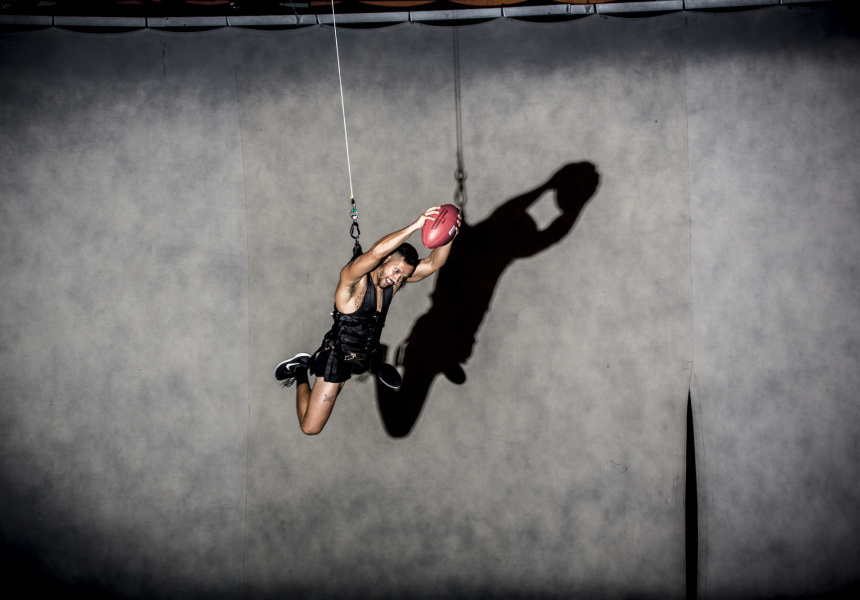 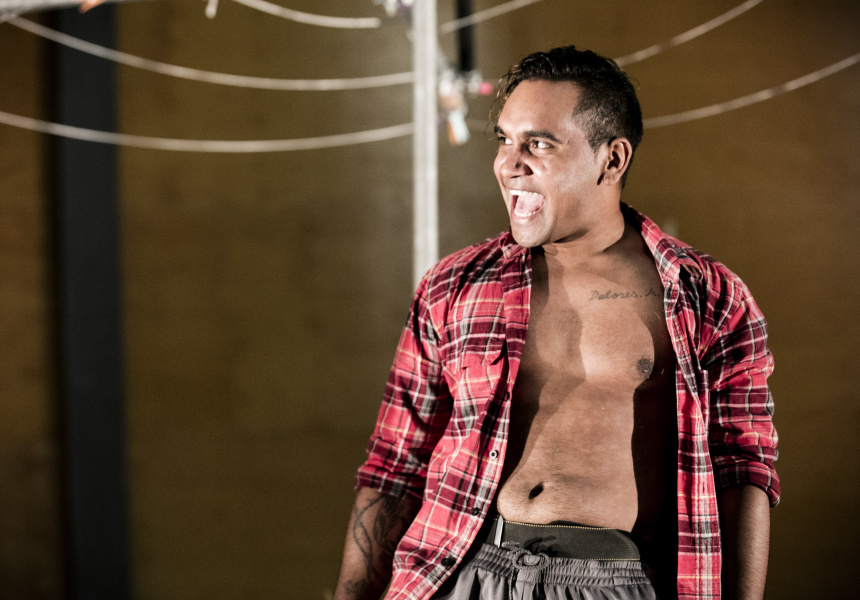 In March 2016 a 10-year-old Indigenous girl committed suicide in the remote Kimberley region of Western Australia.

Grief and outrage echoed equally loudly, sparking a coronial inquest into her death, and the suicide deaths of 12 other Indigenous youths in the region. This month the coroner found each death was linked to intergenerational trauma and poverty; some of the children had lost a family member or friend to suicide.

The “contagion” of Indigenous youth suicide – and its ripple effect – is at the core of Man With the Iron Neck, a work by leading physical theatre company Legs On The Wall.

In this co-commission by Adelaide Festival, following seasons at Brisbane and Sydney Festival, soaring aerial performance collides with delicately scripted storytelling. Based on an original work by Josh Bond, this iteration was written by Ursula Yovich, and co-directed by Bond and Gavin Robins.

Robins has been involved in its development for a decade. “It’s been shaped by events that have happened in the community, and we would constantly reconsider what we’d done, because we wanted to have the right sensitivity to do the work justice,” he says.

Yovich is also part of the all-Indigenous four-person cast. “I want people to feel the absolute punch in the gut, the ache, that a lot of my mob actually feels when they’ve lost somebody. And it’s a constant thing. For me, it’s on the surface – you scratch it and you explode, or cry or get frustrated.”

In a small AFL-mad town with a tight-knit community, Ash loses his best friend, Bear, to suicide. He becomes obsessed with early-20th-century circus performer The Great Peters – or “The Man With the Iron Neck” – who would jump off bridges with a rope tied around his neck, and survive.

But with obsession comes danger, Yovich says. “When we experience this with our own mob, when they do this, we do become obsessed. ‘If only’. ‘I should’ve known’. ‘I only saw them the other day’. But once something is done we need to move … towards healing.”

“[The characters] do experience a loss, and it does hit them hard, and you’re never the same after something like that … But it’s finding a way to exist in this new person that you are.”

“We wanted to make a piece of theatre that wasn’t about suicide, but rather how to not suicide – how to work through the pain in order to hold on,” Robins says.

Doing so in the face of today’s incessant social commentary is an uphill battle. Last month Studio 10 host Kerri-Anne Kennerley was told by broadcaster and TV personality Yumi Stynes she was “sounding quite racist” after she suggested Invasion Day protestors were doing nothing about sexual violence in remote Indigenous communities, and there were calls for Kennerley to be sacked. Stynes was pilloried in the media and the focus of harassment online and in person.

“There are many layers to why young kids – especially Indigenous kids – commit suicide. But it all comes down to feeling useless, and seen by society as useless,” Yovich says.

“To put a blanket over all Indigenous people … I know I just felt so depressed. It makes all our men look like predators … and all our women and children look like victims, and that’s just not the case in most communities.”

At the same time, Yovich recognises giving too much weight to Kennerley’s comments can be costly. “We’re focussed on someone’s ignorance, not on what’s actually happening in these communities. A 10-year-old girl committed suicide.”

Man With the Iron Neck rotates on an axis of physicality which, Robins says, intensifies the fragility of the human experience. “You see people literally hanging on to the end of a line.”

A nightmare scene has one performer tangled in a Hills Hoist and flung around. In a soaring, wire-work-heavy AFL sequence, “You get the double-edged sword of seeing a superhero fly, but then ultimately seeing him fall, succumb to the trauma,” Robins says. “It creates a heightened sense of what is lost.”

As a non-Indigenous theatre-maker Robins says, “You always have that imposter syndrome, that it’s not your story to tell, but I feel privileged to have been invited into a group of Indigenous artists to help tell this story.”

Legs On The Wall is partnered with Balunu Foundation, which runs healing programs for at-risk Indigenous youth. Founder David Cole helped the cast process their own past trauma. “The experience [of losing someone to suicide] is something all of us within the cast – and [Bond] – can relate to, being blackfellas,” Yovich says.

The show’s impact is almost unfathomable; for some, a night at the theatre was literally lifesaving. “As a direct result of the show people have enrolled in healing programs with [Cole],” says Robins, “and they’ve said to him the show, and the healing they received from it, has saved their life.”

For others, there’s visibility through a too-often-closed window into a dangerously underrepresented part of our country’s make-up. “For any action to happen we need to have some empathy,” says Yovich. “I’m not talking about compassion, I’m talking about stepping into someone else’s shoes. That’s what we’re missing right now.”

Man With the Iron Neck runs from March 8 to 11 at the Dunstan Playhouse. Tickets are available online.