From the first Native American US poet laureate to the author of a modern classic that took 15 years to write, director Jo Dyer shares six program highlights 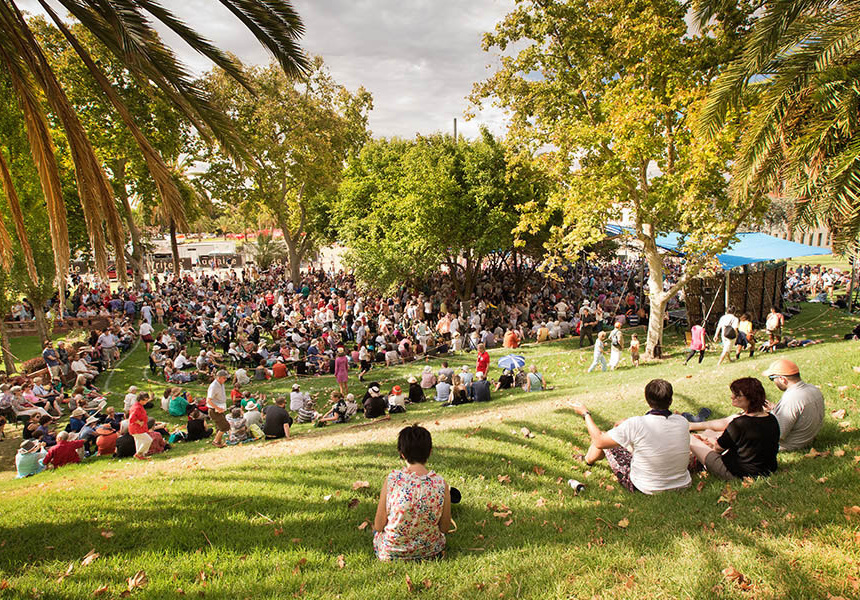 In Jo Dyer’s second year as director, Adelaide Writers’ Week tackles the big questions. The theme of “being human” was settled long before the year started with a series of catastrophic bushfires, but they were a timely reminder of just how vulnerable we are as a species.

Speakers at this year’s event, which is still free to attend 60 years on, will examine the impact we’re having on the planet, but that’s just one interpretation of the theme. Sessions will also address ageing and mortality; the ways we define ourselves in a world where different identities are being discussed, claimed and privileged; and how to express our humanity in a digital society where tech companies have more power (and less oversight) than governments.

“How do we protect our humanity and democracy from these extraordinarily powerful companies?” Dyer asks. In an increasingly connected world, it can feel like reading is one of the last solitary pursuits. So for Dyer, “there’s always a wonderful sense of community when readers get together at these events”.

The program brings 117 writers, poets, journalists, historians, scientists, politicians and academics from around the world to the Pioneer Women’s Memorial Garden from Saturday February 29 to Thursday March 5. Here are Dyer’s must-sees.

Politics
Dyer invited Yanis Varoufakis to speak at her inaugural Writer’s Week in 2019. Unfortunately, the former Greek finance minister, dubbed the “rockstar economist”, was busy contesting European and Greek elections. Ironically, now that he’s back in the Greek parliament it’s easier to schedule him in. “He’s such a charismatic man and he’s so sharp,” Dyer says. “And because he’s leading his own party, he’s unbound by the constraints” that rob so many politicians of their passion. As the head of the European Realistic Disobedience Front, he’s still speaking truth to power and asking whether capitalism poses a threat to our long-term survival.

Australian Fiction
“Its one of those years where some of our really great novelists have written new books,” Dyer says, pointing to Australian authors Tony Birch, Helen Garner and Christos Tsiolkas. “But I think that Charlotte Wood's new novel is going to be one of the books and sessions that really excites people.” The Weekend follows three septuagenarian women who have been friends for decades as they deal with the death of the fourth member of their quartet. It explores broad themes like female friendships, ageing, mortality and the way bodies and relationships can both break down. “But,” Dyer notes, “it’s funny. That’s the thing about Charlotte Wood – she’s got this very dry wit that infuses the whole book, even as she’s dealing with big and melancholic issues.”

Gender and Sexuality
“Andrea Lawlor’s novel Paul Takes The Form Of A Mortal Girl is one that readers should discover if they haven’t already, because it has the potential to become a classic,” says Dyer. Like a modern day Orlando (Virginia Woolf’s time-travelling, gender bending classic), Lawlor’s debut novel tells the tale of a young man who can change gender at will. It took 15 years to write and wonderfully evokes its early-’90s setting, but the themes of identity, sexuality and fluidity still resonate.

Poetry
The annual poetry reading will return on Thursday evening, as will a slam-poetry event. But Dyer doesn’t hesitate for a moment when naming Joy Harjo as the poetry highlight. “She’s an amazing talent and an amazing spiritual force, and she’s really exploring what it is to be a Native American woman and diving into what it means to be human”. Harjo is the first Native American to hold the position of US poet laureate, and she incorporates First Nations stories into work that is rich in symbolism and deeply rooted in the landscapes of the American south-west.

Memoir
Though it wasn’t a deliberate theme, many of this year’s speakers have recently released memoirs. Among them are Archie Roach, Tim Costello and Chiké Frankie Edozien, whose account of living as a gay man in Africa is “luminous and illuminating”, says Dyer. But “the big one” is The Erratics. Vicki Laveau-Harvie’s literary debut was released when she was in her 70s by a small publishing house that promptly folded. When HarperCollins reissued it, it began to earn rave reviews and eventually became the first memoir ever to win the Stella Prize. “It’s a fairytale story of someone’s first book,” Dyer says, “but it is also a very dark and not always comfortable read”.

History
More than three decades on, Chernobyl still has the power to fascinate. Like last year’s HBO miniseries, Serhii Plokhy’s Chernobyl: History of a Tragedy explored both the immediate human effects of the tragedy and the long-term ramifications. “It’s very informative”, Dyer says, “but it’s also very emotional. Its great success is that it’s able to delve into the lives of the people affected and look at the aftermath for the Soviet Union itself, from the smallest ruptures in three peoples’ lives to the effect on the entire Soviet Union and the lies which were a hallmark of its response.”