What Are We Doing in This Shipping Container? And Other OzAsia Festival Mysteries

This year the program demands your involvement. 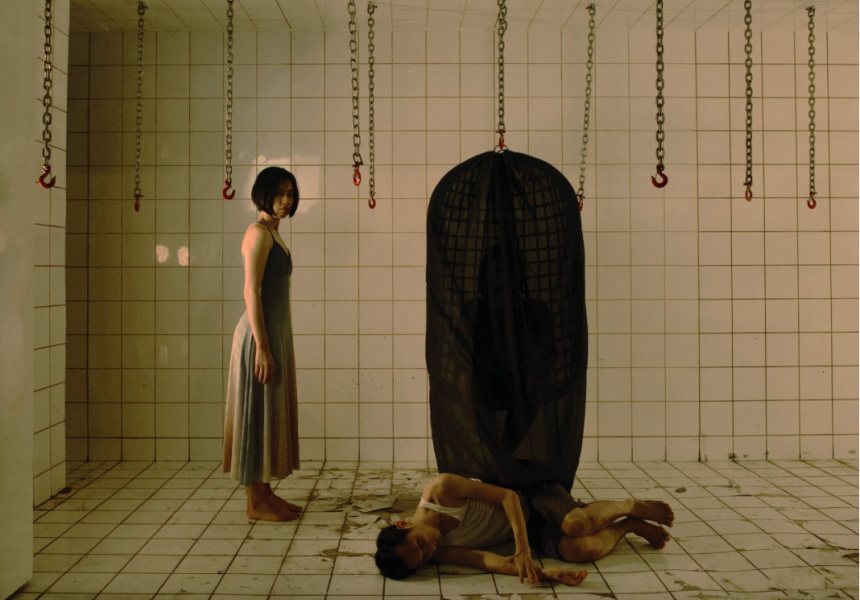 Locked in a shipping container, devoid of all possessions. Dancing go-go in a Phnom Penh karaoke bar. Wandering through neon temples. Clearly, this is a festival not content with just putting bums on seats. Now in its 10th year, Adelaide Festival Centre’s OzAsia has announced its largest program yet. There are more than 200 performances spread over 12 days, on the theme of contemporary Asia. Festival Director Joseph Mitchell's brief is to challenge perceptions and these top picks will certainly do that.

Sk!n
This immersive dance performance about human trafficking is combative and harrowing in equal measure. Audience members are screened and processed like cattle before being directed to secret shipping containers. There, contemporary dancers translate the stories of refugees to the stage. Bring ID and an open mind.

Two Dogs
This screwball comedy has a grungy feel thanks to the musical backdrop, and is largely improvised. The plot of two country dogs with dreams of making it in the big smoke is a metaphor for contemporary Chinese life.

Cosmic Cambodia
Part of the free concert series taking place over 10 nights, The Cambodia Space Project is a retro rock opera combining a sci-fi plot with psychedelic visuals with the aim of getting you on your feet. Classic songs from the golden age of Cambodian rock’n’roll are interspersed with original compositions.

Beastly
After the success of last year's Shedding Light, Tutti Arts is collaborating with Malaysian and Indonesian artists to transform the Riverdeck and Riverside Precinct into a Southeast Asian scene of temples and shrines populated by elaborately costumed characters. Early arrivals will be able to sign up for a limited number of performances in shrines built for a single audience member.

Split Flow & Holistic Strata
Avant-garde Japanese choreographer Hiroaki Umeda turns the stage into a screen and then steps into it as a storm of light and sound reacts to his every move. These two performances are as much multimedia phenomenons as they are dance pieces.

Sub-Verse
OzAsia's answer to Unsound, Sub-Verse, will take over Nexus Arts for two nights of cutting-edge experimental music. Local talent such as Sparkspitter and Joy & Sparks (no relation) will be joined by multimedia underground artists from across Asia mixing genres as diverse as techno, psych rock, Chinese folk and thrashy dance punk.

Johnnie To Retrospective
Showcasing the breadth of the Hong Kong director's work, this retrospective includes violent gangster films, psychological thrillers and a musical set in the corporate world. Heavily allegorical, To's films have influenced a generation of Hong Kong filmmakers. A masterclass will present To in discussion.

OzAsia Festival runs from September 17 to October 2 at various locations. Buy tickets from the Adelaide Festival Centre Box Office and all BASS outlets, or online.