Be whisked across America in this thrilling case of mistaken identity. 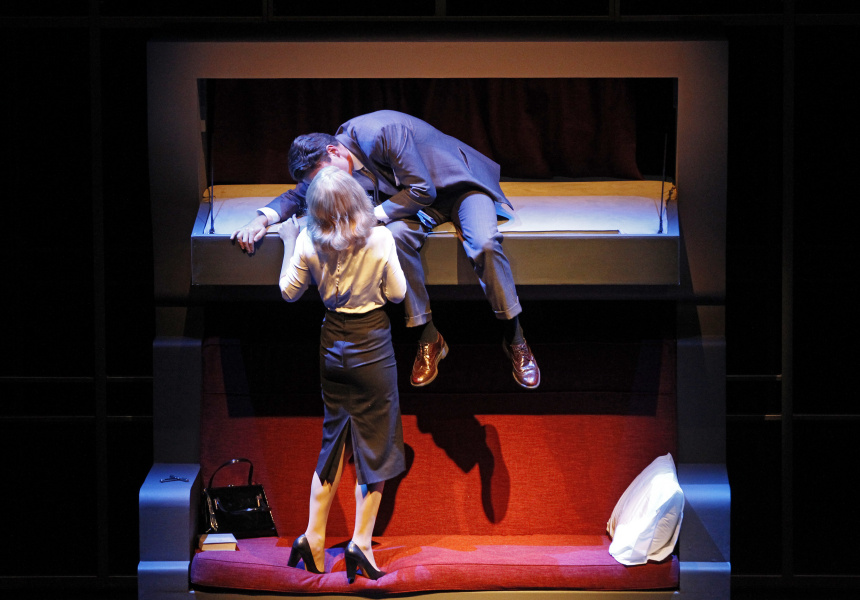 Alfred Hitchcock’s 1959 film North by Northwest tested the technical resources of cinema when it was made. The high-octane spy thriller was supposed to be the “the Hitchcock picture to end all Hitchcock pictures”, according to screenwriter Earnest Lehman. Anyone adapting it had their work cut out for them.

“This was honestly the least likely on my list [of favourite Hitchcock films] to be adapted for the stage,” says actor Matt Day (Rake, Muriel’s Wedding, Sweet Country) who plays the lead role of Roger O Thornhill. “But I think that’s what drew [director Simon Phillips] to it – the challenge. It’s audacious.”

Carolyn Burns’s ambitious adaptation premiered in Melbourne in 2015 before a follow up in 2016, and a stint in the UK and Toronto in 2017. This most recent season started in Brisbane and finishes in Adelaide from December 29 to January 20.

Thornhill is a New York City advertising executive who’s mistaken by the Russians as a spy. What follows is a cross-country quest to clear his name, while trying to save the furtive Eve Kendall (played by Adelaide actor Amber McMahon).

“This is the next best thing to being in a Hitchcock film,” Day says. “It’s like a pinball machine that lights up and fires me around and bounces me off the walls for two hours.”

North by Northwest tracks Thornhill as he’s whisked across America. Fans of the film will recall fast-moving taxis and trains, the heart-in-your-mouth face off with a crop duster (agricultural aircraft), and a cliffhanger (no pun intended) on Mount Rushmore. “Hitchcock always, unapologetically, made his films with the audience in mind,” says Day, “and [Phillips’s] direction is in the same vein as that.”

Expect the same glimpses of grandeur – but in real life. It’s been nearly 60 years since the film’s release, but the special effects used in this production pay homage to it. “A lot of miniatures, models and a bit of rear projection … combine to recreate those sequences,” Day says.

“There were actually some discussions with the film’s original studio about bringing it to the stage,” he adds. “They came and saw the opening-night performance in Melbourne [in 2015] and they’re 100 per cent behind it.”

“There’s a great pleasure for people who are fans of the film, or people who have only seen it once or twice, in seeing how we achieve all of it on stage,” Day tells Broadsheet over the phone after a matinee performance in Brisbane. “Let’s just say we haven’t had any quiet audiences. By the end of it they’re completely bowled over.”

Parts of the film’s original score, by American composer Bernard Herrmann, overlays the action. It’s supplemented with music composed by Ian McDonald specifically for this production. “It still has that Herrmann feel to it, though,” Day says.

“Hitchcock was always the master of making you want to know what’s going to happen next,” he says. Drop into his world at a post-show party on New Year’s Eve. Mingle and ring in the New Year with the cast – in costume and character. It will be in the Adelaide Festival Centre’s Banquet Room, which overlooks Elder Park, the River Torrens and the city’s fireworks display. Your ticket includes food and drinks.

North by Northwest runs from December 29, 2018 to January 20, 2019 at the Adelaide Festival Theatre. Tickets for the play and New Year’s Eve party are available online.