The Rise and Rise of Handpicked Festival

The locally born music festival returns to Langhorne Creek this weekend with its most impressive line-up to date. Plus a double-decker bus bar, “cocktail forest” and more than 20 food trucks. 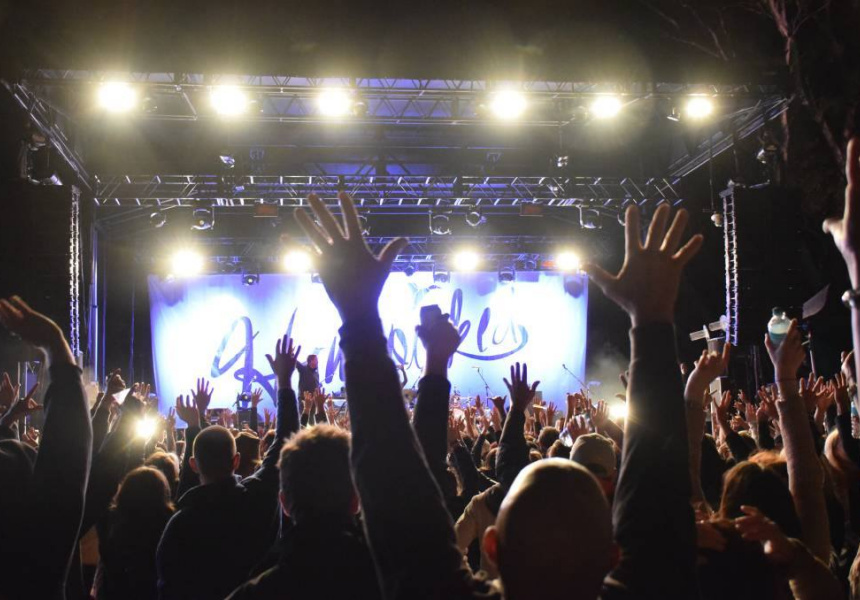 A double-decker bus bar, a “cocktail forest”, market stalls and more than 20 food trucks will make their way to Lake Breeze Wines this weekend for Handpicked Festival.

The family-run event, which sold out last year to a crowd of 4000, has secured its most impressive music line-up to date: Boy and Bear, Broods, Ball Park Music, Vera Blue and Alex Lahey will take to the stage.

It’s the fifth iteration of the festival, which has grown from 3000 attendees in 2014 (Jessica Mauboy, Sheppard and Thirsty Merc headlined the first one) to an anticipated 5000 this year. “We’re nearly there now,” says founder Kate Cooper.

Cooper’s journey to the world of events is somewhat unconventional. At 20 years old she left her home of Langhorne Creek for Queensland. It was while working in retail that a chance meeting led to her taking a role in PR. “One of my customers owned a PR company, and she [offered] me a job,” Cooper says. “So I ended up getting into PR and events up in Queensland. From there, I got offered a job in Tamworth, so I moved to NSW and ran some events there.”

When she returned to SA Cooper landed a job at the Adelaide Fringe – where she still works today – and dreamed up Handpicked after realising the vineyards and gum trees of her family’s winery would be the perfect setting for a live-music event. “I thought, ‘We’re actually so lucky here in South Australia’,” says Cooper. “I was 20 years old when I left – I didn’t really appreciate it. Now that this is my family home again, I just wanted to show it off to people.”

The family connection doesn’t stop at the festival’s location, either. A DIY ethos informs the event right down to the smallest details: while we talk, her uncle is on a tractor placing lights around the venue, and her grandfather is putting a picket fence up. “Nanny sews all of my bunting that goes over the Food Garden, and Grandpa and my uncles hand-make all of the signage,” says Cooper.

It might be done on a shoestring, but Cooper, now 26, has managed to pull some big names. Last year’s event saw Jet play their first SA show in six years. They were joined by national radio darlings Matt Corby, San Cisco and the Jezebels.

Securing artists from interstate and overseas – in the case of New Zealand act Broods – was helped along by Cooper’s long-held industry connections. “I work with a friend of mine – he’s in Darwin. I pick out the artists that I want and he puts in the formal offers,” she says.

Who is he? Mum’s the word. “Otherwise, other people will get him to do the same!” says Cooper, laughing.

The festival is also a showcase for local artists. Each year Cooper puts a call out for South Australian bands to send her their music before whittling the list down. This year’s local contingent features the Sundance Kids, Neon Tetra, Ollie English and Laura Hill.

“I’m really excited about the Sundance Kids,” says Cooper. “And super pumped about Ollie English. I’ve watched him five or six times now at gigs, and loved it. It’s kind of worked like that with all of the locals – I’d watch them and see what they’re doing. The majority of them are such lovely people, I want to support them.”

Camping is available for those who wish to stay the night. “Tent City” has room for up to 1000 campers and a limited offer for glamping. New this year is a Premium Space, which includes a private double-decker bus bar. “You can go on to the top of the bus and look over the vineyards and over the stage,” says Cooper.

And it wouldn’t be a festival at a winery without wine. Naturally, Lake Breeze Wines will be available by the glass. The Cocktail Forest returns, and Cooper says they have “stepped it up a notch this year”. Cocktail shakers from Port Lincoln wine bar The Rogue & Rascal will be making rosé, moscato and sangria cocktails.

More than 20 food trucks – including Staazi & Co, Let Them Eat, Moi An Vietnamese and Squid Inc – from across South Australia will converge for the festival. Hampers from Graze Gourmet Platter Co are available to pre-order.