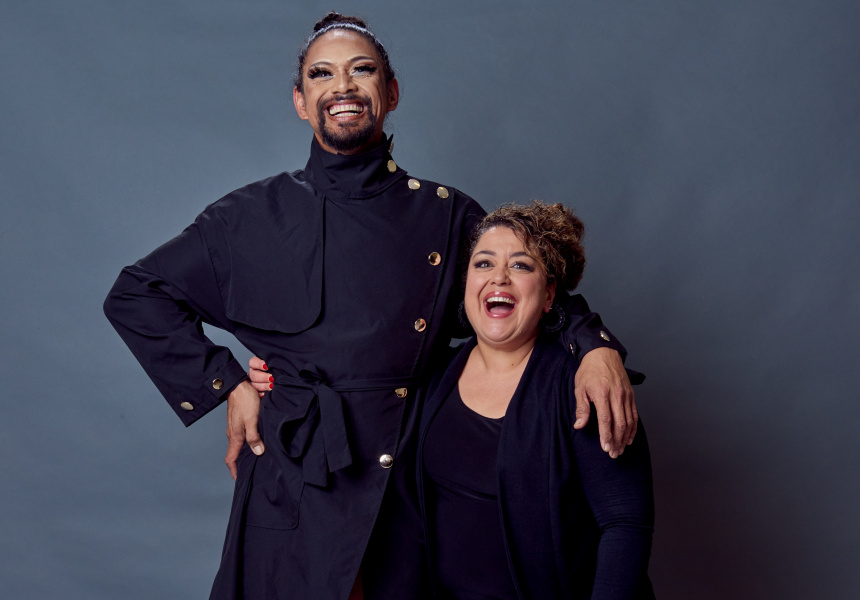 Sasha Zahra, the co-creator and director of upcoming Windmill Theatre production Rella, didn’t think much of Cinderella when she first saw the story in a book.

“I don’t know that I particularly had a massive connection to the story as a child,” she admits. “But I guess what interests me about taking a classic like this is [using] … the archetypal characters and the rules of a fairytale as a launching pad to reimagine this story. It’s almost like we’ve taken the story and smashed it into 100 pieces, and we’ve remade our version.”

It’s no surprise, then, that Rella is a radical departure from the original. Premiering this week at the Dunstan Playhouse, the show takes the bare bones of the Cindarella story and turns it on its head: the musical focuses on sister act Afa and Sika (played by drag artists Fez Faanana and Thomas Fonua) and Rella (played by singer Carla Lippis), who, after entering a television talent contest, face separation when Rella is offered a solo recording contract (with “Prince Charming Records”). This prompts the “ugly” sisters to embark on a journey across magical realms, so they can find their rightful place in the limelight.

It’s a bright, charming take on the tale, and by giving more dimension to Cinderella’s sisters, it provides the perfect opportunity to explore the notion of what it means to be beautiful, says Faanana, who’s also co-creator and co-choreographer.

“The sisters go on this journey of self-discovery after being smeared as ugly on a global stage, and the two turn inward, to their culture, to find their power and reclaim their beauty,” he says.

“The nature of beauty is changing from how it’s been conceived in stories like Cinderella. And our show uses that as a jumping off point to look at what beauty means now, and what we think it could mean in the future.”

Rella is also an opportunity to showcase Samoan culture – a somewhat organic outcome of the involvement of Faanana (Briefs Factory International) and Fonua (Australian Dance Theatre, Kween Kong). “When we first started conceiving of the work, that probably wasn’t the clearest part of the idea … the idea initially was the retelling of the story from the perspective of what we know as the ‘ugly’ stepsisters,” says Zahra. “I knew I wanted Fez and Thomas Fonua to play those characters … but it wasn’t until we really started diving into the reimagining of the story, a few drafts in, that we really landed on feeling like … If we’re telling it from the eyes of these two sisters … how do we bring Pacific Islander culture and storytelling into the work? How do we frame it or tell it through that lens?”

“The show re-casts the ugly stepsisters as Samoan fa’afafine, which is a third gender in Samoan culture, the embodiment of both masculine and feminine in the single person,” adds Faanana. “There’s an inherent magic to the figure, that they can contain so much in just one body – that they can blur lines and create a new type of beauty. It’s quite powerful. Bringing that to the fairytale space and to a kids’ show is really exciting.”

“Queerness”, he says, has always been in children’s entertainment. “It’s been in all entertainment – in panto through drag and through the sense of camp that is inherent in a lot of children’s work. It’s fun to put a new spin on it in Rella and use drag as a way to rethink beauty and ugliness. And to have some fun with ideas of gender, too.

“I think what we really wanted to do with Rella was create a work that talked about all of this stuff but didn’t do it through a lens of trauma. The show is a good time. It’s joyous. There’s dancing and amazing songs. It’s got a lot of heart, but it’s a party.”

The project has brought together an impressive array of talent. In addition to Faanana, Fonua and Lippis, it stars the Helpmann award-winning Elaine Crombie; and is written by Wotjobaluk and Ngarrindjeri writer Tracey Rigney. And its dazzling, colourful set doesn’t rely on stale fairytale cliches.

“There are bright, block colours. It’s very bold, there’s lots of layers and platforms within the set,” explains Zahra. “And then layered on top are elements of Pacific Islander imagery, [which are] built into the design through the costuming. It’s pretty fun, it’s pretty big… Our lighting and AV designer, Chris Petridis, is certainly going to town.”

Rella is the latest in a series of productions by Windmill that take classic children’s stories and turn them into something new, and it’s something that Zahra is passionate about. But it wasn’t without its challenges: reimagining a story without its protagonist being a protagonist required plenty of creativity.

“As soon as we cracked it, we just were so excited by the possibilities”, says Zahra. “I guess [the next step] was giving ourselves permission to be wild and playful and larger than life. Because that’s what these performers, who this work has brought together, are incredible at.”

Rella is on from May 26 to June 4 at the Dunstan Playhouse, Adelaide Festival Centre.