Rabbits: An Exploration of Home, Immigration and Tea 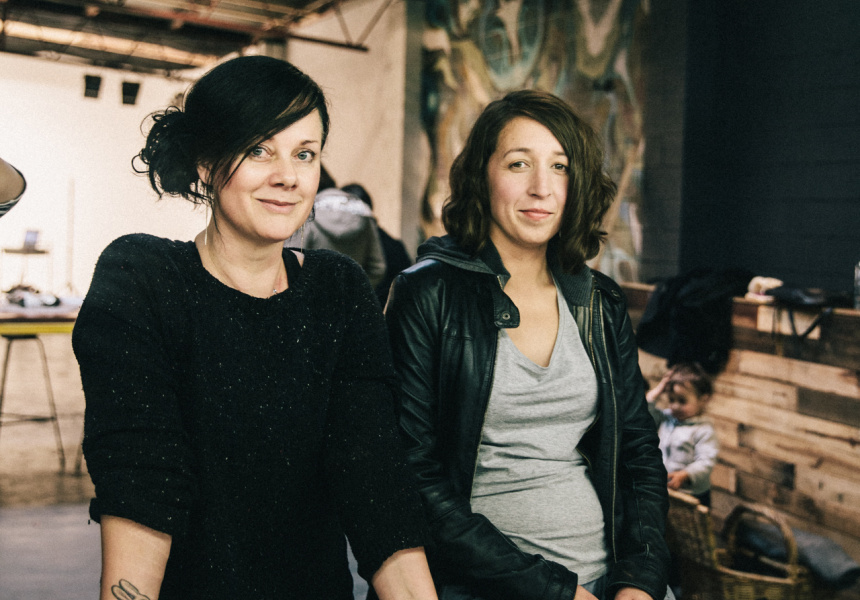 The often-impenetrable fourth wall is shattered even before you take your seat at Welsh-born playwright-performer Emily Steel’s irreverent one-woman show. Life inspires art in Rabbits, a quasi-autobiography in which Steel portrays a British woman who has settled in Australia. It seems fitting to start with tea.

The State Theatre Company of South Australia supports one independent production each year with its State Umbrella program. Rabbits is this year’s pick. It’s been in development “on and off” since 2012, in association with Adelaide Festival Centre’s inSPACE program.

In between developments Steel had a baby, and everything changed. “The original story had kind of gone out the window,” she tells Broadsheet. Director Daisy Brown suggested Steel, who moved from the UK to Australia in 2010, write about her own experiences as an immigrant. That’s what she did.

“We realised I had essentially written it in my own voice,” says Steel. “The rhythms of it just sounded like they ought to be spoken by me.” Her plans to write (and not perform in) a conventional three-actor show went out the window.

“It’s all taken from life, though,” says Steel. Her character is a world away from home. The culture shock that comes with settling in a new country, and the inevitable interactions with those around her, are a rude awakening (though the play acknowledges her privilege coming from “the right sort of country”).

“We have knee-jerk prejudices we don’t necessarily want or like,” says Steel. “You meet a person; you make assumptions … She is those moments you’re not very proud of.”

Steel’s personal journey deviates from that of the character she portrays. “I’ve recently realised how at home I now am here and how much this feels like my community,” she says. “This character never reaches that.”

As one of Australia’s most pervasive introduced species, “Rabbits” – as a metaphor – speaks to the world’s far-reaching immigration concerns. “It’s not simple, and I don’t think we’re talking about it – and the complexity of it – enough,” says Steel. “It’s hard to conceptualise a whole country … so I started working with the idea of a house.”

Your emotional connection with your house, and the sense of invasion that comes with someone entering without permission “lets you think about space, and ownership of space, in a different way,” Steel says.

There’s a “logic problem” in the immigration debate, she says, pointing to the white settlement of Indigenous land in Australia. “People who have been here for some time feel it is their place, and they don’t want someone to take it from them … even though they, in turn, have taken it from someone else.”

The issues are complex, but Steel’s performance comes with an often-relatable dark humour that challenges her desperately polite (and British) invitation to take tea. “Either [the audience] recognises themselves, or they find it confronting, or they reject it,” says Steel. “If we don’t acknowledge that we think these things, even if we don’t want to, I don’t know how we get past them.”

Although it’s a “one-woman show”, Sam Calleja and Dee Easton – who have been a part of Rabbits since its inception – provide “performance support”. “We had to invent this name for them,” Steel says. “They’re not quite actors, but they’re not quite stage-management.”

The choice to stage Rabbits at Plant 1 Bowden, a warehouse space, was a calculated one. “One woman standing in a very vast, empty space … you can see that loneliness,” says Brown. “But you have been invited into a home, in a comfy space.” It’s a stark contrast that can’t be achieved in a conventional theatre.

Each immersive, 50-person session starts with a cup of tea courtesy of South Australian tea-maker Brewed by Belinda. A soundtrack by local composer Mario Späte breaks up the dialogue.

Ultimately Steel wants audiences to think twice about their assumptions. “The world is complicated [and] messy,” she says. “But unless we figure out how to live together, we’re gonna destroy each other.”

Rabbits runs from September 21 to October 14 at Plant 1 Bowden. Tickets are available online.