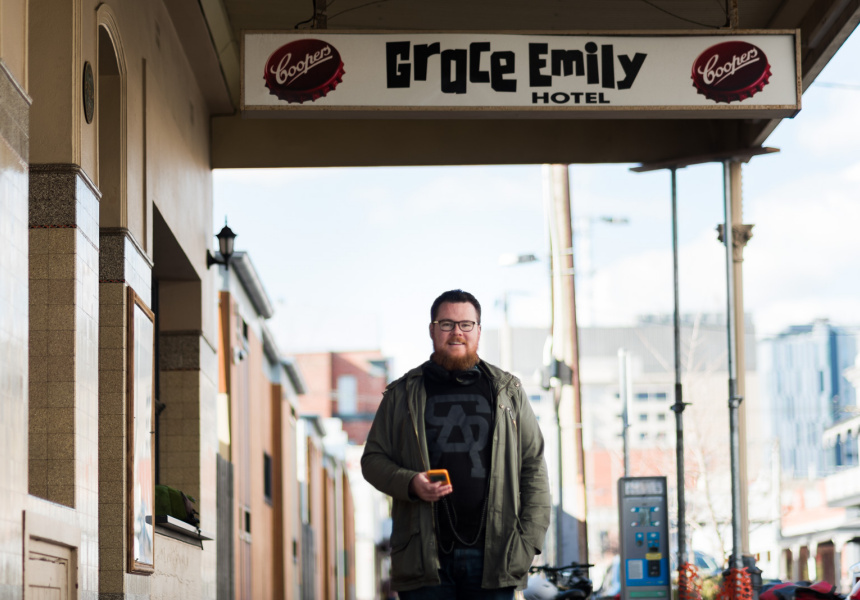 Luke Penman is no stranger to the local music industry. In the past decade he’s been a blogger, artist manager, podcaster, Radio Adelaide music director and host of the station’s flagship music program, Local Noise. But his daily presenting gig (and role as director) came to an end last September when Radio Adelaide cut most of its staff following the University of Adelaide’s decision to offload the station.

With that background it’s easy to see how Penman’s new venture – an online radio station playing Australian music, much of it from Adelaide – could be mistaken for a Local Noise 2.0. But Play/Pause/Play existed before Penman ever set foot in Radio Adelaide.

“It’s a brand that existed years ago, that I started as a South Australian music blog,” Penman tells Broadsheet. “I started a South Australian music podcast attached to that … that’s what actually led to me getting involved at Radio Adelaide in the first place. Because I was doing the podcast, and I went, ‘Hey, I should find out how to do this thing that I’m doing’.”

The project is driven by Penman’s passion for sharing local music, and frustration at the refusal of other stations to do the same. “There’s been a lot of talk about local content quotas on radio,” he says. “The voluntary quota is only 25 per cent between 6am and midnight. I’ve seen some of the playlists … suddenly it hits 11 o’clock and it’s all Australian music for an hour. That’s how they deal with the quota, instead of spreading it out.”

“The point of difference to other things like Triple J or commercial stations is that it’s local,” says Penman of Play/Pause/Play. “It’s way more local than anything else will be. And if you flick it on for 20 minutes you’ll hear at least a couple of artists who are playing here in Adelaide soon.”

It does beg the question: What about local community radio? Like Triple J, community station Three D has an Australian music quota of 40 per cent. And it goes a step further with quotas of 20 per cent South Australian music, 10 per cent demos and 25 per cent music with female artists.

"People always say to me, why didn't I just go to Three D?” says Penman. “Volunteer organisations are fantastic – they give a voice to so many people, and it’s incredibly important – but if there isn’t one person [such as a music director] who’s dedicated to doing one particular thing, then it makes it difficult to work strategically in that area.

“I just went, ‘Okay, there is literally nowhere in South Australia where I can work in this manner, but it’s clearly something that needs to happen. So I basically have to build a job for myself’ – that’s what’s led to [this]."

A Live Music Enterprise Grant from the City of Adelaide helped Penman create the current radio stream as a proof-of-concept. To keep it broadcasting, he’s running a crowdfunding campaign.

He’s already surpassed his initial goal of $10,000. But it doesn’t stop there; $10,000 only covers six months of music licensing and application fees. It’ll take meeting his “stretch goals” – $30,000 and $50,000 respectively – before he’ll get paid himself. But he’s confident people will see what he sees in local music if given the chance.

"Working on Local Noise for 12 months definitely gave me an important perspective on how doable this was,” says Penman. “Every single day I was finding 40 different songs to play. The fact that I was able to do that made me realise, ‘Hey, if I can play 40 different Australian artists a day, I’m sure I can find a few more and people will happily listen to this for eight hours, you know?

Unlike the community-radio model, Penman plays songs on rotation, which he says is a bit more like how a commercial radio station operates. He’s “making sure songs are on high enough rotation so people are hearing them enough to remember them … and become familiar with them."

To donate visit the crowdfunding campaign.