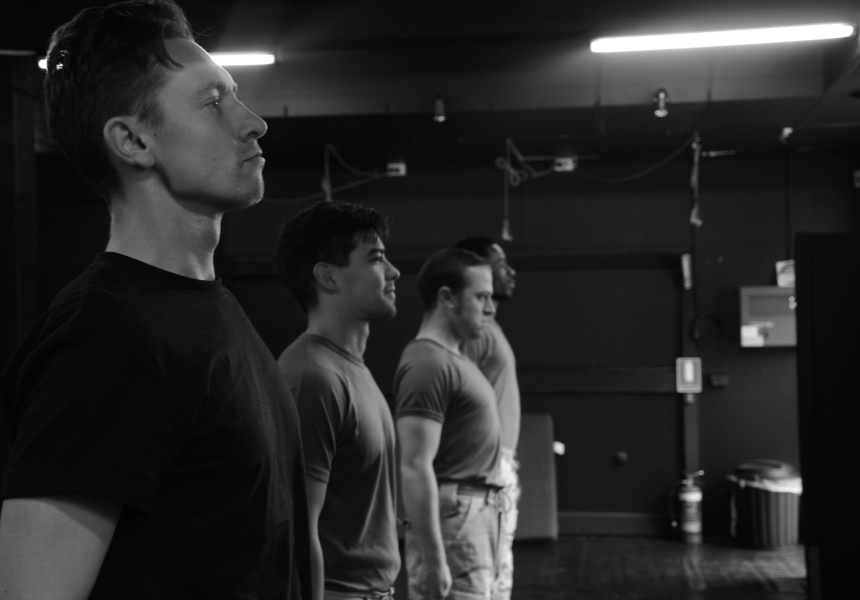 “I don’t think there is another theatre company [in Adelaide] doing work like we’re doing,” says Corey McMahon, director of Theatre Republic. “It sounds like I’m pitching a current-affairs show – but we’re not afraid to tackle the hard issues.”

Adelaide’s newest theatre company makes its debut next week with the Australian premiere of Lines by UK playwright Pamela Carter.

Four young soldiers at the start of army training lie awake in their barracks. “They’re all trying to get away from something in their lives, and they’re looking for something, too,” McMahon says. In the first act, “They’re all pulling in different directions, and they’re really bad at it. The way training works is, if one of you fails you all fail.”

Carter told McMahon the actors should consider the audience “in the world with them”. And because it’s being staged in the intimate 87-seat Bakehouse Theatre, “there’s something about the story being on top of [the audience], rather than that divide you get in the [Dunstan] Playhouse or Her Majesty’s,” says McMahon.

“On the outside they’re all playing this role: the invincible man. But the audience gets access into their fears, their vulnerabilities, why they’re acting the way they’re acting.”

Theatre Republic is out to captivate audiences the way streaming services do. “This play completely bucks the trend in terms of how theatre can tell a story,” McMahon says, referencing its unusual form and “dream-like intensity”.

“The play never stops moving, it’s really fast and it’s quite loud,” he says. Movement choreographer Roz Hervey came on board to look at a few sequences, many of which are overlayed by strobe lighting.

McMahon says the second act “is very hard to talk about in the abstract”. “They basically start to think and act as one; they take on each other’s lines … and when someone gets hit they all feel it as much as the person who’s injured.”

“It’s done through the replaying of a key battle scene from the film Lone Survivor. They re-enact the scene ‘cause that’s how they want to see themselves – as these heroes, these lone survivors.”

The play was originally written for audiences in the UK, where debate was flaring about tactics used by the British Army to recruit young men and women from socially or educationally disadvantaged backgrounds. While that’s not as explicit in Australia, McMahon says, this play “asks questions about the kinds of people we want to fight our wars”.

An Australian Army officer visited the rehearsal room to speak about the culture within his ranks and the demanding physical expectations. “They’ve got to make you into these people … who can get up at 5am, carry 60 pounds of kit, run up a hill and back,” says McMahon. “And they’re not interested in people who don’t have the psychological capacity to do that.”

He recognises a completely male-lead (and directed) production may, at first glance, seem out of touch in the era of #MeToo. “We’re taking a risk in that respect,” he says. “The [movement] is very much, and rightly so, to give a voice and a place on stage to women.

“But as one of the actors Jim Smith said, ‘It’s so important men have this conversation among themselves [too]’. Men have to turn to each other and say, ‘I’ve got to stop acting like that, or I’ve got a mate who acts like that and I’m not saying anything’.”

Lines forces men to be proactive rather than reactive; it explores “the external environmental factors that can contribute to men acting in a way that’s not particularly good towards women – that toxic masculinity”.

Recruiting an all-Adelaide cast and crew supports our under-pressure theatre sector. “We’re in tricky times,” says McMahon. “Funding cuts have pulled the rug out from under everyone a bit. And State Theatre Company can only do so much.”

“The worst thing that can happen to professionally trained theatre-makers and actors is to not work. If they’re sitting in a call centre or making coffee, they’re not match-fit … Either people leave or the pool of people who are match-fit shrinks because there’s only a small number getting work.”

Two new works by local playwrights are slated for development next year: Duncan Graham’s Nil by Mouth, a durational performance inspired by the Lindt cafe siege, and Emily Steel’s Bordertown, based on the lives of Afghan refugee women she met in country Australia.

The political undertone is purposeful. But it doesn’t come at the cost of entertainment. “It’s not agitprop (political propaganda) theatre, it’s not didactic, we don’t stand there and point our fingers at the audience,” McMahon says.

It’s about engagement. “I can make lots of posts to my Facebook bubble. Or I can try to have an impact, however small, by producing work that’s politically engaged. If 20 per cent of people who come to see a play walk away and it changes their perception of the world … surely there’s a knock-on effect.”

Lines runs from October 24 to November 10 at the Bakehouse Theatre. Tickets are available online.