Untethered VR is sending Adelaide gamers back, to the future. 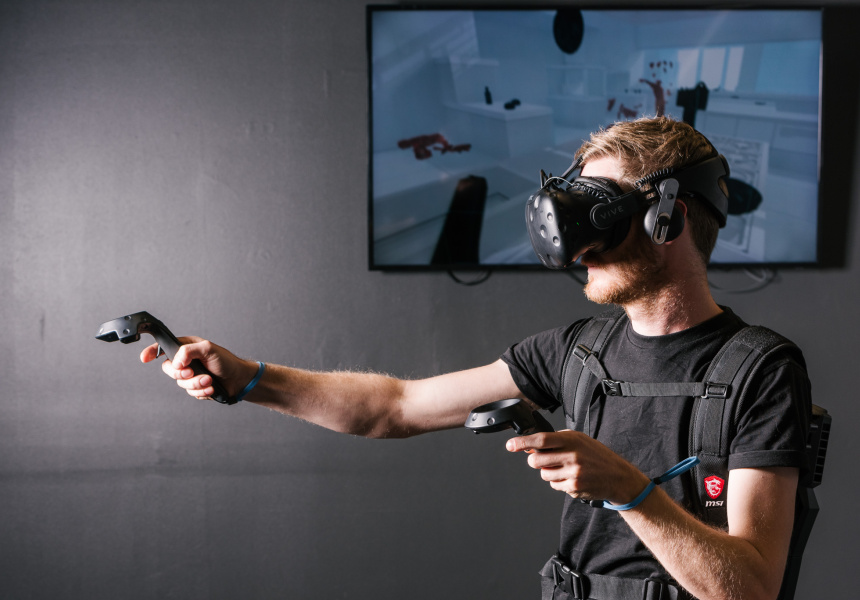 “It’s impossible to look cool while playing VR, but you feel badarse,” says Tom Baxter of Untethered VR as he straps me into full-body virtual-reality get-up.

When the headset goes on I’m transported from the Gouger Street arcade (the first to offer full virtual-reality gaming in Adelaide) to the streetscape of Richie’s Plank Experience. I step into and ride an elevator (complete with cheesy music) to the top storey of a skyscraper, where Baxter encourages me to walk out on to a thin timber plank protruding from the building. I’m surprised to feel my legs tremble as I edge my way out, trying – not very well – not to look down at the 160-metre drop. “Now step off,” I’m told.

Plank is one of a number of titles available to play at Untethered VR, which is run by Baxter with his business partners Tom Berzins and Phil Wu. Berzins, Baxter and Wu discovered the concept on a buck’s weekend in Melbourne a couple of years back. They were instantly hooked. “VR’s come such a long way in the last two years,” says Berzins.

Untethered uses the latest tech from HTC, which is fast, smooth and fascinatingly immersive. Player kits consist of a lightweight laptop worn like a backpack, an audio-visual headset and hand controllers. Older rigs had participants connected to a computer via cables, which could be a jarring reminder of one’s out-of-game surroundings. Untethered’s wireless infrastructure liberates players, allowing them to leap, dodge and swing without restriction.

The arcade’s five bays resemble squash courts more than the neon-lit game caves of the ’80s. There’s no clatter of pinball flippers or blippy 8-bit music, but the shrieks and cheers of players and onlookers remain. “People are really themselves in VR,” says Berzins. “It’s great watching their personalities come out.”

While the glitz may have been toned down, the rush players feel from high-energy gaming is as intoxicating as ever. And don’t worry, you still get to punch your initials into the high-score board. We also tried Superhot: “a Matrix-cross-ninja experience,” says Baxter. Watching someone duck and punch at invisible missiles is almost as entertaining as being in the game. Each bay is fitted with a monitor showing what the player is seeing, and there are other multiplayer campaigns where friends can enter worlds together.

The arcade was almost entirely hand-built by the partners, with a little help from their mates and YouTube. Configuring the wireless network that controls all five high-speed consoles was no issue, but Baxter admits to Googling a tutorial on how to paint walls. “You start in the middle and just go up and down,” he says.

The team is also excited about the further possibilities of VR, beyond entertainment. “Gaming is our bread and butter, but we [aim] to provide corporate training and educational experiences,” says Berzins. Where school excursions might once have visited a museum, at Untethered, “You can go to ancient Egypt or the moon,” Berzins says. Games like Rec Room and Audioshield are suitable for children aged seven and up .

Like cinemas, games arcades – at least in Western culture – dipped in popularity towards the end of the '90s as audiences turned to consuming movies and playing computer games at home, on newly affordable entertainment systems. We’re starting to see a resurgence of cinema culture in Adelaide, driven primarily by the social aspect of theatregoing, and a spike in films and television shows drawing heavily on ’80s and ’90s childhood nostalgia. Could games arcades be the next big thing (again)?