From the Swiss Alps to the streets of Hong Kong, the Riverbank gets re-activated. The team behind Alpine Winter Village and Royal Croquet Club has just returned from the Qingdao International Beer Festival, where it took SA's food and bar scene to China via a two-level, 8000-square-metre pop-up called The Royal Adelaide Club.

Now, in reverse, the team is bringing the tastes of Asia to Adelaide for the Good Fortune Market, which is running in conjunction with OzAsia Festival this month.

The team, led by Social Creative director Stuart Duckworth, will transform Elder Park into an immersive and culturally diverse festival hub for 12 nights. “We’ve drawn inspiration from the back alleys of Hong Kong, the traditional architecture of India, the markets of Singapore and the rivers of China to create a space that is a playground for the young and the young at heart,” Duckworth says.

“The whole idea behind the site design is that it is as much a feast for the eyes as a feast for the ears and mouth. We couldn’t partner up with OzAsia and work with their level of programming without matching it.” 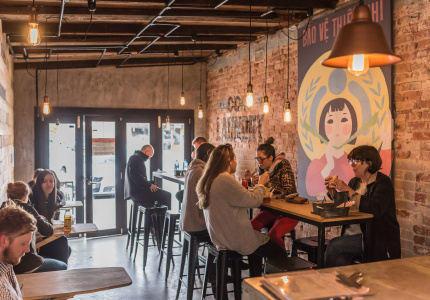