Female and non-binary youth are taking over the Elder Conservatorium this winter to tackle gender equality in the music industry. 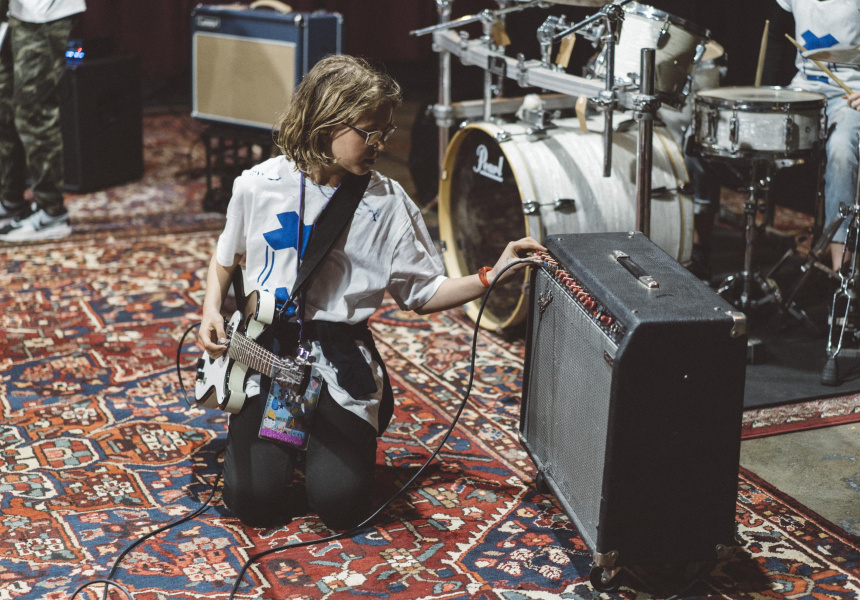 “If you look at music bills, a lot of them have no women,” says Hannah Fairlamb. “That can trickle down to young people … who may be thinking, ‘Is there a space for me?’”

Fairlamb is the co-director of the Adelaide branch of Girls Rock (with Sianne van Abkoude), an international network helping female and gender diverse youth carve out space in the music industry. The concept, which started as the Rock ’n’ Roll Camp for Girls in Portland, Oregon in 2001, launched locally in February.

This winter it hosts its inaugural Rock Camp at the Elder Conservatorium – aka The Con, home of the University of Adelaide’s classical and jazz program. The five-day conference brings together female, trans and gender-non-binary youth aged 10 to 17 years old. They can choose from guitar, bass, drums or synth to learn through workshops and masterclasses with experienced music professionals as mentors. They’ll form a band and learn about songwriting, screen-printing, sound technology and basic music business. There’ll be lunchtime concerts every day.

“A big part of what the program tries to do is provide a really safe, non-judgmental space, where people can feel like they can have a go and not be criticised if they don’t get it perfect the first time,” says Fairlamb, who knows firsthand the barriers that exist for women in the industry.

She’s played in bands for the past decade, including pop-rock trio Ponytail Kink. After finishing an honours thesis on gender in the Australian music industry, she heard about the Girls Rock camp in Canberra and was instantly excited. After mentoring at the Canberra event in 2018 she put up her hand to launch the program here in Adelaide.

In a world that has historically confined women to small spaces, Rock Camp is an opportunity to empower the next generation. “What we want to do is give them a space where they feel like they can spread out a little bit with their bodies and their voices,” says Fairlamb. “Then they can make that into a song or a lyric or a movement.

“There is a lot of negative stuff in the music industry, like harassment and assault. A lot of that is to do with it being male dominated, historically.” Last month three major Australian female artists were either sexually harassed or assaulted at their own gigs over a single weekend.

“There’s a lot of work to do in the culture to change those attitudes, but what we’re doing is right at the other end,” says Fairlamb. “We’re trying to increase numbers of women and gender diverse people coming into the music industry so we can tip the balance … to really come at those cultural changes from a different angle.”

To help launch Girls Rock Winter Camp there’s a fundraiser at the Wheatsheaf Hotel on Sunday May 26 with performances by local musicians Katie Pomery, Naomi Keyte, Emily Davis and Nancy Bates. If you can’t make it to the event but want to donate, you can do it here.