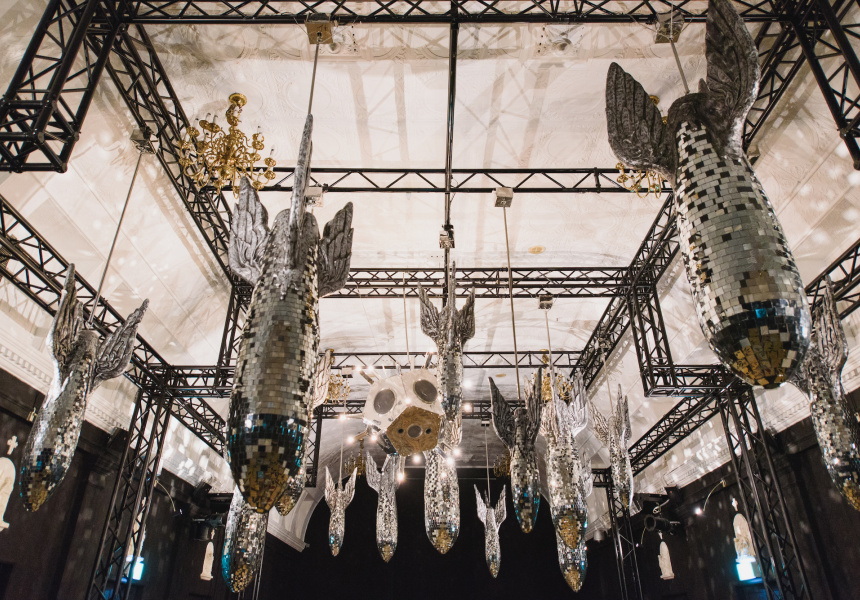 Since Joseph Mitchell took over as artistic director in 2015, OzAsia has evolved into one of Australia's most exciting contemporary arts festivals. Mitchell’s festival is a natural successor to ex-Adelaide Festival director David Sefton's programming style. This year's program is both daring and accessible; there are several productions that are bound to polarise. Works across a broad range of media reflect contemporary Asian identity. Here are a few of Mitchell’s highlights.

When Mitchell first got the job at OzAsia, he set himself the goal of bringing a Kuro Tanino (Japanese theatre director and playwright) production to Adelaide during his tenure. Since converting his Tokyo apartment into a 25-seat theatre, Tanino has developed a singular reputation. A true auteur, the former psychiatrist realises his surreal visions by fulfilling multiple duties as playwright, set designer and director. His works are often dark and surreal – one production had a set that consisted entirely of penises – and The Dark Inn continues that tradition.

“It's set in a remote bathhouse, and this puppeteer turns up because he's been invited to do a performance, but it turns out no one has actually invited him," Mitchell says. "Then all of a sudden all of these characters come out of the woodwork and it's a little bit like Mulholland Drive, where you start to wonder if we're in reality or not. It's got this strange Lynchian feel to it. I think maybe Twin Peaks will have just finished around the time of OzAsia, so if anyone's craving more of that they can come and check out The Dark Inn.”

In 1988, Peter Brooks brought one of Asia's great epics to the Adelaide Festival. His marathon production of The Mahabharata – performed over nine hours – is still talked about with reverence, and among the cast was a young dancer named Akram Khan. “Akram was a kid when The Mahabharata toured way back, and now he's become arguably the world's greatest choreographer,” says Mitchell. “He's gone back to The Mahabharata with this latest production, which is a short excerpt.”

Melding dance and theatre, Until The Lions tells the story of Princess Amba, who was kidnapped from her beloved by a travelling warrior. After she is released, her suitor rejects her and she vows vengeance on her abductor, self-immolating and reincarnating into a new form. The text comes from Karthika Naïr, a poet and dramaturge who has “rewritten it from a 21st-century feminist perspective,” says Mitchell. “It's a tiny story from within The Mahabharata that looks at the role of a woman in what is a very male-heavy, violent, epic tale. I think it's such a wonderful way to relook at a text in this day and age.”

“We've got one of the biggest pop stars in the world,” Mitchell tells us, with a slight giggle. The penny drops when I don't recognise the name Hatsune Miku and he explains “She's not real; she's an animation.”

Despite this, she plays to 20,000 seat stadiums throughout Asia, has opened for Lady Gaga and recorded a duet with Outkast's Big Boi. In The End, this eternal teenager with turquoise pigtails is the star of a “21st-century opera with no orchestra and no singers.”

Performed using Vocaloid technology, a synthesised singing voice, “it's about her figuring out whether or not she's a human being,” says Mitchell. “When she starts to realise maybe she's not a human being she starts to consider mortality, and will she die or will she live on forever? When human beings are all obliterated from this earth, will she be stuck in this eternal void and what will she do?”

The Singapore Art Museum hosts the largest collection of South East Asian contemporary art in the world, but it's the way they went about collecting it that impressed Mitchell the most. “So often major art institutions just try to replicate the western model of a museum – everyone has their impressionist galleries all around the world and so on. But these guys are like 'screw that – we're the heart of South East Asia' and that's really what they take ownership of. I just really love that they're taking their own identity and not trying to replicate every museum in the world.”

After Utopia will bring out “a tiny, tiny, tiny fraction of their collection” but includes a work that resulted in the forced closure of the CP Biennale in Jakarta. The photographic installation Pinkswing Park depicts a glamorous, modern-day Garden of Eden, and - despite being censored - attracted criticism from Islamic fundamentalists who claimed it was blasphemous and pornographic. This exhibition is also probably the only chance you'll have to see giant mirrored bombs hanging in the atrium of the Samstag building.