A Day in the Life of Fringe Performers

Getting bums on seats isn’t easy. We found out why. 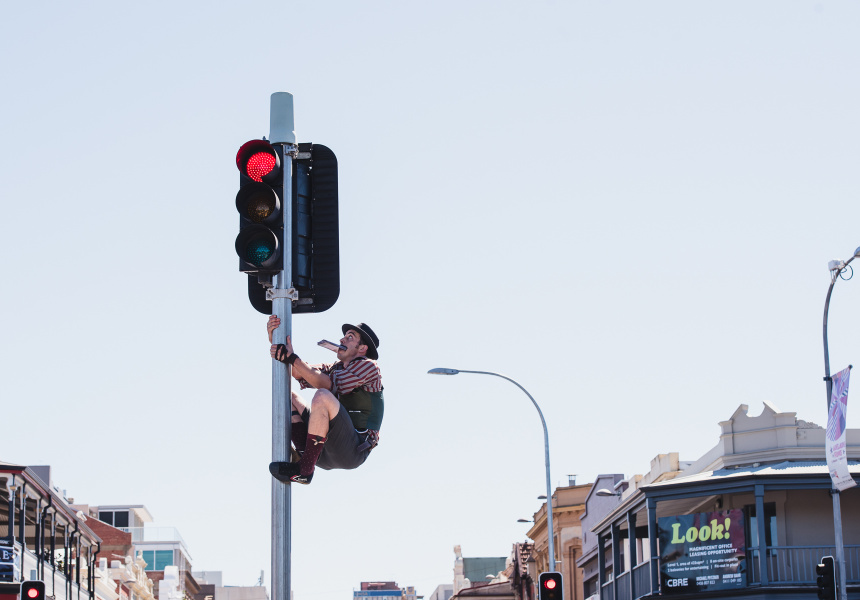 Festival season isn’t all fun and gags. Over 600,000 tickets will be sold during Adelaide Fringe 2016, but for some acts it’s a struggle to sell any. Broadsheet hit the street to find out what goes into drawing a crowd and what comedians put themselves through in an average day.

7am Berlin DJ Peter Baecker is up early to promote his ’80s disco shows for kids and adults. “Adelaide Fringe is a massive overload of your system,” he says. “You get bombarded with emails as soon as you register. Everyone wants you to advertise and tell you how important it is to do this and that.” Instead, Baecker dons a gold suit and dances in public spaces to tunes such as Bonnie Tyler’s Total Eclipse of the Heart. “It’s not about having the coolest or the best show,” he says. “You’re competing with Briefs, Velvet, Hot Brown Honey and Ryan Good; amazing artists from TV, from everywhere. It’s insane pressure.”

10am Across town, one-man circus performer Nikolas Strubbe climbs a street pole. “I wear an Italian devil mask or as a Balinese comic character and banter with folks as they pass,” he says. “Sometimes people ignore me, sometimes their eyes light up.” The seasoned US artist performs The Incredible Feelzo: Man of Moderate Talent in multiple venues. “Audiences here don't yet know me from any other actor, comic or amateur cat wrangler so I've had to set myself apart in any way I can.”

11am Peter Baecker takes the stage at Rundle Mall’s showcase stage. The exposure helps. His first two shows sold 70 tickets each, the third just five, but, “The average audience at Edinburgh Fringe is 1.2 [people],” he says. “Everything above that is a win."

12pm Nikolas Strubbe gets down from his pole for long enough to perform a lunchtime show. He’s got another one at 5.20pm so it’s card tricks until then. “I’ve done impromptu magic shows with drunks at kebab shops, clubbers on street corners, and of course, kids and families,” he says. He’s also been known to ride pedicabs (pedal taxis). “As a bonus, I'd offer a free ride anywhere in the city to anyone who bought tickets.”

1pm Performers chat after a media speed-dating event. For Melbourne’s Rama Nicholas, it was a chance to invite journalists to see her solo gothic adventure Mary Weathers Monsters. She says it’s all about networking and producing a show worth talking about. “Word of mouth can be a powerful thing, especially in a festival like this.”

3pm Peter Baecker has two shows today and needs to eat, but even that is challenging. “I can’t have a $10 lunch and a $10 dinner,” he says. “I have to find the food courts and try to eat organic crisps instead of going to a fancy vegan dinner.”

Baecker scrimps on accommodation and stays at the Royal Adelaide Hospital’s residential wing. “I’ve met artists who didn’t make any money for the first few years. I don’t have rich parents, I don’t have savings … everything I own is in this.” He smiles. “But it’s the best job.”

4pm London-based comedian Wayne Carter promotes Wayne Carter Teaches You to be Fabulous in a frock. “Getting people into my show is quiet possibly the most time-consuming part of my career,” he says. “Standing on a street corner, bellowing and hiking up my dress to reveal my inner thigh is just one of the methods I use.”

6pm Scandinavian Ben Smith totters through Royal Croquet Club dressed as a transvestite moose. He’s part of physical theatre troupe all genius all idiot and turns heads in outrageous costumes. “It has to be about a real, personal interaction,” he says. “We just want to find the right people – especially open-minded, ’70s psychedelia enthusiasts. I’ll never make any money from coming here, but it’s not about that.”

10pm Peter Baecker makes every minute count. “Sunday night, 10.30pm in Adelaide is tough,” he says. “If you have 10 minutes before your show and you don’t have to go to the toilet, freak out and bang your head against the dressing room door, sit down and cry or jump around because you have a full house, then you go and give out three flyers. It’s better than nothing.”

12.15am Peter wants to hang out but is devoted to a sober Fringe (“for my sanity”) so retreats to bed. It’s not glamorous but it is fulfilling. “I’ve performed this over 600 times all around the world; in punk clubs, world art exhibitions and Sydney’s Broadway Shopping Centre,” he says. “The first Fringe I felt overwhelmed but I did it. You just have to push through.”