This musical couple discovered that home is where the recording studio is. 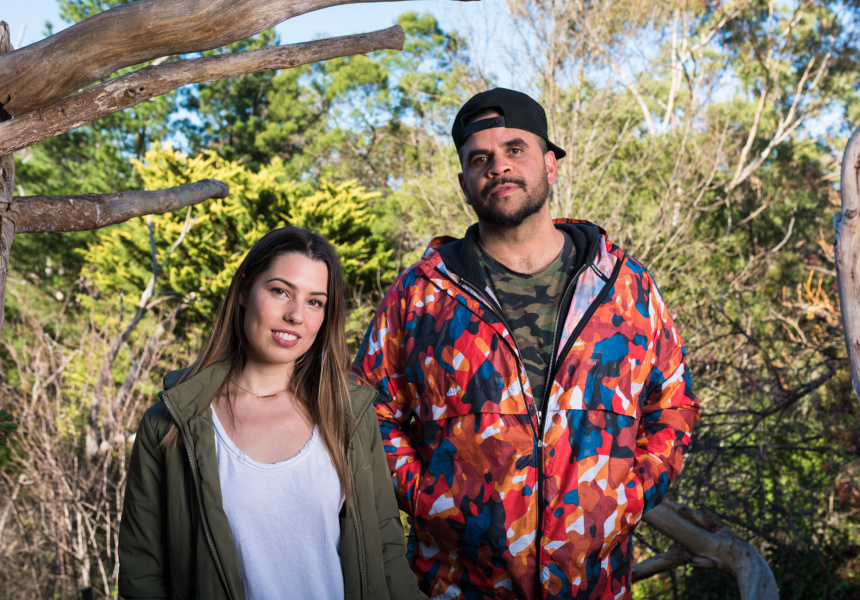 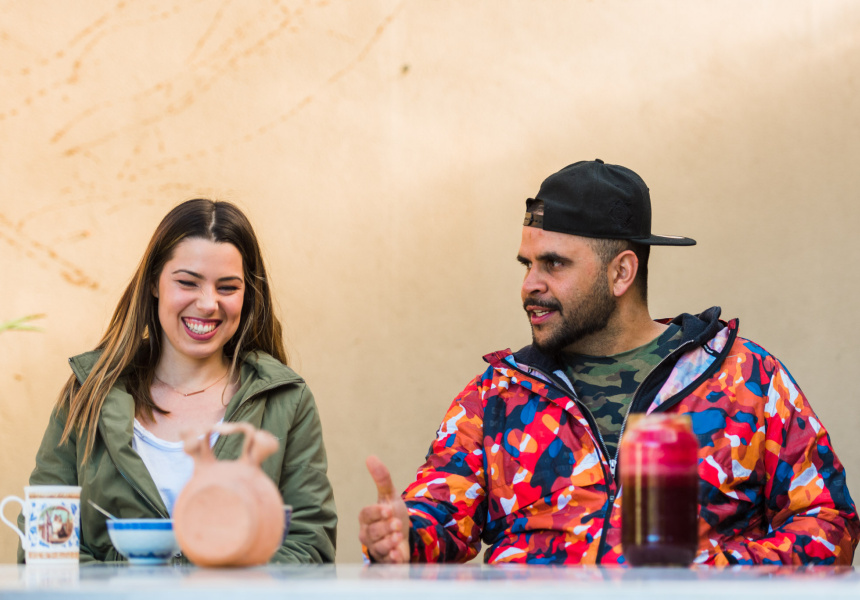 It was a cover of Bill Withers’s Lovely Day that brought rapper and producer James Alberts, aka Jimblah, and singer Georgia Humphreys together musically. “I sang the chorus, made my own harmonies, and then we put it on MySpace,” says Humphreys. It was a long time ago.

These days she goes by Goji, a stage name that comes from the phrase “Go, G” and is a nod to her favourite berry. It also suitably captures her pocket-rocket vibe.

The pair had known each other for years through Georgia’s older brother, mural artist Seb Humphreys, who encouraged them to meet and start making music together. He saw their shared love of hip-hop, and thought they’d have musical chemistry – but little did he know just how well they’d get on.

“We became really dope friends first, and then all of a sudden it just happened,” says Alberts. “Considering Seb’s my best mate since year five, we kept it on the low.”

He eventually caught on, and, needless to say, he’s cool with it. In fact, the three share a property together in Bridgewater. Seb lives at the bottom of the block, in a modified shed that looks like a cross between a treehouse and a hobbit-hut. The main house – where Alberts and Humphreys live and make music together – is at the top of the block, perched on the hillside overlooking a ghostly eucalyptus tree and the rolling bushland of the Adelaide Hills. A pair of galahs and a family of possums hang around an outdoor shower that sprawls across the deck.

It’s a sunny autumn day when Broadsheet drops in, but still crisp enough for the fire to be blazing inside the house. The living room is set up with recording equipment and photos of friends and family. On a mood board hangs the phrase Whatever You Do, Don’t Panic. It’s the name of their newly released debut album as duo Homeward Bound – a project that has served as both a literal and figurative homecoming.

After blowing up in 2012 with the release of his debut album Face the Fire, Jimblah launched into a chaotic schedule of recording, national touring and community work as a youth mentor. His blazing follow-up, Phoenix, was an album charged with emotion and catchy hip-hop tracks.

The lifestyle change was exhilarating, but something that Alberts was completely unprepared for. “It was hectic,” he says. “Every single emotion you can have is being thrown at you, and it’s zero to 100 the whole time. One minute, adrenaline. The next minute, exhaustion. Overwhelming drive. Crazy anxiousness.”

As an Indigenous Australian artist, the weight of responsibilities is even heavier. “Growing up, I knew the importance of having good role models and good mentors. But I never stopped to once ask myself, ‘Yo, what does this mean?’”

While representation is important, the soaring expectations placed on role models can easily surpass and disregard the humanity of the individual. Community members were quick to remind Alberts of the gravity of his actions and urged him to use his platform wisely. The pressure was stifling.

“The weight of so much pain and trauma, and so much of it is kind of lumped on your back,” says Alberts. “You feel like you’re out here carrying your whole mob on your shoulders.

“I’m a lot more understanding of why those things are at play now, but man, what a weight on your shoulders.” He decided to take a step back from the industry.

He called his mum, flew to Canberra, and spent many hours on country – healing, taking a breath, and putting the world back into perspective. All the while, Humphreys stayed by his side.

When the pair returned to Adelaide, they rediscovered the joy in creating music together. “It happened really organically,” says Alberts. After feeling boxed in as a hip-hop artist, it was a refreshing change to make music experimentally and have fun breaking free from the constraints of genre.

“He picked up a lot on my vibes and my inspiration, and the direction that I wanted to go in terms of production,” says Humphreys, who loves electronic and dance music. The result is an energetic album, with colour and texture drawing from different genres.

It captures the spectrum of their personalities – self-described opposites. “I’m an earth sign, she’s a fire sign. I’m heaps more introverted,” says Alberts. “And I’m more extroverted,” pipes in Humphreys, “but I think I bring him out of his shell.”

The sound is decidedly electronic but with solid hip-hop roots. There are moments of summery Childish Gambino-style pop and plenty of feel-good dance anthem vibes, with the odd blip from an 8-bit retro game and a jazzy sax. Stripped-back rhythmic tracks such as Red Dust Plain showcase the poignancy and power of Alberts’s lyrics.

The entire album was recorded in their home studio. “It’s super awesome, but sometimes it’s hard to switch off,” says Alberts. The key is to keep separate spaces for creativity and leisure. “But it’s dope because sometimes you get super inspired late at night and you can just roll straight in and record.”

Working creatively in a romantic partnership can add extra layers of difficulty. “There was a lot of arguing to begin with,” says Alberts.

“But I think we work really well together,” Humphreys adds, “and we each bring something so awesome to the union. Now, we’re able to collaborate really well.”

“Once we broke through that initial stage, it just became magic,” says Alberts. “I’m grateful for all of it because ultimately, it’s made me more patient, and such a better person.”

Whatever You Do, Don’t Panic inspires a sense of solidarity between all people. It’s about finding friendship and comfort in the face of the modern world and its political and social chaos. “Look, let’s not freak out,” says Alberts. “Sure, this is overwhelming, but if we freak out, it’s going to be a whole lot worse.”

Whatever You Do, Don't Panic is out now through Elefant Traks.