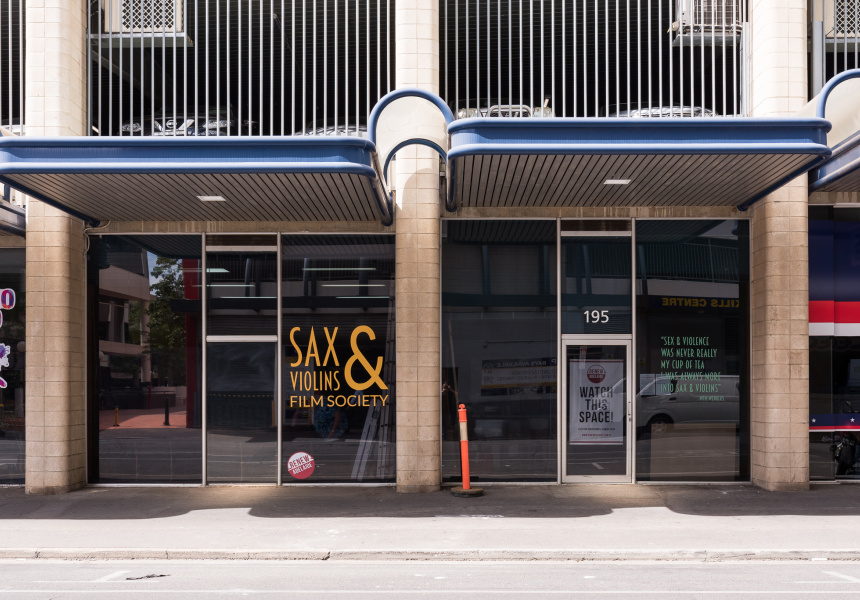 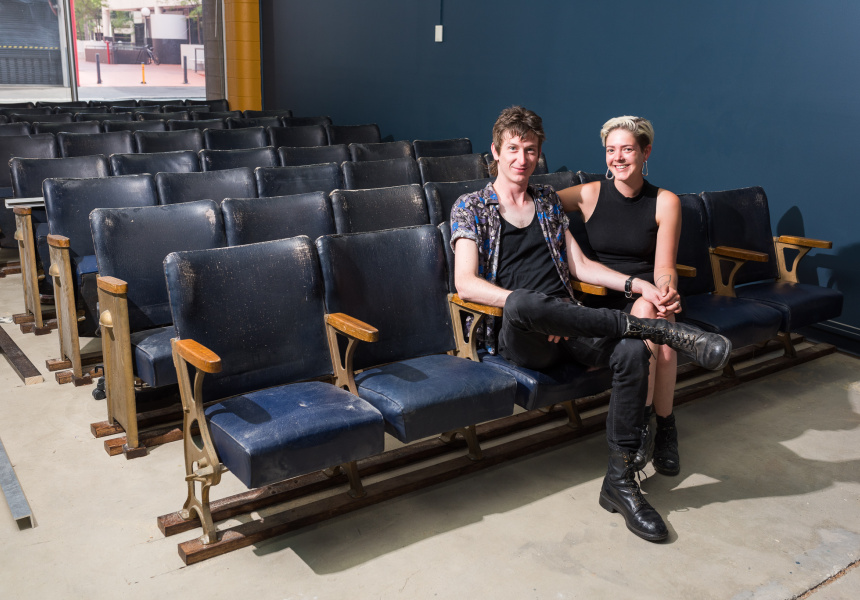 Broadsheet first reported on Adelaide’s changing cinema landscape in 2016. After a series of closures in the past decade, could it be we’re now seeing a cinema resurgence? Palace Nova recently opened a multi-screen complex in Prospect, and GU Film House has brought blockbusters back to Hindley Street. Sax & Violins Film Society, which opens later this month, offers something quite different.

Ashleigh and Christopher D’Antonio-Hocking’s 40-seater cinema and bar on Pirie Street launches on February 23. Sandwiched between a gym and a convenience store, it’s not only a spot to douse yourself in a wash of cinematic nostalgia, but to reconnect with the social aspects of film-watching.

For one thing, it’s bringing back intermission. Double-features will screen with a break in-between so audiences can hit the bar and chat about what they’ve just experienced. “It’s a chance to say, ‘I hated it. The next one had better be good’,” Christopher jokes.

The cinema operates on a membership model. Tickets are sold as four-session or six-month passes, similar to The Mercury’s Cinemateque program.

The idea to operate their own film house came to Christopher and Ashleigh as they mingled with friends after a screening of 1977’s Susperia. “Can we do this every night?” they wondered. A couple of months later, Renew Adelaide said yes. “They [Renew Adelaide] have been amazing,” Christopher says.

The full program has not yet been released, but expect a mix of retro classics and more obscure fringe titles. “We’re big fans of offbeat ’80s and ’90s horror [and] Aussie indie,” Christopher says. “We can’t say too much because we haven’t got all the screening rights yet.” The opening-night screening will combine the above in satirical horror Body Melt by Australian writer and director Philip Brophy. He’ll be there in person to launch the full program.

The venue itself is a blend of styles. Modern block colours dominate the bar area, which is separated from the theatre by a lush velvet curtain salvaged from a funeral parlour in the UK. It’s not the only lucky find to end up in the space. “Mum called me late one night and said, ‘Do you want 54 vintage theatre seats?’” Christopher says. An ad on Gumtree led him to a Freemasons Hall in Tailem Bend, and the seats now form the eight audience rows at Sax & Violins. A projector has been loaned to the pair by ACE Open – where Ashleigh works – until a permanent rig is obtained.

The bar will stock beer and cider from Sparkke Change and wines from Delinquente, as well as a rotating list of international producers.

The venue is named after Talking Heads track Sax and Violins, which appears on the 1991 Australian film Bis ans Ende der Welt (Until the End of the World). “It’s one of the greatest films ever, with an even better soundtrack,” Christopher says.