A festival-season guide for first-timers, gourmands and seasoned revellers. 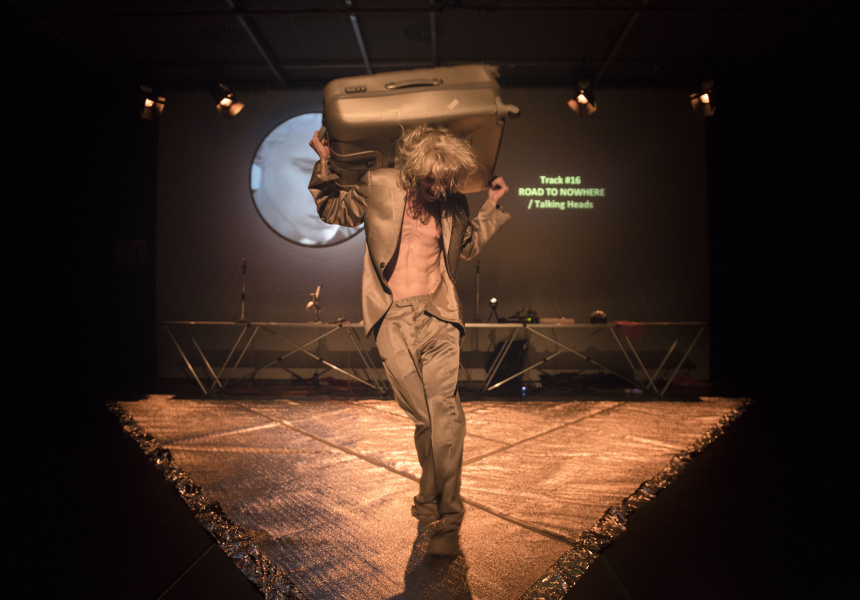 For even the most seasoned show-goer, festival season can be overwhelming. It’s a time when every available surface is plastered with performance posters, and the friendly folk of Adelaide start pushing flyers at you from every angle. Whether you’re heading to Adelaide Festival, Fringe or WOMAD for the first or 25th time – or you’re there for the food and parties –we’ve got you covered.

The Encounter
Calling The Encounter a one-man show seems a gross understatement. It’s technically correct, but this performance packs a mighty punch. It tells the tale of a National Geographic photographer’s encounter with an Amazonian tribe in 1969, using 3D audio to transport each audience member into the jungle. With no sets or costumes, the story is told through live performance, eerily real sound effects and interviews – all heard through your own set of headphones.
Dunstan Playhouse, Adelaide Festival Centre, March 7–9

Neil Finn
Adelaide Festival returns with its tradition of a free opening weekend concert. This year, much-loved singer/songwriter Neil Finn will kick things off with an open-air gig on the Riverbank. He’ll be dipping into his extensive catalogue, from his days with Split Enz and Crowded House to his acclaimed solo work. The show is all ages and free – get there early to claim a spot on the Elder Park lawns – known as the Parc Palais for the duration of the festival.
Adelaide Riverbank, Elder Park, March 5

Barbu
This “electro trad cabaret” returns to the Fringe after rave reviews in 2016.
Performed by one of the world's leading circus companies, Canada's Cirque Alfonse, and backed by a frenetic live band, Barbu encapsulates the very essence of Adelaide’s festival season. The high-energy and boundary-pushing show is inspired by the origins of Montreal’s circus scene at the cusp of the 20th century. Expect keg juggling, human punching bags, nudity and hair (the title of the show is French for “bearded”).
The Peacock, Gluttony, March 8–13, 15–19

Massaoke
If you’re struggling to come out of your shell, Massaoke (“mass karaoke”) is your cure. Nothing gets you into the spirit of Fringe more than a bit of interactive participation, and at Massaoke you and the rest of the audience are the stars of the show. A live band will guide you through a catalogue of fan-favourite anthems, backed by video lyrics, until your inner Fringe performer bursts free and you’re riding down Rundle Mall on the back of a unicyclist.
Magic Mirror Speigeltent, Garden of Unearthly Delights, February 17–March 19

For the Seasoned Pro

Onstage Dating
Seen enough Fringe shows as a passive audience member and ready to get into the action? Bron Batten is going on six dates this Fringe season – and you can join her. Batten will pick one audience member from the crowd (taking into account their pre-filled questionnaires) that she’d like to go on a first date with each night. They’ll go through three stages of courtship, albeit turbo-charged and under the audience’s gaze, guided by a series of intimacy-inducing questions.
The Speakeasy, Gluttony, February 28–March 5

White Rabbit, Red Rabbit
When have Whoopi Goldberg and John Hurt played the same character? In the extraordinary global play White Rabbit, Red Rabbit, where the actor doesn’t see the script until they walk on stage. The show’s creator Nassim Soleimanpour was unable to leave Iran and designed the play as a way for his work to travel, without the need for a set or director. Multiple viewings will pay off as a different actor gives their take on the script each night.
The Parlour, Royal Croquet Club, March 7–19

Gardens Speak
It’s hard not to feel the depth of someone’s story when you’re lying in the dirt atop their makeshift grave. This sombre and powerful sound installation from Lebanese-British artist Tania El Khoury tells the stories of 10 deceased Syrian protesters and activists through their own voices and retrieved sound material. Participants need to dig through the dirt, beneath 10 wooden tombstones, to uncover the individual oral histories. Queen’s Theatre, Gillies Arcade, Playhouse Lane, March 4–19

Digital Arcade
Do you ever wish your partner could see things from your point of view? While technology hasn’t evolved that far just yet, with Digital Arcade you can immerse yourself in someone else’s love story. This free virtual reality experience at the State Library comes from Crossover Labs in the UK and lets you strap on a headset to experience the inner lives of two characters through a series of immersive encounters.
Institute Building, State Library of South Australia, February 17–March 19

WOMADelaide
WOMAD may be a world-music and dance festival – this year’s line-up includes Archie Roach, The Waifs and Ethiopian band Nhatty Man & Gara – but it’s also a celebration of culture through food. Chef-in-residence Poh Ling Yeow will take over WOMAD’s Tasting the World Restaurant with a six-dish Malaysian banquet inspired by memories of her childhood. The Global Village is back with more than 50 food and drink stalls including favourites such as Govinda’s Pure Vegetarian, Ozzie Gozleme and Parwana.
Botanic Park, March 10–13

Long Lunch Series
The 1980s saw Adelaide’s food scene explode with a generation of chefs and restaurants that put the city on the culinary map. Thirty years later, the Long Lunch Series celebrates that time in Adelaide’s history by bringing together the chefs that shaped it and the ones inspired by it: Cath Kerry, Mark Best, Christine Manfield, Michael Ryan, Cheong Liew, and Karl Firla. Each chef’s lunch will consist of three courses designed to share.
The Riverbank Palais, Adelaide Riverbank, Elder Park March 4, 11–13, 18–19

Garden of Unearthly Delights
This year’s Garden line-up is as much about the food and drink as it is about the shows. The Deck returns with its own corner, slinging Espresso Martinis, DJ-spun tunes and barbershop haircuts. Pirate-themed Portside Sangriarr will be doing vegan food and lychee sangria. The Pigs on Fire is back, alongside Fringe favourites Voodoo Burgers, The Pineapple Bros, and The Garden’s ever-elusive Secret Bar. Gilles Street Markets has curated the market stalls, which will rotate on a weekly basis.
Garden of Unearthly Delights, February 16–March 19

Neon Forest
Look for a tunnel on Friday and Saturday nights at the Royal Croquet Club and you’ll be rewarded with a booming late-night base. There’s music blasted from the campervan-turned-DJ-booth, as well as speed dating, a kissing booth and a wedding ceremony, plus paint wars and a Drive-In playing movies around the clock. Head back outside the tunnel for RCC’s Mixtape Stage featuring The Aston Shuffle, Hayden James, Luke Million and Tkay Maidza. Pizzateca Discoteca does 12-inch pizzas and 12-inch vinyl late into the night.
Royal Croquet Club, February 16–March 19

MDLSX
The thing about parties is they don’t start until late. So if you’re going to see at least one show, make it a compromise with Silvia Calderoni’s gender- and genre-blurring combination of theatre, DJ set and memoir. Expect to hear some Vampire Weekend, Yeah Yeah Yeahs and R.E.M. dispersed between a feverish exploration of Calderoni’s real and fictional life. You might not be dancing, but you’ll feel like you’ve partied all night.
AC Arts Main Theatre, 39 Light Square, March 10–13

Riverbank Palais
In 1920s Adelaide, the Palais de Danse was a floating ballroom atop the River Torrens that was the place to be. Almost a century later, the Riverbank Palais has risen in its predecessor’s watery place with a stellar music line-up featuring Toro Y Moi, Kurt Vile, The Bamboos, REMI and Electric Fields. Alongside the Palais, in Elder Park, is the interactive artwork House of Mirrors, an outdoor, walk-in maze by Melbourne artists Christian Wagstaff and Keith Courtney.
Adelaide Riverbank, Elder Park March 2–19

Dark Matter
Many locals have felt spacey after a night out at Sugar, but never to this extent. This festival season, the late-night venue follows up 2016’s award winning themed bar Sato Roji with Dark Matter, a space-themed, multi-storey pop-up bar in the alley next door. Described as “Tron meets Blade Runner”, expect space-themed drinks, food and games (including U.V. ping pong) just a short walk away from the Garden and Gluttony – perfect for a post-show expedition.
Sugar, 274 Rundle Street, February 17–March 19