There are already locations in Sydney, Melbourne, Brisbane and Perth. The game itself is much like darts: face down the target and try to hit the bullseye – but with an axe. 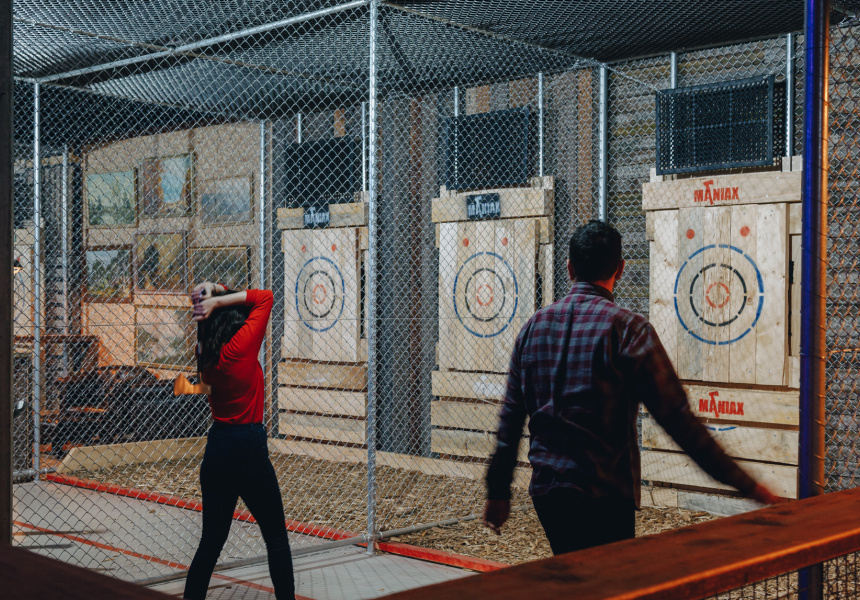 After a stressful day at the office, sometimes you just need to blow off some steam. You could go to the pub or a yoga class, sure. Or you could try hurling axes.

“It’s this high-pressure work ethic we have now where people are working long hours in stressful jobs,” says Adam Schilling, the man behind Australia’s first hatchet-flinging venture, Maniax Axe Throwing. “They come in here and they throw an axe and they just release.”

Schilling is opening his fifth outpost in Thebarton in July – following a delay due to Covid-19 – after opening Maniax warehouses in Sydney, Melbourne, Brisbane and Perth.

The enterprising airline pilot came across the popular sport while in Canada for a friend’s wedding. When that friend, Stephen Thomas, moved back to Australia, he and Schilling decided to start their own venture. “It started with beers, a bunch of different types of axes, mates and some … axe targets in my backyard,” says Schilling, who was living in Coogee in Sydney at the time.

The pair opened their first Maniax in Sydney in 2014 followed by a Melbourne venue in 2018, before Schilling bought Thomas’s share in the business. He’s since opened locations in Brisbane and Perth. Now Adelaide-based, he and wife Renee Schilling are bringing the concept to Thebarton, inside the former Coca Cola factory on Port Road (near the soon-to-open Bloom eatery by the Peter Rabbit crew).

The purpose-built 500-square-metre site will hold up to 100 people and house a four-tonne tree. Punters will be able to order pizzas and burgers, as well as beers from Young Henrys and a yet-to-be-determined local brewer – liquor-licence pending.

The game itself is much like darts: competitors face down a target and try to hit the bullseye, only using axes. It might sound violent, but the sport has become a hit for birthdays, hens’ nights and bucks parties, and corporate team-building. Think of it as an alternative to bowling or minigolf.

“People can just walk in on their lunch break or after they finish work,” says Schilling. “They can throw axes until they’ve had enough.”

For those looking to take it a little more seriously, competitors can join an internationally recognised league.