An upcoming videogame lets you race through the streets of Adelaide in a Metro Bus. 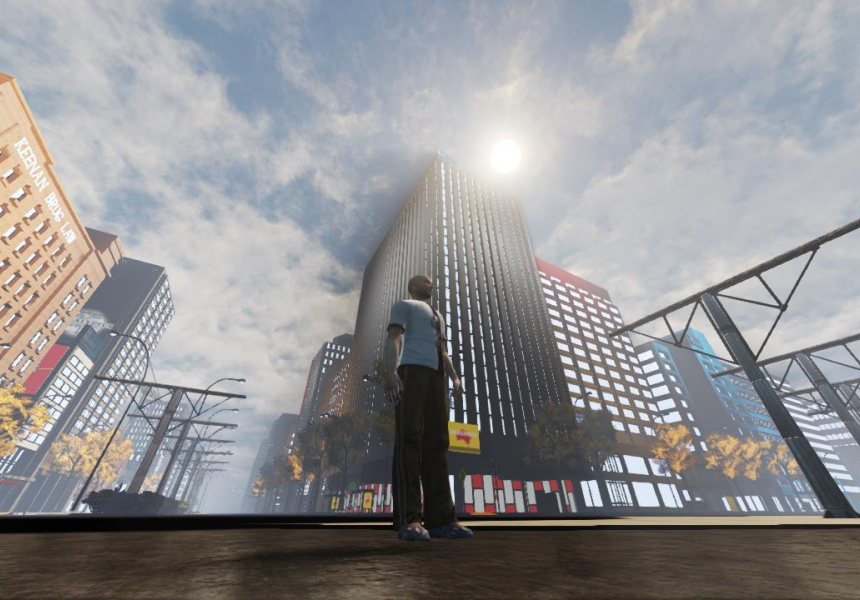 “You get to see the interior of the Munno Para shopping centre while driving through on a motorbike,” says Liam Keenan, developer of an open-world racing and adventure game set in Adelaide and its outer suburbs. “And Gawler, there’s the main street, Big W, multi-storey carparks. It’s weird – it’s my town.”

The P Platers world spans the northern suburbs of Gawler, Elizabeth and Munno Para to the southern hills of Blackwood. It features a faithful recreation of the Adelaide CBD (to scale) and condensed versions of North Adelaide, Port Adelaide, Glenelg, Semaphore and Hahndorf. When pushed for hints at specific locations in the game, Keenan says players can race past the Big Rocking Horse in Gumeracha, along with “a few other surprises”. He’s also recreated iconic locations such as the Adelaide Festival Centre and Elder Park Rotunda.

It’s an ambitious project but Keenan has been “hacking at it bit by bit” since 2014. A combination of Google Maps, Street View and personal reference photos has helped to ensure a level of accuracy – with some differences. Keenan, a full-time architecture student, describes The P Platers as “the perfect essence” of South Australia. He has reclaimed “classic” old buildings, such as the Old Spot Hotel in Gawler. So expect some local nostalgia, especially if it’s from the ’90s.

The inspiration for The P Platers came after fellow gamers expressed a desire to see Adelaide represented in open-world game Grand Theft Auto. But unlike GTA, there’s no overarching storyline. Instead players are encouraged to speak with the locals to access missions – a local punter at the pub might point you towards a nearby hoon race, or encourage breaking into a local Hungry Jacks to disrupt the corporate agenda. In keeping with the local aesthetic, Keenan approached The Hilltop Hoods for the use of their music – though perhaps too early in the process. “They did say the project looks good but [said they were] ‘unsure if Adelaide has enough crime for GTA’.”

Keenan is fiercely independent. He’s keeping tight creative control over the game, though he does encourage his growing community of Facebook supporters to provide suggestions – such as whether the in-game financial system should consist of “Dollarydoos” or “Bucks and Shrap” (the latter is currently winning but it’s still under debate).

His team recently expanded to incorporate a vehicle modeller, who has recreated Adelaide Metro trams and buses and SAPOL vehicles, in addition to Nissans, Mitsubishi Magnas, Holdens and “anything recently seen on Gumtree” for South Australia. “There are lots of utes,” Keenan adds.

Predictably, SAPOL isn’t too happy with the game’s depiction of its vehicles and officers. Channel 9 took a similar stance, attempting to link violent video games to incidents such as the recent attacks on London’s Westminster Bridge and Melbourne’s Bourke Street Mall.

The P Platers is scheduled for release later this year on the digital platform Steam.