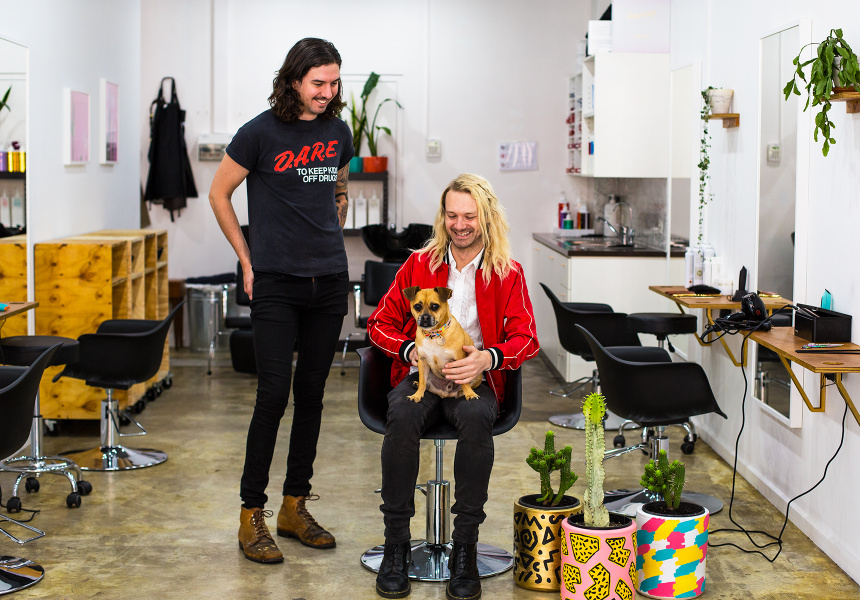 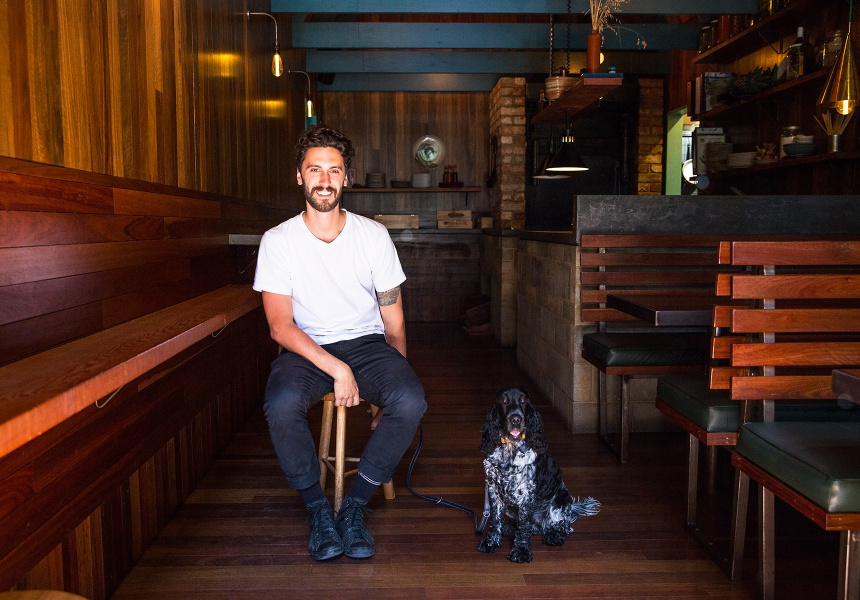 Behind every great mind is a great animal. We’re pretty sure that’s how the saying goes, anyway. We ventured into the creative spaces of Adelaide’s brewers, winemakers, artists and designers to meet the little buddies behind the business.

“Archie, who will be seven in February, is very affectionate, stubborn and inquisitive. He has a lot of energy so loves long walks, meeting new people/dogs and any kind of food. Our shop is named after him because our lives revolve around him and he can often be found hanging out the front of the shop.”

“Strings and her sister were rescued at around six weeks and fostered out by Ginger Ninja Rescue. At the time, Strings had fallen off a bed and injured her foot. While her sister was excited to see us and couldn't stop nipping our ankles and doing laps around the house, Strings sat still and patiently waited for us to say hello. She had a beautiful calmness and warm spirit about her that was too much to pass on. I’m lucky to have her by my side everyday. She's always stoked for strolls, sessions in the hills or riding shotgun on those long delivery days.”

“Tilvie is the absolute best. She is very cuddly and hops up on to the bed in the evening and waits for me so we can watch shows together. She loves to eat sultanas and small bits of carrot (as a treat) and she spends most of her time flopping around my and my partner's home studios. I love to just watch her go about her day.”

“Sheik is a 14-year-old human in a dog’s body. He's a man of habit. Loves a fresh carrot and piece of iceberg lettuce straight up in the morning. He's a simple fellow that just needs a good hug and walk round the block where he marks his favourite trees. He can't get enough of the beach – loves water, parks and long drives down to the south coast. Sheik broke his leg pretty badly when he was just six months old. He recovered and inherited a unique gangsta lean in his left leg, which sets him apart from all the other dogs in the park.”

“I’ve had her for thee years. I thought she was a boy at first but then she had four babies after spending some time with my parents’ male cockatiel. She comes with me everywhere. When she was a baby I sewed up a tube scarf so she could sit inside while I walked or rode places. She loves a neck scratch and will keep nudging you with her beak you until you pat her, just like a dog.”

“Buster is super sassy but also very adorable. Her presence is instantly calming. A good cuddle sets my head straight creatively and in life.”

“Brooklyn is a stubborn, naughty, weird, hilarious, awesome little man that just wants you to love him and give him your undivided attention. His crazy eyes and big smile always make you happy, and centres you when things are hectic. His likeness has made its way onto Delinquente artwork over the years. Brooklyn thinks and acts like he is a lot bigger than what he is. He has no fear, and he doesn't give up – try ripping his rope toy out of his mouth! I think he’s been a bit of inspiration for my brand; do what you want, never give up and screw what anyone else thinks.”

“Henry has many sides to his personality. He is a real sweetie, extremely naughty, a total chiller, a maniac and also a ruthless killer. He likes to do speed runs down the corridor, sleep 16 hours a day, hunt me at night, and lick my face at 5am every morning to feed him. He doesn't let anything get in the way of his sleep, meals and naughty behaviour. He also comes from a good family. His father, Indiana, was a two-time national champion. He inspires me to be more present and less concerned with everyday stress.”

“Wally is a very sweet, slightly needy boy. He frequently suffers from FOMO and always wants to be where the people are. Especially with my boyfriend Andy – they have developed a strange co-dependency. For instance, Wally will cry when Andy goes into the cafe to order and he's left waiting outside with me.”

“Basil is a funny little guy. Funnily, both of us are dog people, but we couldn't not rescue little Bas from the RSPCA Lonsdale shelter. It was love at first sight. We've had him for a year now and our house wouldn't be a home without him. He keeps us company while we're up late filling orders, and often runs off with scraps of leather, which we'll find hidden under the couch months later. We've just rescued a very small girl cat named Sage to keep him company while we're at work. They're in the 'getting to know you' stage – hissing and swiping at each other. Wish us luck!”

“We got Otis from a breeder out north, and picked him out because he was the only pup with an all-black head. My girlfriend and I refer to him as 'a nose with legs', as his life revolves around sniffing out food – leading him to eat plenty of things he shouldn't have like raw pizza dough, dark chocolate and rat-sack. We are super careful but he always finds a way. Obviously we have pet insurance. He's affectionate, inquisitive and talks a lot. He's been my buddy in the studio since I started practicing on my own. Officially, he's Sans-Arc’s design assistant, he's just useless with a mouse and keyboard.”