George Floyd’s death in Minneapolis shook the world and forced Australians to take a closer look at Indigenous Australian deaths in custody, police brutality and systemic inequality on home soil. On Saturday, protestors in Adelaide took to the streets to have their voices heard. 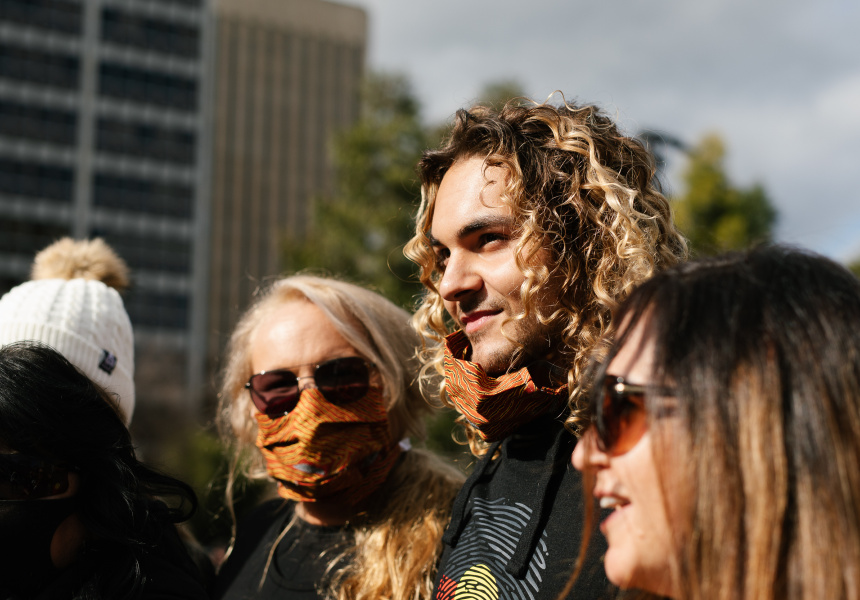 No justice, no peace. No racist police.

Those were the words chanted by an estimated 5000 to 6000 people who gathered at Victoria Square/Tarntanyangga on Saturday in solidarity with the global Black Lives Matter movement. The police killing of American man George Floyd, in Minneapolis, has brought systemic racism and violence against Indigenous Australians – in particular the 437 Indigenous Australian deaths in custody since the 1991 Royal Commission into Aboriginal Deaths in Custody – into sharp focus.

Indigenous activist group SOS Blak Australia led the rally alongside the Adelaide Campaign Against Racism and Fascism. Although a coronavirus exemption for the large gathering was granted by South Australia’s police commissioner, the risk of Covid-19 was front of mind: many protestors wore face masks, and several speeches referenced the virus.

“We’re talking about Covid-19, but what about all the deaths that we’ve had in our communities? What about them?” Elder Susie Dixon asked the crowd. Her brother Kingsley Dixon died in prison in 1987. He was 19 years old at the time. “We matter,” she said. “Black lives matter.”

Cheryl Axleby, a Narungga woman and CEO of the Aboriginal Legal Rights Movement drew the crowd’s attention to one of many protestor-made signs decrying Australia’s record of Aboriginal deaths in custody. “Not one conviction,” she pointed out. “No one’s been held accountable for all of these deaths in this country. It’s shameful. Black lives matter – yesterday, today, tomorrow and always.”

Raising the age of criminal responsibility would be a start, according to Ella Russo. Her brother, Wiradjuri, Kookatha and Wirangu man Wayne Fella Morrison, died in custody in 2016 while being held on remand at the Yatala Labour Prison. “People must know that Australia’s age of criminal responsibility is 10 years old. That is the age of my son,” she says. “Children are being locked up and brutalised in prisons. Statistically, my son is more likely to be incarcerated than complete high school. Until [Indigenous people] revolt, and until white people see their power and revolt alongside us, there will be no future for our children that is safe, loving or lively.”

Another speaker, 76-year-old Kaurna-Narungga Elder Yvonne Agius, said police brutality has become worse in recent years. “When we had problems with the police [in the past], they weren’t as rough… not like now. It’s so different. Why do they have to bash people? Why do they have to put so much pressure on our people, when they’re just going along peacefully? … The way they handle our young ones – going around to houses at all hours of the morning, when they’ve got young babies in the house. Something’s gotta be done. The government’s got to wake up and start doing something for our people.”

When rally organiser and actor Natasha Wanganeen took the microphone, she referenced a 1984 television interview in which mining magnate Lang Hancock suggested a “solution” to the “Indigenous problem”. “The solution ... was to put poison in our water. Eventually our men would become sterile, and we would breed ourselves out,” Wanganeen said. “That was the year I was born. I almost didn’t make it, and thank the ancestors I did, otherwise we wouldn’t be here right now. I have an issue with the government that’s running this country – and it’s very fucking personal.”

BIPOC (Black, Indigenous and People of Colour) artists also made impassioned speeches. South Sudanese rapper Gabriel Akon, who records as Dyspora, spoke of being raised in refugee camps before coming to Australia at age 10. “When I stand here and I see human beings from every part of the world standing with us and walking with us – this is humanity,” he said. Pintupi and Luritja poet Celestine Rowe read from her work: “We bleed the same / but we’re not treated the same.”

Auslan interpreters worked to make the rally accessible for the signing Deaf community. Samantha Wilson, a deaf Muthi Muthi woman, told Broadsheet the rally was particularly cathartic for her. “All these different voices are so important,” she said. “And having an interpreter at the event – without that, I wouldn’t have had any emotion; I wouldn’t have understood what was happening. Hearing stories, it’s very hard to hold back the tears.”

“We miss out on a lot, because we don’t get to see what happens on television, in other areas. We don’t have it in our language,” added Wilson’s housemate, Adnyamathanha woman Monica Hardie. “I’ve been incarcerated myself before. When they take your hands behind your back – that limits my ability to communicate... They never bring in an interpreter in those situations, either.”

Protestors marched from Victoria Square/ Tarntanyangga to the northern end of King William Street, and back again. The march teemed with Aboriginal flags, and other marginalised groups – like the Uyghur and Palestinian communities – brought their flags in a show of solidarity. Motorcyclists from Black Death Australia drew cheers from the crowd as they rode down the street, and pockets of people began to dance after marching.

Saturday saw the full spectrum of human emotions on display. There was plenty of anger, and frustration – but also a sense of hope. It was the first time in months that people gathered in such numbers, and you could glimpse as many smiles as you could tears.

But what do we do with it all? Samara Fernandez-Brown, whose cousin Kumanjayi Walker was fatally shot in his home by a police officer last year, urged protestors to continue their activism after the protest. “The fight does not end here… When we leave here, we need to continue to fight, we need to have those conversations, we need to call people out,” she said.

“We will stop protesting when you stop killing us.”

A second rally will be held at Victoria Square/ Tarntanyangga on Saturday June 13 from 12pm. If you’re looking for other ways to show your support, you can donate to the following causes: