Urban beekeeping – it’s a thing and it matters. Here’s why. 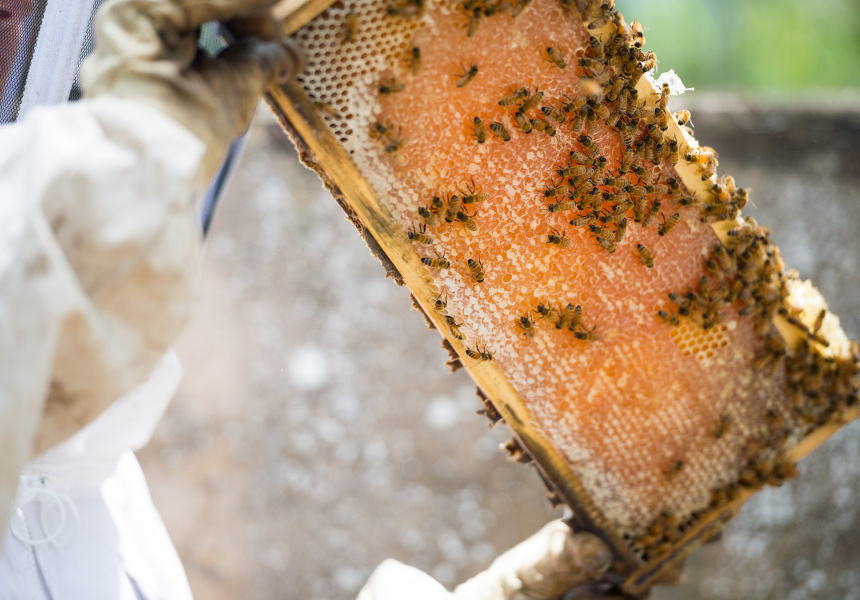 The importance of bee colonies to a healthy ecosystem is well known. But most people are still uncomfortable – or downright terrified – around them. Adelaide apiarist Sandra Ullrich is trying to change that.

Since 2015 she’s placed a number of beehives in prominent public spaces, which could be cause for concern, but when serviced compassionately, Ullrich says, will bring far more benefits than danger. They’re at the Intercontinental Hotel, Government House and the rooftop at the Adelaide Showgrounds, and the number of hives maintained by her Adelaide Bee Sanctuary is steadily building.

Before installing a hive, Ullrich checks the swarm for “personality” in her own backyard. Tame colonies can be positioned on rooftops or in backyards. Feistier communities are relocated to less-populated regions.

Each hive is very different, but the swarms produce roughly 30 to 50 kilograms of honey per year, although 2016’s slow start to summer has meant a lower-than-anticipated yield. Her backers include Karah Hogarth, who runs Pickle in the Middle and who has sponsored a hive for several years. The honey it produces is used at the cafe.

“Our hive is on a cherry farm in the Adelaide Hills. It’s managed by Adelaide Bee Sanctuary and [made possible with] financial support we provide,” Hogarth explains. “We participate to help support non-commercial bee populations.” Hogarth says she initially hoped to position the hive nearby in Unley, but the landlord didn't go for it.

Surprisingly, Ullrich says, “Most of my corporate partners aren't in it for the honey”. Though obviously it’s a sweet bonus. Mainly it’s about population conservation. The sanctuary prioritises sustainability over maximum honey production. And Ullrich prefers local queens to specially bred species that produce more eggs – and therefore more workers and more honey. “I’ve been working with the City of Charles Sturt for a while now,” says Ullrich. “They originally wanted a Golden Italian, but now sponsor a local queen.”

“Almost every other council lists bees as ‘pests’, and I’m trying to change that through encouraging them to sponsor a hive and open up the conversation.” She also lobbies local governments to work with the Urban Beekeepers Collective, which can safely relocate an inconvenient swarm rather than exterminate it. Often at a much lower cost.

Ullrich mostly tends the hives alone, but occasionally she hosts workshops at which people work alongside her in the field and learn “how to be around a bee”. She is also partnering with Government House and The Adelaide Showgrounds to provide regular community-engagement programs.

Ullrich took to beekeeping to allay the stresses of her day job lecturing at The University of South Australia. She built her first backyard hive in 2012, which soon became three, then nine, then, somehow, 18. She approached the Adelaide Zoo when she urgently needed to rehouse her growing population, and it agreed to install a hive on its grounds. She now services 45 hives across Adelaide.

After supplying sponsors, surplus honey is sold directly to consumers from the Adelaide Bee Sanctuary website, which also has information about becoming a hive sponsor.