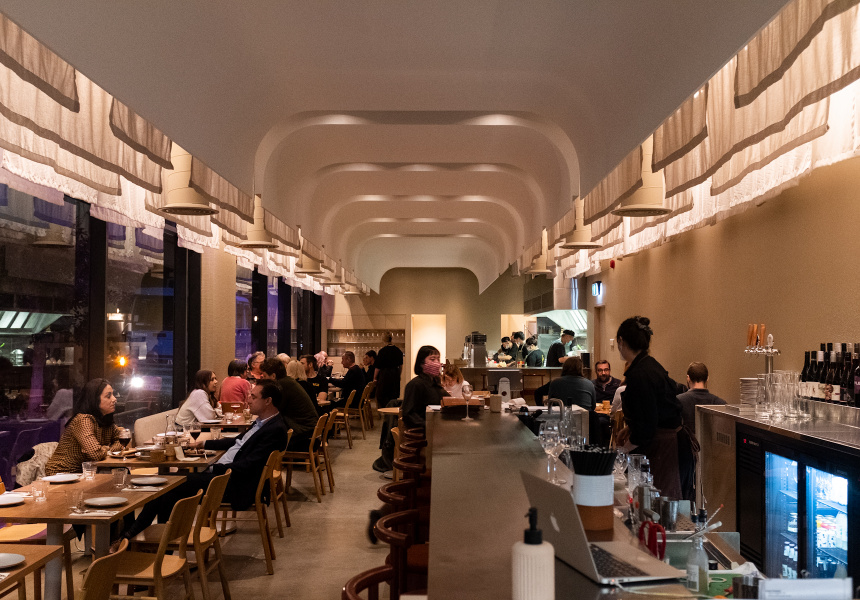 Named after Bangkok’s famous street-food market, Soi 38 first opened on Pulteney Street in 2014 with a roving focus on Thailand’s six major regions. It was a step up for co-owners Daisy Miller and Terry Intarakhamhaeng, who started the business as a street food-stall at Womad before settling into their slimline CBD space.

They stepped things up again in 2021, graduating to a bigger space on Pirie street and repurposing their Pulteney street original into a street-food spin-off called Fire x Soi 38.

The current, albeit familiar iteration feels like the restaurant it was always meant to be. The former Subway, on the corner of Pirie Street and Coromandel Place, was transformed by architect firm Walter Brooke into a warm, inviting space enhanced by a striking barrel vault ceiling flanked by curtains inspired by Thai prayer flags (before his cheffing days Intarakhamhaeng was a Buddhist monk).

An open kitchen lets guests sit ringside and peer into the fire-fuelled theatre of Intarakhamhaeng and head chef and business partner Pui Kannika. And despite the relative minimalism, plenty of thought and care has gone into the fit-out. The tables, chairs and steel bar tops are by Remington Matters; the brown bar stools come from Jam Factory; and the bar itself – with its rammed-earth aesthetic – is by Love Concrete.

The menu delves deep into the regional foods of southern and western Thailand (and the country’s ethnic minority groups). A grilled section draws from northern and north-eastern Thailand, where you might see game meats such as venison (grilled and served with nam jim and tomato paste) and wild buffalo (served as tartare). Intarakhamhaeng and his team also draw from the local landscape with kangaroo tail (in a Penang red curry), marron (served with pork belly and vermicelli) and pipis (with chilli crab oil).

An elevated drinks menu comes courtesy of Miller’s brother Oscar, who joined the team after a stint Europe working at wine bar Vino Teca in London and winery Bruno Rocca in Italy.