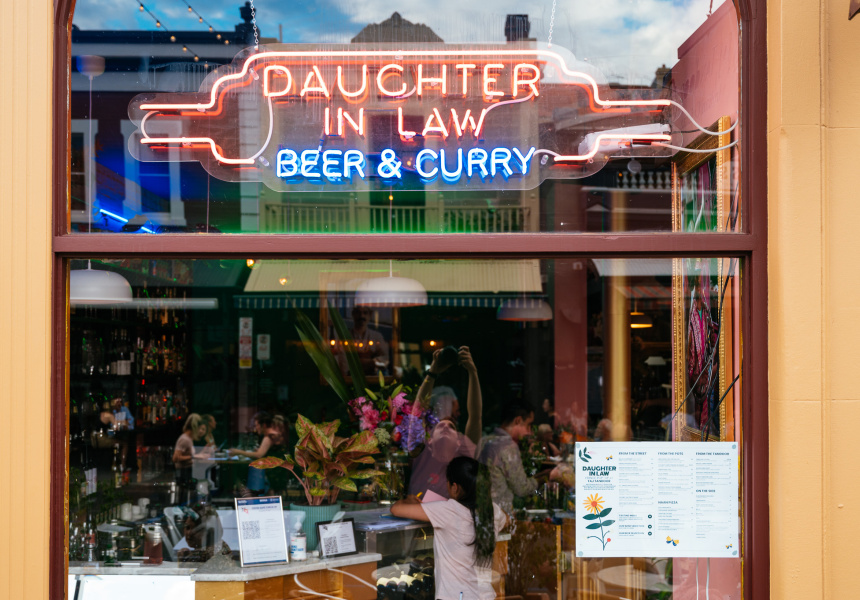 It’s rare to hear a chef touting their “unauthentic” food. But Jessi Singh, the owner-chef behind Adelaide’s new Indian diner Daughter in Law, reckons there’s no such thing as authentic Indian cuisine. According to Singh, because of the prominence of home cooking in India – which often focuses on thousand year old dishes without set recipes – there are barely any dishes in Indian cuisine with universally agreed-upon ingredients or techniques. So it's all unauthentic.

Singh opened a string of acclaimed eateries in Melbourne with ex-wife and then-business partner Jennifer Singh: Dhaba at the Mill, Horn Please and Babu Ji. They sold them all before moving to the Big Apple in 2014. The pair went on to open Mrs Singh and Daughter in Law in Melbourne and Don’t Tell Aunty in Sydney. So this is a sequel of sorts to the Melbourne original.

Daughter in Law’s menu combines an array of Asian and Western influences with a focus on bold flavours. A must-try dish is the “balls of happiness” (gol gappa), spheres of fried flatbread and a perfect union of creamy, sweet, sour, and spicy flavours. Another essential starter is Colonel Tso’s Cauliflower, Singh’s best-known dish. The Indo-Chinese creation is a mound of fried sweet-and-sour (and spicy) cauliflower. There’s also a range of naan pizzas, Indian fried chicken, and grilled tandoori dishes such as jumbo prawns, lamb chops, whole corn and roasted snapper.

The extensive wine list includes local producers alongside interstate and overseas drops. All beverages, including a line-up of beers and ciders, can be found in self-serve fridges, while a roving trolley brings champagne and whisky direct to each table. For cocktails, there’s an Indian spiced sangria – a mixture of red wine, sweet vermouth, and orange – as well as the Daughter in Law, which is made with gin, a tandoori-fired pineapple and cardamom lime.

Daughter in Law’s vibrant and colourful interior is a wash of light pink, with plush blue seating, splashes of greenery, and gold finishes (a colour that traditionally symbolises wealth and prosperity in India) on interior ornaments and cutlery and by the front bar. Silent Bollywood films projected on the walls and contemporary Indian music boost the already-lively ambiance.