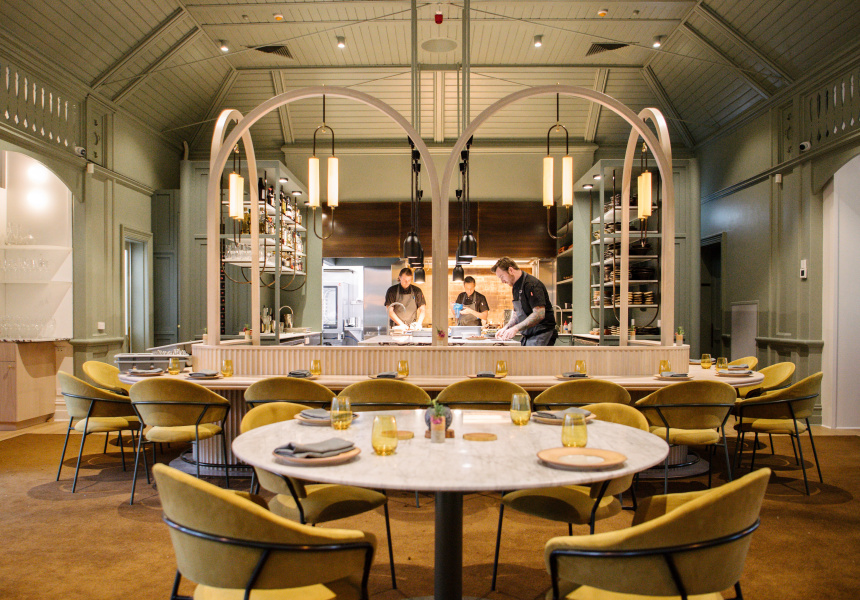 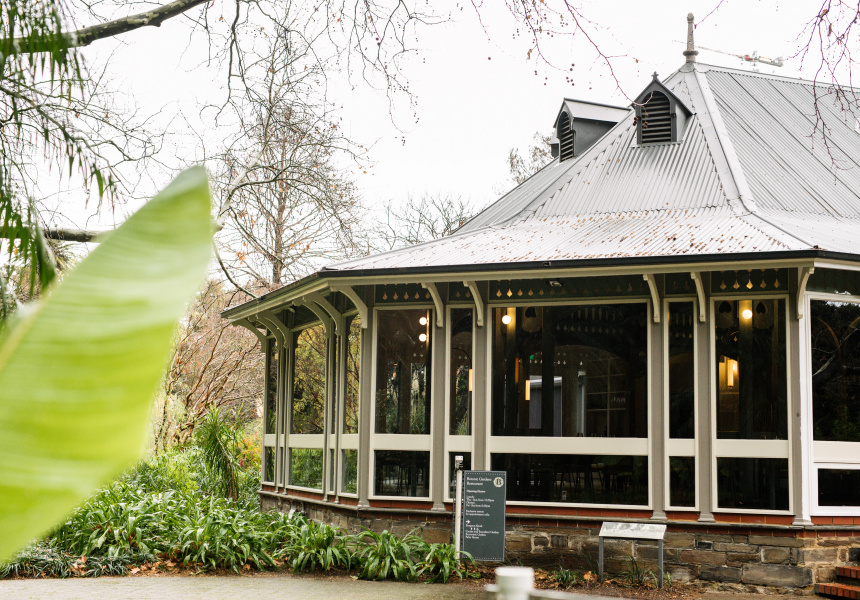 Botanic Gardens Restaurant had long been one of Adelaide’s best dining experiences. But as of 2021, the dated interior of the former tearoom was in desperate need of a revamp. After a month-long closure, the renamed Restaurant Botanic reopened in July with a new open kitchen and hearth; a curved chef's table with 12 seats watching the action; a 650-bottle wine cellar; and a refreshed dining room.

Also new, was the appointment of Justin James, former executive chef of celebrated Melbourne restaurant Vue De Monde. Before that, the US-born chef did stints in the kitchens of Noma, Dan Barber’s Blue Hill at Stone Barns and Eleven Madison Park.

James also proposed the extensive renovation, carried out by designer Designer WBL (Williams Burton Leopardi). The design concept takes inspiration from the surrounds with tones of green and brown and natural elements such as timber, marble, leather and stone (cutlery rests by local furniture maker Peter Fong are made from reclaimed timber that James sourced). There’s also a ceiling installation of foliage from the garden that changes seasonally.

Straying from the usual restaurant formula, the team at Restaurant Botanic have their hands in every aspect of service. That means the head chef might make your cocktail or pour-over coffee. And James doubles as the general manager.

James and his team have drawn up 12 menu iterations to cater for any dietary requirements. Guests can choose from two menus – the short path or the long trail – which might feature marron (head and all) with fermented chilli and lemon myrtle from the garden; locally grown mushrooms with a 30-day fermented vegetable paste; dry-aged Murray cod served with fermented and fresh truffles and a koji- and anise-myrtle sauce; and duck-fat biscuits (scones) with 30-day-cultured butter and “clam jam” (it’s like jam but with clams).

The kitchen’s open fire touches every dish in some way, and ferments play a key role in the menu, too, with more than 1500 kilos of produce, sourced directly from the gardens and local growers already fermented or preserved ahead of the reopening.

These ferments factor heavily in the “temperance menu” – a selection of non-alcoholic drinks including kombucha, infused juices, garden blend teas, mocktails and more. If it’s booze you’re after, there’s an extensive list of new- and old-world wines. Cocktails might include a koji Old-Fashioned, wattleseed Espresso Martini and a Chef’s Negroni with mezcal, whisky and Campari.