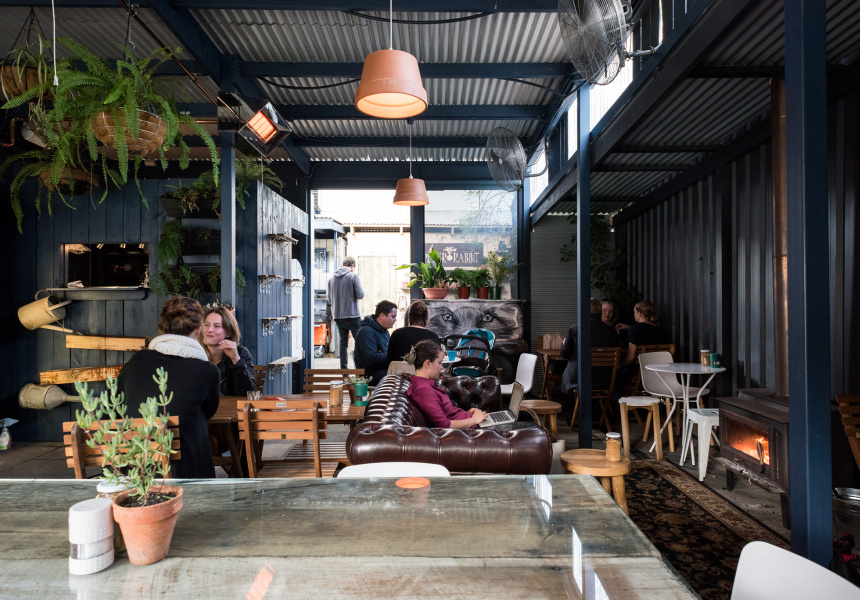 At first, long-time mates Jack Nelligan, James McIntyre and Dan Morton just wanted a tiny coffee shed and some lawn. But when they found out the drab concrete park across from University of South Australia was owned by SA Power Networks and not the council – which might have cramped their style – they acquired the lease and dreamed bigger.

Now, the corner block holds a lush garden filled out with lemon and avocado trees. At the rear, there’s a well-appointed shipping-container-turned-cafe, with herbs planted on the roof. It makes for an almost comical contrast with the humming electrical substation next door, whose indefinite expansion plans may one day turn Peter Rabbit grey and concreted again.

Until then, this is one of the most relaxing spots in town. When the weather’s fine, it's hard to beat a brunch cocktail, local beer or wine on the deck, or at one of the solitary lawn tables. If you really want to reduce your blood pressure, head for the small enclosure out back for a play date with the resident rabbits, Flopsy and Mopsy. They arrived after the name Peter Rabbit, which itself nods to the garden concept.

Nelligan (a trained physio, now self-taught chef) keeps it simple in the mornings with toast, croissants, granola and poached-egg dishes. From 11am he looks further afield to plate up pulled lamb in a brioche bun; spinach-and-feta quiche; chicken tagine; and salmon-and-potato salad with olives. Pair with a 1645 coffee or fresh juice and you’re set.