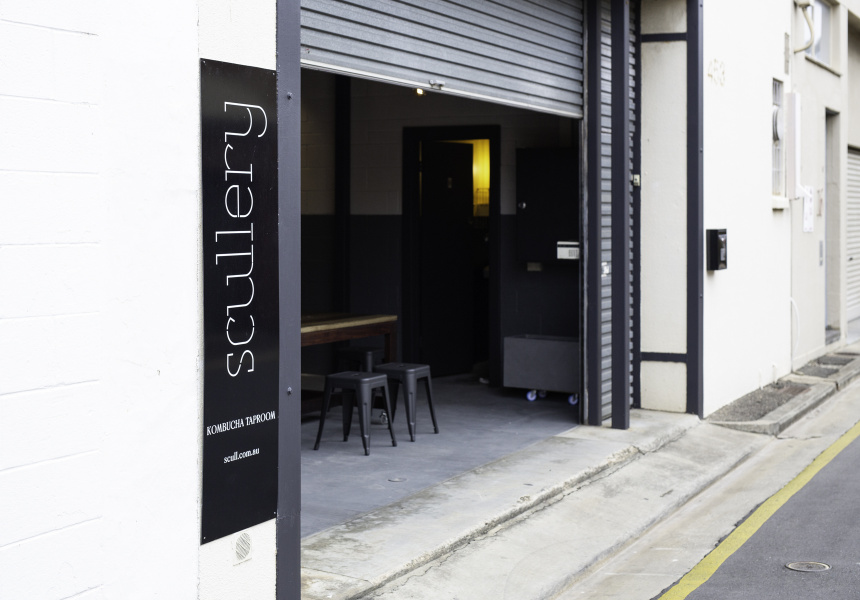 When Coca-Cola bought Adelaide’s Mojo Kombucha in September 2018, it made sense for smaller producers to worry they’d be muscled out. Instead, local kombucha company Scull – by owners Damian Foo and Sharon Lam – saw a spike in sales as cafes switched out the newly multinational brand for a more local product.

The production facility and taphouse features a polished-concrete bench by Love Concrete atop a bar made from reclaimed wood. Behind are six taps Foo installed himself.

Kombucha is essentially fermented tea. Foo started out with a Cooper’s home-brew kit. Now he brews 400-litre batches in this dedicated production facility. The attached taproom is a place for him to experiment with flavours.

Six taps pour a core range, from the sweet elderberry, ginger and turmeric, to the more savoury hojicha (a roasted green tea that Foo describes as “a little nutty, a little caramel-y”). These sit alongside a couple of seasonal varieties that make heavy use of market produce. Previous brews include nectarine, spiced fig, and strawberry and mint.

All the brews start with a Japanese-style green tea from Victoria. Green tea is more delicate than black and allows the other ingredients to shine, though there is one blend of green and black tea called “noir”.

Kombucha is available in large glasses or on tasting paddles. There’s no kitchen but Foo and Lam are happy for guests to order food in.