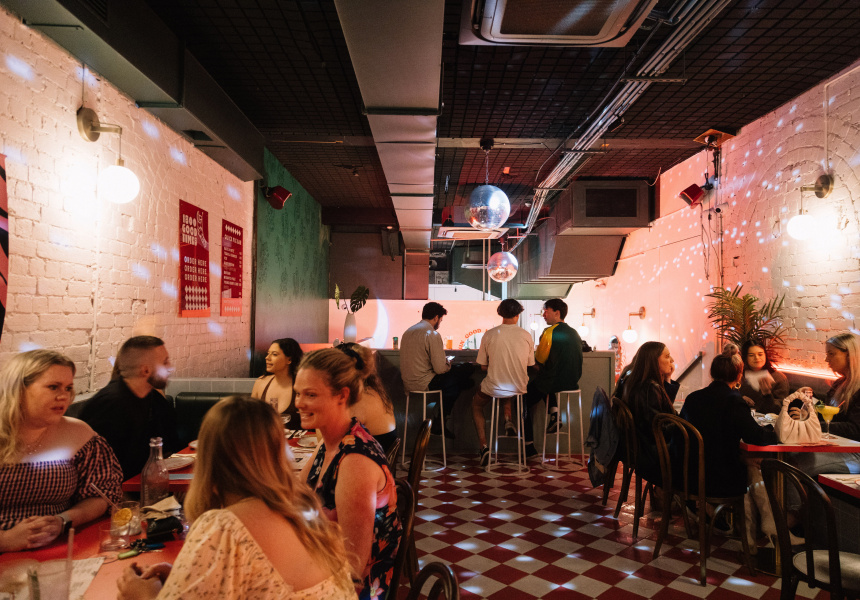 The Asian-leaning burgers at Gang Gang are far and away some of Adelaide’s best. But at the team’s late-trading bar and restaurant on Hindley Street, they give a nostalgic nod to the United States instead, courtesy of co-owner Nina Hadinata’s time spent living in Los Angeles.

While the Asian throughline found at Gang Gang is less prominent here, inspiration from across the Pacific comes in other forms. You might see cheeseburger dumplings; beef rendang served in mini hoagie rolls; and crisp onigiri-style rice “toast” served with Nashville hot chicken pieces, avocado and house-made dill ranch.

The summer-ready drinks list is big on classic cocktails. Expect Mojitos and Mai Tais alongside tropical creations (the Pandan Pina Colada and gin-based Melon Highball are past highlights). The wine list is local but for a handful of French options, and there’s also a selection of shooters and beers.

Interiors are a blend of American diner and Havana styles. Red and white tiles evoke US burger chain Five Guys, while paintings of tigers (Gang Gang’s logo) remind you whose house you’re in. After the dinner trade each night, the venue turns into a space for dancing, with a floating DJ booth overlooking the dining space and a shining disco ball above.