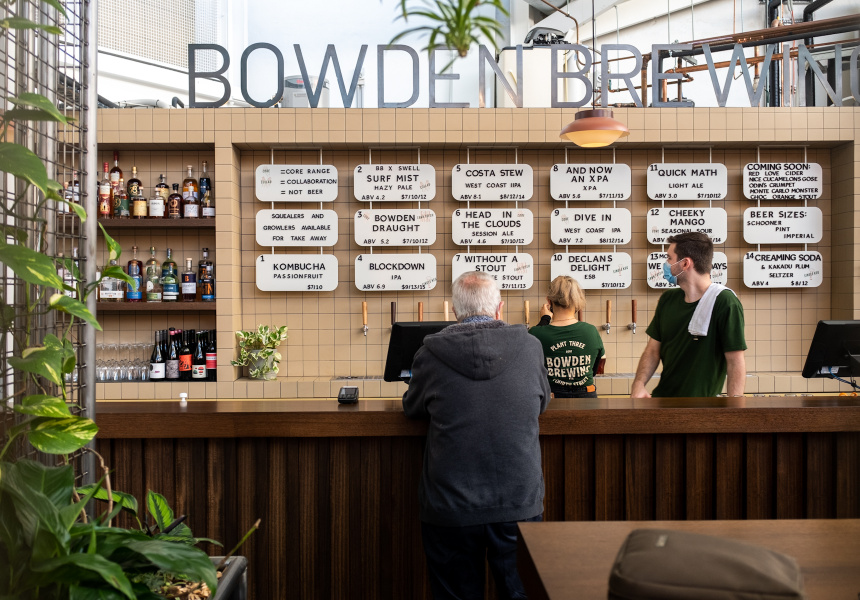 When Alex Marschall, Joshua Talbot, Matthew Orman and Oliver Brown wanted to open a brewery in 2015, they lacked the start-up capital to purchase the brewing equipment. So they opened craft beer bar Nola instead – but all the while their original concept was still brewing in the background. Bowden Brewing Company finally came to life in 2021 with another business partner, Jake Phoenix, along for the ride.

Housed inside Plant 3, the 14-tap bar pours a range of beer styles, including the core four: an easy-drinking Bowden Draught; a hoppy session ale; a big, bold and bitter West Coast IPA; and a fruited sour that changes with the seasons.

The drinks are backed by food from executive chef Harry Bourne, who’s designed a menu of “untraditional” Mexican- and Central American-inspired cooking. At Masa, named after the maize dough used for tortillas, you’ll find a selection of tacos and tostadas. House-made corn tortillas topped with blood sausage with pickled red onion and battered Port Lincoln flathead with green salsa are both potential options.

You might also find barbequed Nomad Farms chicken and charred Ngeringa cauliflower off the wood-fired grill, plus snacks such as fried school prawns with popcorn and garlic mayo; pig’s head croquettes with refried beans; and chargrilled corn with black garlic butter and pecorino.